Michael Mantler - The Hapless Child and other inscrutable stories 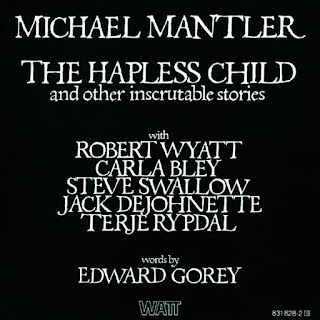 I do not normally review old albums, unless they are part of my long neglected Formative Years series, but this oddity deserves some exposure.

Until about a month ago I had never heard of this album, but during a visit to my good friend and gig-going companion Phil's abode up popped this dusty obscurity.

Some of you may well be asking Michael who? Well, it seems that this could well be the rarest album starring Robert Wyatt out there.

Let me explain; Michael Mantler is a composer, band leader and trumpeter in the contemporary jazz field. Married to celebrated jazz pianist Carla Bley at the time of this record (1975) they had also set up their own label WATT to release their projects, which included this little gem.

Setting the unsettling illustrated stories of writer Edward Gorey to music, Mantler assembled a top notch backing band for Wyatt's semi-spoken narratives, a style that scans where it shouldn't as anyone familiar with his solo work will know well. Also contributing narratives are Robert's wife Alfreda Benge, Nick Mason and Albert Caulder.

Gorey, who died in April 2000, was an odd character by all accounts, releasing his early works under sundry anagrams of his name such as Ogdred Weary, Dogear Wryde, and Ms. Regera Dowdy to name the 3 quoted on Wiki, and there were many others too, apparently. His stories read like they were written in Victorian times under the influence of laudanum and misery, often as not featuring sad children and an air of menace, and steeped in very black humour. This from the Poe-like title track:


"Her mother fell into a decline that proved fatal.
Her only other relative, an uncle, was brained by a piece of masonry"

The opening track is probably the spookiest, a story of a spirit falling through a house:


"Morose, inflexible, aloof,
it hovered just above the roof.
It's gone right through and come to rest
On great grand-uncle Ogdred's chest"
﻿

They are very odd indeed, and all "sung" in Robert Wyatt's unmistakable style. Hopefully you can click on the image below and enlarge it for more enlightenment.


Robert Wyatt's character is so deeply ingrained in this record it almost feels like a long lost Wyatt solo album to me, and because of that I am more than happy to attempt to describe its many delights to you. Some of these are the unusually acidic guitar interjections from the sublime Terje Rypdal, sending flying shards of slightly reverbed notes over the heads of the other players, so fans of the great guitarist are also in for a treat.

Carla Bley's piano forms the base of the tunes with colour added by the "string synthesiser"; is this a Mellotron you may ask, and I wonder that too.

Jack DeJohnette should need no introduction and with bassist Steve Swallow, who has a jazz CV as long as an extended trombone, they create marvellous counter-rhythmic textures for Terje and Carla to extemporise over. Nowhere is this more evident than on the blistering attack of The Object-Lesson. Terje had not been this animated since his first solo outings in the 60s. Marvellous stuff!

If you ever come across this and you're a Wyatt or Rypdal fan, buy it. Unfortunately the CD is long out of print, but you never know, it might just turn up here: www.secondspin.musicstack.com