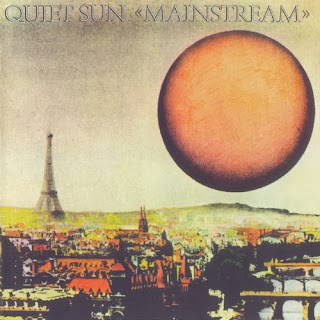 On downtime from working with Roxy Music, Phil Manzanera took the opportunity of the 26 days afforded him over a period spanning late December 1975 and early January 1976 to finally record an album with his pre-Roxy group Quiet Sun. Possibly because Mainstream was recorded without his label's knowledge, for as far as they knew he was working only on Diamond Head, it received little promotion, and maybe for this reason it went under my then youthful radar, these being decades before the instant info access era of today.

It was not until some ten years later that I bought this LP, and since then it has remained a firm favourite. When you consider the dozens of carbon copy unimaginative rock bands in the UK at the beginning of the 70s who were given contracts, even if only for one album, it is frankly astonishing that Quiet Sun were never snapped up.

The band evolved in 1970 out of Manzanera's college group Pooh and the Ostrich Feather - a wise choice of name change, methinks. They consisted of Charles Hayward, later a founder member of experimental post-punk combo This Heat on drums, keyboard player Dave Jarrett who later became a maths teacher, and bassist Bill MacCormick. After Quiet Sun, MacCormick joined his friend Robert Wyatt in Matching Mole, the latter fresh from leaving Soft Machine.

The influence of MacCormick's mate's seminal band can be heard in the music of Quiet Sun, especially in the tone of Jarrett's keyboards, and in their general jazz-based chops. What makes the difference is Manzanera's guitar, sometimes blazing a coruscating trail through the sky on tracks like Bargain Classics.

With tongues planted firmly in cheek, the album is called Mainstream, for it is a defiantly noncommercial beast. A mixture of jazz-rock, psychedelics and the unquantifiable otherness that any great album needs in order to stand the test time, the record kicks off with Sol Caliente, and the burning over-driven guitar figure is every bit as hot as the title suggests. MacCormick's Hopper-like fuzz bass launches the main theme and we're off! Through the quieter middle section Jarrett's keyboards paint a pastel picture behind which Manzanera's agitated guitar buzzes about looking for escape, which of course it eventually finds, bringing the song to a climax. A more than promising start.

Trumpets With Motherhood is a short keyboard based interlude with treated guitar. With Eno in the building it would have been daft not to use his talents on this record, but his input, while major on Diamond Head, is relatively unobtrusive here.

Structure arises out of the toy shop chaos of the initial percussion sequence of Bargain Classics, with another of those hypnotic keyboard figures Jarrett rolled out with aplomb. Dave Jarret turns in a really good performance on this album and in other circumstances could easily have ended up in playful rivalry to Dave Stewart and Alan Gowan. Bargain Classics is on a par with National Health or The Hatfields, it's that good. Making use of the three keyboard players the melody and counter melody weaves in and out of itself, with Manzanera's guitar also providing counterpoint. The rhythm section is intuitive with a lightness of touch that is just what is needed to compliment the front line.

R.F.D. slows things down and an electric piano via a Leslie speaker effect with synth flourishes provides a nice calming interlude. I've absolutely no idea what "R.F.D." stands for, by the way! Then comes the spectacular tune with possibly the best ever title in popular music, Mummy Was An Asteroid, Daddy Was A Small Non-Stick Kitchen Utensil. An aggressive and spiky little number where the guitar powers us along, we are left hanging on to that asteroid by the tips of our broken-nailed fingers. Definitely Phil's starring vehicle, the playing on this is about us un-Roxy as you can imagine, sounding like a learned older cousin of Khan-era Steve Hillage. Marvellous it is, makes you want to hit repeat as soon as it's over.

After the sudden ending of Mummy..., Trot slows the dynamic. An involving and confident keyboard led meander down a jazzy path, Jarrett again shows he was no slouch. Must be something in that surname! Waking us up from our reverie, the song ends with more stabbing guitar from an on fire Manzanera.

Another sudden ending and we're off into Soft Machine territory with album closer Rongwrong, but the band soon put their own stamp on that classic Canterbury sound. Written by drummer Hayward, who here sings the only vocal of the album where oddly enough he comes over like a cracked Robert Wyatt in the delivery. The clever lyric is possibly a tale of intellectual peer pressure and the ultimate need for companionship, and halfway through MacCormick delivers a fine accompanied bass solo that adds to the slightly introspective nature of the song. Sitting slightly apart from the rest of the album, Rongwrong shows where the band may have gone, given the chance.

For once the bonus tracks have some purpose as this is the only fully formed release by the band, but the purpose of this review is the main album, and it seems the CD version with the bonus tracks is increasingly hard to obtain. Suffice to say, if you can track it down it's definitely worth it.

Mainstream by Quiet Sun is thankfully no longer a "lost gem" as many still refer to it, and Quiet Sun were a missed opportunity for the music industry at the time and by 1972 they were no more. Thanks to Phil Manzanera's fame with Roxy Music, we have this fitting tribute to a highly talented bunch of musicians, and I for one will keep on going back to play it once more.

With:
Brian Eno - synthesizers, treatments and oblique strategies
Ian MacCormick - Back up voices
at December 25, 2013