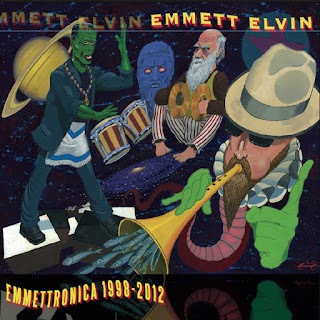 Following on from the artistic triumph that was last year's appropriately titled Bloody Marvels album, Emmett Elvin, keyboard and electronica wiz of this and all other parishes has re-released his eclectic compilation Emmettronica '98 - '05, that traces his imaginative and wide-ranging solo recordings all the way back to a time of hope, now with 13 extra tracks, being the first 13 of the download accounting for the extra seven years added to produce the 1998 - 2012 tag.

Emmet tinkles ivories, plastic or real, and does odd things with synthesisers for Guapo, Knifeworld, and Chrome Hoof, but here he is let loose to follow his own peculiar and individualistic muse to his heart's content, and we are privileged to be able to hear the results of Emmet's 14 years of messing about in studios.

Sparse Eno-esque electronica collides with alien Herbie Hancock funk, mangled techno beats, avant garde larking about, and an ear for a decent melody as the good spaceship Soyuz Elvin travels back and forth through time on a never-ending quest to seek out the unusual. Setting the scene with the eerie spacewalk of Cosmonautilus, we drift into the alt-jazz-techno of My Headless Tortoise and a veritable cornucopia of sounds and ideas is laid out before us on this highly entertaining rummage through Mr Elvin's musical attic.

The grubby hull of the speeding craft is scrubbed clean to the accompaniment of Burn & Shine, hurtling through the asteroid belt with furious glee, disembodied voices muttering with dark portent. Scatter-gun beats chatter while synths gabble on The Burnt Ocean, on Lunopolis classical keyboard arpeggios chime in quasi-religious incantation to unknown deities...and so we rise, so we ride.


The modern film-noir feel to Those Shirts is followed by Starbuck's End, where piano tensions rise and a rare and sharp guitar line cuts through as previously avoided dues are paid. The classical influences return on the Bach influenced Poor Zokko, and several rugs are cut by seven-limbed three-clawed aliens doing the Magellan Shuffle to Bugshutter. Like Philip Glass on speed, Electropipe charges along on a runaway rhythmic stream of consciousness, while the following blissful and appropriately titled Marshmellow gives the listener time to gather his or her thoughts.

Rare vocals swirl through Wayfarer as the metaphorical journey continues. This whole thing would be great to listen to on a long train journey as Europe endless speeds past the rain-flecked window. Dream reveries are cut short on the industrial Sturm und Drang of Andromeda Backwash, only to return with the haunting Last Sunrise On Earth. More Philip Glassisms pervade the gently bubbling Phantom Arboretum, and some lovely treated guitar follows on Secondary. The warm bath of bass on Soltair soothes our weary space traveller, returning from the first part of the album contemplating insignificance while stargazing. The album ends with the elegiac Fergetit, a short piece of anti-choral multi-tracked vocalising with the most minimal arrangement, and it is quite lovely.

While Emmettronica 1998 - 2012 is not as coherent and is more minimalistic than Bloody Marvels, as it is a collection of snapshots of a mad professor at work in his evil sound laboratory rather than a planned album, it is definitely well worth your time, especially as it is only £5 (or £10 for the double CD) for an hour and a third's worth of intriguing, beguiling, and in places quite bonkers music!

Line up:
All instruments by Emmett Elvin, except where noted below:-Dr Matthew Day – “for his contribution to Mattmath“.Mr Henry Platt – Jen Synthesiser on Lunopolis.David Wright – Sliced, diced and reconstituted tenor saxophone on My Headless Tortoise.Duncan Western – Sliced, diced and reconstituted drums on My Headless Tortoise.Ms Miranda Barber – Sampled voice on more than one track, principally on Fergetit.

Double CD version available from The Merch Desk
at August 30, 2015