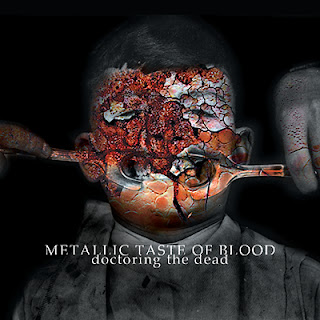 With a name as redolent as Metallic Taste Of Blood, in addtion to the gruesome cover of their second album Doctoring The Dead, it is indeed a surprise that the music this multi-national trio make does not make one feel queasy, but rather conjures an atramentous and shifting sonic ague that draws in the listener, whether they are willing or not. While metallic, this music is not metal, prog or otherwise, for it transcends genre description.

Doctoring The Dead inhabits the outer reaches of a similar universe to Mike Patton's gloriously visceral Fantômas and their literally and metaphorically bloody great Delìrium Còrdia album, but while Fantômas is cackling to its collective self and getting deep down into the process of the operation without anaesthetic, Metallic Taste Of Blood are merely observing through a two-way mirror, later to dissect the corpse of Fantômas's bloody offerings.

Not as obviously demonic as Patton's wilfully strange band, but nonetheless as dark as a bottomless pit, Metallic Taste Of Blood meld the disparate influences of their members to produce a throbbing mass of sound that will reverberate through your headphones or floorboards and shake your very core. Colin Edwin I'm sure you know all about, and drummer Ted Parsons has hit things for the mighty Swans, Prong, and Killing Joke to name but three strikingly feral bands on his CV. Let's just say that Colin Edwin's bass is monstrous, a gentle giant intermittently roused to fearsome growls, in tandem with Ted Parsons' drumming that shifts from a deft lightness of touch to a  Bonham-like insistent rhythmic brutality that not so much propels, but forges the music, a sixteen-ton lump hammer shaping the molten core on an anvil of sound.

Opening track Ipsissimus is about as upbeat at gets, a mid-paced beast lurching along, bouncing off the walls, with great work from the rhythm section and a cheeky Fripp-like "guitar as wonky piano" interjection from band leader, Italian guitarist and sonic manipulator Eraldo Bernocchi. Eraldo is a man of many talents who can lend proceedings anything from a dark ambient howl to some huge post-rock riffery as and when appropriate. Early PiL come to mind in the way Colin's dub bass and Ted's snare drumming enmesh on Pashupati, with Eraldo supplying blissful glissando above the wall-shaking bottom end.

The spooky and evocative title track is an eerie swirling mist of a thing, where Eraldo is joined by Roy Powell, a keyboard player of some repute at the more obscure end of the telescope. Powell adds layers of Gothic strangeitude to the track Doctoring The Dead that make for an unsettling yet oddly trance-like listening experience.

The wonderfully verbose but erudite press release claims that "listening to this will lift you into a state not unlike that of cognitive dissonance, one of deep, uncomfortable enjoyment" - it's not wrong.