Census of Hallucinations - Nothing Is As It Seems 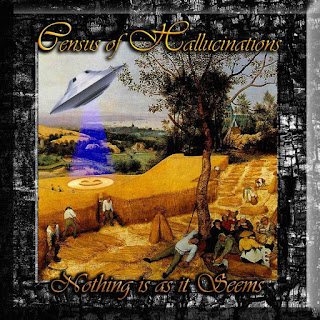 Since reactivating his marvellous troupe of fried agitproppers in 2012 with the rather fine Dragonian Days album, Tim Jones has led his Census of Hallucination troops into a period of high studio activity, resulting in no less than five albums, and a double album career-spanning retrospective to date. Nothing Is As It Seems consists of the quartet of songs that made up 2014's Imagine John Lennon EP, plus five new songs, all linked by a loose theme based around alienation in the modern world, a place that is essentially a prison for our thoughts, a place where freedom for the 1% is a given, but far from reality for the rest of us, many of whom are complicit, having "left their brains at home". Those in power will have us "Emptying the Atlantic with a cup, emptying the Pacific with a spoon", and we'll be bloody grateful, doff yer titfer.

Where was I? Oh yeah...I am well aware how this "woe is me" theme is all too prevalent these days, reflecting the sad times we live in, but in the hands of a skilled wordsmith like Tim the subject becomes far more than the wearily mournful shoe gazing you will find in most other lyrical themes that tread this well-trodden path.

"Dread locks you in" intones Tim in his very 'umble Dickensian semi-spoken tones on the ballroom-friendly title track, just one small example of Mr Jones's way with words. The quite fittingly loopy video below illuminates the abstractions of Elephant, Elephant, Elephant where Tim digs deep into his river of consciousness and comes up smiling with...


If there's a hedgehog in your bus lane,
Don't be worried,
It's just looking for the Mayfly,
There's a feeling I get as I walk down the steps,
That this just might not lead to heaven,

...and that is just the start of a long trip into Tim's altered state thought processes. You'll get the gist by the end unless you're daft!


He can also rant with the best of them, as the whole spoken lyric to Nautilus shows...here's a little snippet:


Eradicating the addiction to being stuck,
Survival mode through the struggle,
Taking responsibility for our own thoughts,
Become that for which you pray,
Or go back to sleep,
Cognitive dissonance is the enemy

As is only right and proper, all the lyrics to this fine slab of penmanship can be found on the band's website (link down there somewhere).

Musically, Census Of Hallucinations play out a mostly fairly minimalistic but nonetheless full sound, often given a dreamy vibe via Maxine Marten's and Terri B's backing vocals. Proceedings are occasionally enlivened by the flowing acid lead guitar of one John Simms, a name some of you may recognise. Yes, this is the same John Simms who was once the mere 18-year old prodigious guitar wrangler behind the semi-mythical Clear Blue Sky. Their gloriously primal self-titled album from 1970 cries out for a full-treatment reissue...Esoteric Recordings, are you reading?

John Simms'  largely plays with washes of colour, his subtle echo-drenched interjections mostly lurking quite low in the the floating trip of a mix, occasionally bursting out with a liquid flurry of notes, as in evidence towards the end of Faculty Of Mirrors, all quite peachy!

There is a distinct whiff of Gong in these grooves, but where that band, not so much latter-day admittedly, but certainly in earlier incarnations at least were sometimes well away with the faeries, the twinkle-toed winged elfin creatures inhabiting Censusworld wear boots, goddamn, and they are grounded very much in the here and now. The wistful space-ballad He Who Can Manage Camels is full of lyrics starkly reminding us of the place of us mere plebs in the grand scheme of things, and where it could meander off with a sigh and into a hippy reverie in an air laden with thick bong smoke, reality bites back:


It's not Shiva or Buddah or Zoroastra,
That's gonna solve your problems mate,
It's in the here and now,
In the know how,
Of why we're here

I hope my inadequate scribbling has piqued your interest in this album, and the weird and wonderful world of Census of Hallucinations. If you like what you hear, try the career-spanning compilation A Bundle Of Perceptions/A Parliament Of Modules for a very varied and trippy overview of the lifetime of this fine bunch of Kosmische travellers.