The Fall - Last Night At The Palais 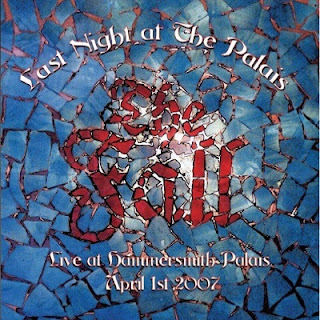 Is there anyone in the world who owns every Fall album? I somehow doubt it. If there is, they probably need a shrink. I've got 307 of the buggers bowing out a shelf, but there are at least another 158 I have never heard, and that's just fine. The Fall are a band, nay an institution (madhouse?) one can dip into and out of at will. They seem to have always been there, and they will only stop when Mark E. Smith slumps over his last pint, never to curmudge again.

There is no reason to buy this 2009 released album for the soundtrack alone, unless you were there. No, the real strange attraction of this set is the DVD, documenting the last ever gig at that famous old venue the Hammersmith Palais, on April 1st, 2007. The last crowd of white men (and a few women) in "'ammer-palay", as Joe once immortalised it were to be moved on, they don't want your type here no more, make way for the never-ending encroachment (Yarbles!) of gentrification.


"Northern white crap that talks back"

Mark E. Smith, national treasure and icon of angry middle aged working class blokes up and down the land sat alone in dreary sink estate pubs nursing their 12th pint of cheap weak lager, not that they would know who he is anyway, leaves it four minutes after his band have started before he shambles on to the stage at the soon to be defunct Hammersmith Palais, located in "your so-called capital-ah". During this time the band belt out the mantra "Senior twilight stock replacer" over and over with manic enthusiasm to a furious backing, no doubt brought on by paranoia at the prospect of being intimdated at worst, or having their amp settings buggered up by their curmudgeonly old soak of a boss at best. They can't get away with owt, as Smith's wife is there with them as they thunder along...who knows, does she spy? Paranoia in cheap shit room, indeedy.


Fall Sound has maintained its shambolic origins, and now covers up musical deficiencies with a sledgehammer relentless beat. Musically, the star of this show, the last in this famous old venue before it was no doubt turned into a block of apartments priced way out of reach of normal Londoners, is the twin-bass attack of Rob Barbato and Dave Spurr, whose churning rumble threatens to make the waiting wrecking crew redundant before the gentrification rebuild has even started. Determinedly amateur, Mrs Smith aka Elena Poulou's childlike keyboard playing slaps a layer of strangely sinister naivety over proceedings, recalling Yvonne Pawlett on that very first album, released almost 38 years ago. There are no laptops in evidence, natch.


"Repetition in the music, and we're never gonna lose it"

Repetition is at the centre of The Fall's sonic template, taking its cues from classic Krautrock. Klaus Dinger sounds comparatively subtle in comparison, for here the motorik rhythms are flattened out by jackhammers. The pace is even, but relentless, building up to a crescendo with the superbly and dangerously hypnotic Blindness.

A vast number of albums have spilled their invective over a pavement (heheh) near you since 1979's Live At The Witch Trials, but MES is notoriously wary of nostalgia, so checking out his track record in a live environment is a definite no-no. Of the 12 numbers on this album, five come from the then latest album Reformation Post TLC, and of the rest, only Wrong Place, Right Time can be claimed to be an oldie in any true sense of the word, coming from 1988's I Am Kurious Oranj - my favourite Fall album, for what it's worth.


"How dare you assume I wanna parlez-vous with you"

It's OK Mark, I have no desire to meet you, as you are certainly of the "hero not to be met" subset. I'll bet your taste in beer is quite poor, too.


With his twisted verbosity, MES can make what at first listen might even be a love song - heaven forfend - turn into something quite nasty. "My door is always open to you" slurs Smith incessantly on My Door Is Never but beware, for "...my spectre is coming after you, I crave your death within my mind's eye".

Stranger than MES is is his wife's monotone East European intonation of the above line and other bizarre cut up lyrics contained within a charging version of The Wright Stuff, which like everything else here pummels the studio version into submission.

The band veer between being tight as a nut to the point where the whole thing nearly collapses during a shambolic take on rockabilly standard White Lightning, with one of the guitars being woefully out of tune, but hey, that's all part of their charm. Prog rock this ain't! That was the more conventional of the two covers in the set, a thing for which MES has a keen ear. The other is Zappa's Mother's tune Hungry Freaks, Daddy...no, really!

As legend has it the previous version of this band were goaded by MES into mass resigantion after an incident on a tour bus where our Chief Grouch allegedly poured a full pint of beer over their coach driver's head while said busman was piling along a freeway at 70mph. That 208th line up of the band left us with an album appropriately titled Fall Heads Roll, incidentally the last Fall album I bought. Contained therein is a  Fall anthem to rank up there with the finest, and here it is in all its nine-minutes of Krautrock via Salford-unter-blitzkreig glory...

Bearded bass player Rob Barbato, who for most the gig seems to be glancing nervously at his Glorious Leader, perhaps expecting some kind of censure for being ill-advisedly facially hirsute-ah, finally relaxes and beams like a kid when Smith gets playful and almost ruffles his beard during this final number. Smith later gives his microphone to the crowd, who ironically enough, rant into it unintelligibly, while the Glorious Leader messes about with his wife's synth. What a glorious racket this Northern misanthrope and his charges make. I can quite understand if you hate it, and so could MES. We wouldn't have it any other way!


Line up:
Mr & Mrs Smith, and some other blokes, some of whom you may know personally. After all there is now only three degrees of separation between The Fall and everyone in the UK. Four, if you live elsewhere!

Fansite - with all the lyrics - you don't imagine I can actually understand what MES is mithering about, do you?
at January 23, 2016