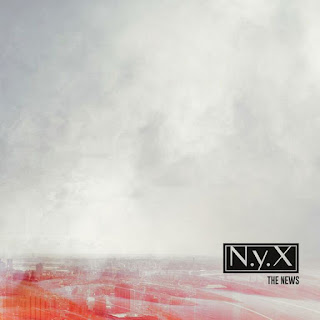 Italian eclectic prog outfit N.y.X will rattle your jewellery and shake the dust off your ornaments with this splendid sprawling beast of an album, their second following on from their agitated debut, 2009's Down In The Shadows. Once again they have called on a stellar supporting cast to flesh out their already turbulent sound. Their sonic cup brims over, indeed!

As you may correctly surmise from the album and track titles, The News is a conceptual collection of songs transmitted via a fiery musical discourse, dissecting the everyday stresses of 21st century survival amid an unending stream of establishment control and media mainpulation. While a hardly unique premise, especially within the modern Progwelt, The News transmits edgy nervousness and twitchy paranoia with aplomb, both lyrically and musically. Groundhog Day... will intentionally set your teeth on edge before descending into exhausted calm in the denoument.

N.y.X display an obvious love of Crimsoid weirdness, a tune like A Sarcastic Portrait... ascending a particularly fine construction of light, but they soon leave those influences behind as their own unique brand of propulsive energy drives the pulsebeat ever onward. Indeed, A Sarcastic Portrait... eventually ends up in an entirely different universe to turn of the century Crim, that influence no doubt being more than a little down to the presence of former Crim front man Adrian Belew on guitar. He's fairly unobtrusive in the busy mix, but you can recognise that psychotic elephantine plank spanking anywhere, and one particularly fine assymetrical solo will have your kneecaps facing in opposite directions should you attempt to shimmy to it. This after all, music you can really only dance to in your head.

Discord (Domestic Policies) takes a deserved breather, whisking the sound away into a psychedelic swirl of soaring guitars and early Floydian spaciousness, with the languid cosmic vibe recalling British space explorers Census of Hallucinations. N.y.X appear to be sonic cousins of their similarly lysergically inclined countrymen Daal, and if anything are even more out on a limb. It's a fine and shapely looking peg, so I'll stay here if I may, musing on the alluring stocking seam enticingly disappearing into a mysterious but inviting dark warm world.

The sound mix, by band leader and chief writer Walt F. Nyx and his bandmate Danilo A. Pannico is superlative, and you can turn it up without fearing for your sanity or indeed your ears, as thankfully it now seems that the loudness wars are a thing of the past. The "quiet but loud" of the latter half of The Paper and the percussive detail of Oscillations... being fine examples of the warm and involving sonics.

If The News has one slight failing it is that the manic energy of the first half of the album cannot be maintained, and the latter half while still generating enough power to light my shed for a week does not quite hit those earlier giddy heights. The pacing of the album was no doubt intentional, and after repeated listens it all falls into place, so it seems I am looking for cracks in the pavement where there are none - the critic's curse, I guess.

Despite having an electronic opening ryhthm that reminds me of mid-80s synth pop, The Daily Dark Delirium soon wins me over by going Crimsoid again, this time courtesy of Warr Guitar supremo Trey Gunn. The song jumps around like an over excited puppy, and for me recalls early VdGG in its manic intensity, which is enough to get me past the slightly "sixth form poetry" declamations of the lyrics. I can forgive that as Mr Nyx is writing in a second language. And here we end, quite breathless and none the wiser as to where this unique band are coming from or indeed, going. That is a good thing.

Occasionally Bad Elephant Records pull a really odd looking rabbit out of the hat, and thus far this year the Bad Elephant Unseemly Carrot Award definitely goes to N.y.X, and The News is a must for any lover of the quirky end of the prog telescope, or of avant rock in general.

Footnote: With a website that seems to be a dead link and with no YouTube videos, this band seem to like hiding in the dark. The News is all there on the Bandcamp link above, thankfully!
at February 28, 2016