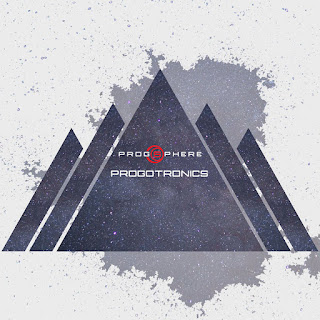 It is thanks to Nikola Savić of Prog Sphere Promotions that six or seven years ago my ceaseless witterings about music no-one listens to got a wider audience, for it was via his site that my reviews first found an outlet beyond my then near-invisible blog, customer reviews on Amazon, and occasional contributions to Prog Archives.

Over the years Prog Sphere Promotions has released many compilations featuring bands from all over the world, covering all the countless musical tributaries that feed into this thing we call Prog. The quality of the participants in these Progstravaganzas, as they were known, varied wildly and much fun was had over at DPRP reviewing these unruly monsters as part of a small team of scribblers.

Gradually, Prog Sphere and I parted ways, as I found new outlets for my incessant ramblings, and Prog Sphere disappeared below the horizon, no doubt due to the intervention of the real world into the life of its founder, following his nuptials.

In recent months, Prog Sphere has started to re-appear in my newsfeed, and now comes Progotronics, the first Prog Sphere compilation in quite a while.

I was looking forward to revisiting a track-by-track review full of pithy one or two-liners, but unfortunately, as this compilation is almost exclusively populated by the bludgeon riffola of tired cliché-ridden prog metal, that would be a pointless exercise of repetition. Much like the compilation, in fact! Prog metal still seems to revel in recycling the same old tired formula until the cows run home, their ears bleeding, demanding it stop now, or send us to the abbatoir post haste.

It takes until track 5, Ressurgence (sic) by Burnt City before anything makes enough impression not to have me reaching for the skip button. To be fair to all the artists here, I did actually listen to every second of this sheet-metal grey slab of conformity, not an experience I wish to repeat in a hurry.

The Crawling Chaos by Increate is of passing interest from a technical standpoint, and at least it is not blighted by grunting, or the other favourite which seems to be an angelic warble from a female singer. To be fair most of this compilation is instrumental, with only one or two examples of grunting. Listen to Koronal's Usurper and tell me what the point is of singing an entire song like you've had your larynx replaced by an aircon outlet pipe. I can imagine when grunting first appeared in a metal album it was a "wow" moment, but now it's just annoying, and somehow comically juvenile to boot.

A welcome break from the prog metal comes with Echo Of Your Voice by Konstant Singularity, the first half of which has a slow Mahavishnu vibe going on - heck there's even a jazzy bass break in the middle! Of course, they have to change tack to a Sabs sludge riff halfway through, which is fine actually, as this is by far the best track on the album so far, which admittedly is not saying a lot. Pretty soon we're back to the "look how fast I can play" school of rawk. Dream bloody Theater have a lot to answer for. Later another break from the metal comes with Aeonic Impulse and Existing Within The REM. There's a joke there...but I can't be bothered. Vaguely spacerock, and a singer who can't doesn't stop me enjoying this as the dynamic is so different from that which surrounds it. Thankfully the vocals are later taken over by someone who can sing, and inevitably the "REM" part involves a heavy nightmare, maan, but even the Animal-like drummer isn't going to put me off. An island of sulphurous mists in a sea of battery acid.

Nowadays it is so easy to record and release music via cheap recording software and the web, that the rising tide of aural sludge, be it prog, country, pop, metal or whatever makes it increasingly difficult to spot real talent as it struggles for air above the tsunami of the average. Forty years ago very little of this would have seen the light of day, and stayed in its drummer's dad's garage, where it belongs.

I have no idea how much Nikola Savić has to do with Prog Sphere Promotions these days, but as his first love was always metal music in all its myriad forms, I suspect he has more than a hand in this. To truly live up to the Sphere part of their name, the next compilation, if there is one should really be all-inclusive, like the old days. Progotronics is far too prog metal obsessed for me, and I can't say any of this is progressive in the true sense. If you like your metal you might find something to like here, otherwise avoid! At least Prog Sphere Promotions don't expect you to pay for it, which is something, I suppose.