All Them Witches - Sleeping Through The War 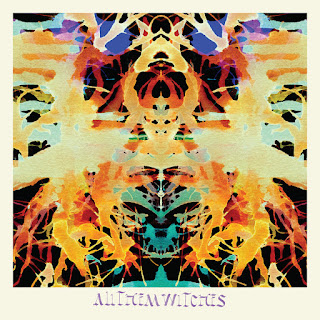 All Them Witches are purveyors of desert rock, for want of a better term, but that's a way too limiting a description for this classic album that combines many strands to weave a dazzling day-glo fabric of mind warping rock'n'roll. Formed as recently as 2012, Sleeping Through The War is already the band's fourth album, they don't hang around. Despite looking incredibly young in their promotional photos, they are imbued with the wisdom of justified and ancient ur-rock, chanelling Blue Cheer, Hendrix, The Stooges, right through to Nirvana and Queens Of The Stone Age.

They were a name unknown to me until a few weeks ago when one of those rambling online music-related conversations I've been having of late with my American mate and fellow scribbler Shawn Dudley, a man who likes his rock to be heavy and righteous, mentioned this band. Connections were made and Shawn has now penned a review of the Nashville stoners' latest waxing Sleeping Through The War for The Progressive Aspect that probably tells you all you need to know, and his glorious phrase "ferociously stoned" is entirely appropriate when applied to this mantle-deep rock of an album. That I am now writing this on my blog as an "Addendum (Immaculately Wasted)"  should indicate how highly I rate this beguiling record, shot through as it is with a deep mystery of the kind that could only be conjured up in that vast cauldron of hope, fear, expectation, and unbridled ambition that is America. This is a stoner romance spread over a eight tracks seemingly arranged for vinyl, with the fast punchy stuff up front and the stretched out smokin' music sprawled across "side two". That will be why I bought it on that most aesthetically pleasing of formats, then.

As much as anything has the time to be chez moi these days, Sleeping Through The War has slowly risen to heavy rotation status. It was not an instant album, it is possessed of a slow, heavy groove courtesy of maverick country producer Dave Cobb that takes time to get in deep, but once in there, it ain't shifting. This is the romance of big skies and far horizons, the mystery of native magick, dust devils swirling in its wake. I wanted a tag line for this review, and that line from the furiously louche Don't Bring Me Coffee I used, drawled somewhere between stoned and threatening, fits like a glove.

A dreamy lull into false security is offered by the beginning of opening track Bulls, but when that lysergic sludge-riff kicks in, dragged all the way up from a time-buried Stoogian hell, you will be jumping around the room like a rhino taking ballet lessons. That the track later morphs into some kinda Krautrock freakout ending, like Damo had been fronting Nirvana seems somehow completely logical.


Don't Bring Me Coffee ups the ante some more, and that rhino will be destroying furniture. Many other opportunities to frug are offered on "side one", but Sleeping Through The War gets interesting when it stretches out, and "side two" is for the most part a surreal take on where the rock is buried now in deepest Murica. "Am I going up? Am I going down? Am I going nowehere?" asks the splendidly named singer/bassist Charles Michael Parks Jr. on the deep blooze of Am I Going Up? You have to roll, and roll some more before you and Charles with his strung out drawl come to the conclusion "If I can't live here, guess I'll go live on the internet" before howling the winds made moan via some gloriously sleazy harmonica. Yee, and indeed, Haw! Guess I'll Go Live On The Internet wends its lazy way through the swamp and out to the sea for nearly ten minutes in a retro-futurist languid bluesy space walk, chanelling Nick Cave, Dr John, and The Allman Brothers. Luvvly.


Before you get there you have to drag yourself away from the hypnotic voodoo call of Alabaster, a deeply impressionistic tale, pulling on the call of hearth and home, longed for escape and the coming days of reckoning. This song is six minutes and fifty eight seconds long, or maybe it is endless. "Every day they look more and more like me" sighs Charles as everything comes full circle.

As I was new to this band I gave myself a crash course in their previous albums, and it has become fairly obvious that Sleeping Through The War is a summation of everything that went before it, serving up a gumbo stew of Americana, rock'n'roll, country, ancient grungy primordial riffage that can be traced way back to the Stooges, and a large helping of dem blooze, all shaken and stirred with no little amount of psychotropic influence. It is fucking great! All Them Witches appear to have scaled a summit, and are gazing heavy-lidded into the hazy distance. It will be mighty interesting to see where they go from here.