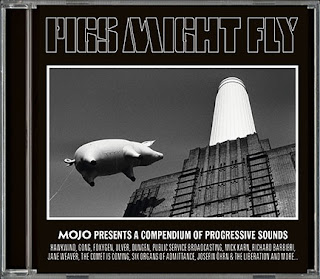 With a sub-title of "MOJO Presents A Compendium of Progressive Sounds", how could I resist a deeper look into the latest cover-mount CD from probably the best mainstream music magazine here in the UK? Ostensibly compiling tracks that MOJO claim are inspired by the progressive spirit of Pink Floyd's Animals album, a mere 40-years old this year, the cover note rightly makes the distinction between "progressive" and the sometimes pejorative
term "prog".


Public Service Broadcasting - The Other Side
Last year's flavour of several months, the prog PSB never quite resonated with me. While individual tracks work well enough, like this pleasant synth melody underneath the soundtrack of Mission Control and Apollo 8 losing communication and then regaining it, as that first manned flight around the Moon disappears round the dark side and then re-emerges, the album as a whole may prove to have a very short gimmick-laden shelf life.

Hawkwind - Lost In Science
2016's The Machine Stops saw a return to form for the veteran space travellers, and this concluding track from that album regales us with one of those instantly recognisable Dave Brock riffs, and plentiful strangeitude.

Gong - Through Restless Seas I Come
Following founder Daevid Allen's death, Gong have gamely carried on with the the tousle-haired Kavus Torabi, aka The Hardest Working Man In Showbiz taking the reins. Having joined while the chief Pixie was still working with the band, Kavus has given the group a new direction and lease of life, as this song from the defiantly celebratory Rejoice! I'm Dead shows, while retaining the inescapable Planet Gong sound.


Six Organs Of Admittance - Adoration Song
Unusually for a MOJO CD, it is not until this fourth track that I come across a band I'd never heard before. The spookily named Six Organs Of Admittance only partly fulfills that description, as guitarist Ben Chasny is also the plank spanker for the wonderfully incendiary Comets on Fire. Adoration Song is a delicate country-psych confection, all winsome vocals and slow, echoing guitar. Rather nice!

Dungen - Jakten Genom Skogen
Taken from the Swedish nu-psych masters' wonderful instrumental album Häxan, written as a new soundtrack to the world's oldest surviving animated film, this tune rolls along with a languid easy confidence. More words will be written over at TPA in the near future.

Jane Weaver - Modern Kosmology
The first truly new name to me on this sampler, Jane Weaver, who has apparently sampled "everyone from Hawkwind to Cybotron" here sings a modern psychedelicised waltz tune that employs subtle motorik rhythm under a repetitive keyboard motif. Simple but effective.

Josefin Öhrn + The Liberation - Sister Green Eyes
Another new name to me. Way more influenced by Syd's Floyd than the later Waters' version of Animals, Sister Green Eyes has set the controls for the heart of the sun with some panache, producing a laid-back hypnotic groove in the process.


Mick Karn - Ashamed To Be A Part Of Them
The unmistakable elastic sound of Mick Karn's fretless bass places this elegant and stately outing from his final solo album released in 2009 firmly in the court of the band whose sound he had the major part in crafting more than 25 years previously.

Ulver - 1969
One of the few bands on here who can genuinely be called progressive, this track from the Norwegian's soon come new album, enticingly described as "pop" by leader Krystoffer Rygg, archly reflects on the fact that nothing seems to have changed since the year of the title. Sounds like Depeche Mode in a dreamscape, fronted by Neil Tennant. Always expect the unexpected with this group!

Foxygen - Rise Up
A group I have never got a handle on. It's grandiloquent pop I suppose, and the band's new album apparently features orchestrations and "progressive intent" according to the blurb. Sounds intriguing with a nice wonky guitar break at the end, but my jury is still out...

The Phoenix Foundation - Silent Orb
The next new one on me, this New Zealand band deal in off-kilter pop in unobvious time signatures with grand choral arrangements, if this tune is anything to go by. Interesting...

The Comet Is Coming - Final Eclipse
With an apocalyptic name and song title, this should be a fabulous and mighty racket, howling into the oncoming firestorm. It's actually a wonky dance tune led by a squelchy sequencer melody and groovy sax playing, but oddly, I am not disappointed. Their sax player is called King Shabaka, which should be good enough for anybody. More progressive than a lot on here, for sure.


Julie's Haircut - Salting Traces
Another fabulous band name - proggies, are you watching? - and yet another new one to this old fogie, Julie's Haircut is an Italian psychedelic band that started as far back as 1994. Unsettling rumbling electronica leads to a bowl cut and pupils as big as the sun.

Richard Barbieri - Solar Sea
A track from the ex-Japan and Porcupine Tree keyboard wizard's utterly lovely new album. I have written more than enough about this fine recording over at TPA, so I won't repeat myself here. Make sure you see the 360° video for this track!

Orchestra Of Spheres - Cluster
We finish with an acid-fried slowly building evil shamanic funk spectacular, featuring a fabulous but sadly all too brief guitar wigout to end. Their album Brothers And Sisters Of The Black Lagoon may well be worth checking out if this is anything to go by.
...

Well, there you have it. If asked, I doubt that very few, if any of these bands would state Floyd's Animals as an inspiration to their tracks represented here. The link is tenuous to the point of non-existent. Also how much of this album is actually progressive is moot, but even so, this is by far the best MOJO cover CD for many months. Keep tokin' Mr MOJO!
at March 26, 2017