A bit of serendipity by Phil W led to this wonderful gig. Taking a coffee at a café in Shoesville with his good lady the previous Friday Phil noticed an advert for this gig in a newspaper someone had left on their table. As this is a band that Phil & I had been wanting to see for years, but doubting if we would ever get the chance, this was a must and diaries simply had to be hastily rearranged. Telephoning the venue not unreasonably expecting to be told that the gig was sold out, Phil was surprised and delighted to be told that there were indeed tickets available, which were duly snapped up. It seems tales on the news of London entertainment venues suffering during the Olympics were correct, luckily for us! The gig was part of a week long John Etheridge residency at the club, the respected guitarist showcasing his wide range of fretboard abilities, playing as part of an acoustic combo, as leader of the Zappatistas, and as part of duos with singer/pianist Liane Carroll and pianist John Holder, as well as this one, with Soft Machine Legacy.

After a quick hour-long train ride down to the capital on a pleasantly warm, and for once, dry Tuesday afternoon, we ventured across town to the pre-gig entertainment which consisted of a visit to Somerset House, home to an exhibition of photography celebrating 50 years of The Rolling Stones, very good it was too, and, amazingly, free to enter!

Next up was a scrumptious meal in Chinatown, and then onward to Soho and eventually downward into the cellar that is the PizzaExpress Jazz Café. Any venue that boasts a corporate sponsor as part of its name always fills me with a little dread, as big business and art do not make natural bedfellows, but as I later discovered this now global chain has supported jazz at its intimate Dean Street venue since 1969, my worries were completely unfounded. 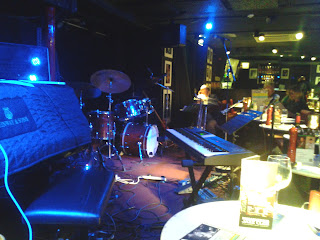 We were led to our table to the left-hand side and next to the small stage which was crammed with wires and sundry boxes of electronic gadgetry. You can see from the picture that we would be "up close and personal", the only drawbacks being our proximity to John Etheridge's guitar monitor which meant a slightly unbalanced sound, and a view of John's back was sometimes the central visual focus.

These small niggles were more than compensated for by some blistering playing by the highly experienced ensemble. Drummer John Marshall and bassist Roy Babbington, now both the other side of 70 kept things flowing with a dexterity belying their age. John's drum solo after the cacophonous The Relegation Of Pluto, a tune from Theo Travis's Double Talk album, was a jazz percussionists dream, subtlety and power flowing seemingly effortlessly from his wrists. 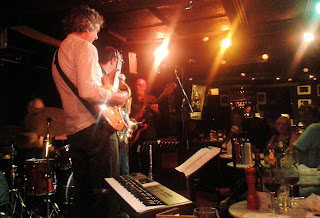 Opening the set with two tracks from their 2007 album Steam, a powerful rendering of The Steamer followed by an uptight'n'funky In The Back Room set the scene for a great evening's entertainment. It wasn't too long before one of my favourite later-period Soft Machine songs The Nodder was given a suitably atmospheric reading, and the first half of the set was later brought to a close with a storming version of Grapehound, Theo Travis putting his own stamp on Elton Dean's sax parts. Theo played a blinder throughout, but the undoubted star of the show is John Etheridge and his fluid soloing, Grapehound being a perfect example, especially where the solo is replaced by a cyclical riff in some strange time signature that was both powerful and hypnotic. You could not fail to be impressed! 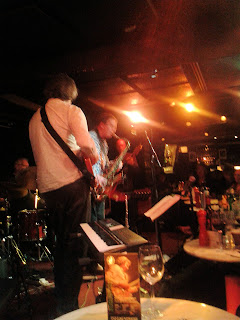 John was also an engaging front-man, one snippet of his early life on the road with Stephane Grappelli in the Deep South of the USA being particularly amusing. I won't repeat it here in case you're going to see Mr Etheridge any time soon, tease that I am.

The second part of the evening also starred Theo's live debut on a piano on Black and Crimson (I think), playing a distinctly Steven Wilson-like chord sequence, if my ears did not deceive me. The set ended on a rocking version of John E's Pump Room, before the obligatory encore, this time a spacious and funky rendering of Gesolreut, a song now almost 40 years old, not that you'd know it.

Sometimes the best gigs are those attended at short notice, and this was definitely one of those. A storming night - thanks for having that coffee, Phil W! 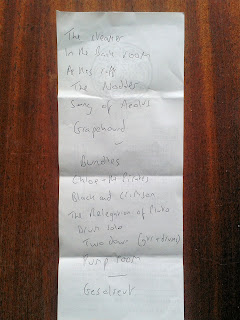 To your left is the setlist (click on it to enlarge), scribbled on the back of a bar tab for me by Theo, who, along with the rest of the band stayed behind to chat, and who also revealed that the next SML album is in the can for a release later in the year. So much for my companion and I fearing that this may be last we will see of the band, given their infrequent live appearances and their age - Theo apart of course, who was jokingly introduced by John E from the stage earlier as a "young man"! Keep on keepin' on, lads!