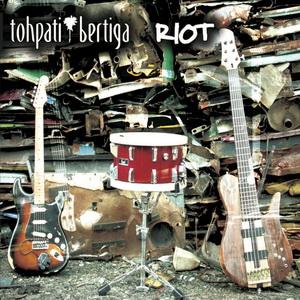 Since discovering the quite wonderful guitar playing of Tohpati Ario Hutomo early last year via his Indonesian ethno-jazz fusion combo simakDialog, I've kept a close watch for new product, so I was more than eager when MoonJune announced the release of this album.

In contrast to simakDialog this is a much heavier record where Tohpati lets rip in all manner of styles, fusing the influences of Holdsworth, McLaughlin, Beck and a host of other stellar names to create his own inimitable and peerless sound.

Riot is rightly described in the press release as "a power-trio session with his group Bertiga" and ably assisting the main man are bassist Indro Hardjodikoro and drummer Aditya Wibowo (unsurprisingly aka "Bowie"). Trading punches like three twinkle-toed lightweights on speed the three of them bounce off the walls on opener Upload, and there is no looking back. Careering along at a fair old lick, the odd time signature of this tune leaves me breathless and dizzy. Upload is metal-jazz fusion of the highest order, believe me. The middle section even has a kind of twisted sub-Sabbath bass line over which Tohpati shoots off way beyond the pull of gravity.

Some fusion of this type can be mere arid displays of techno-flash, but this is a satisfying and wholesome meal with bags of soul. Recorded live in a small studio in Jakarta, intervals between the songs are occasionally snippets of laughter or conversations, showing that this band are having fun, again something not always associated with the sometimes too serious world of jazz-fusion. I Feel Great is self-explanatory and after the battering of the opening track is a welcome breather for the listener as casual funk flows from the instruments of our three players. You can almost see the bass player strutting as he leads the band, on the one, of course!

Having served his apprenticeship as a session man backing various Indonesian pop stars over the years, in a parallel fashion to Jimmy Page, Tohpati certainly knows his chops, but his playing shows a depth of feeling as well as heaps of technical ability. The title track for instance uses some very odd time scales, but in a way that is not at all clinical, and the following song Middle East uses a recurring pattern that might seem more obvious on first listen but becomes ever more intricate the more attention you pay to it. On this song the drummer cleverly juxtaposes the fluid runs of the guitar and bass with minimalistic snare and cymbal. Another great lesson in "less is more" that I'm sure any tub thumpers amongst you would appreciate. This man knows where the hole is, but knows when to leave it uncovered.

Here's the band in action with Pay Attention:

Amongst many other highlights are spotting the references on the tongue-in-cheek Rock Camp, which shows Tohpati can play it straight...kind of...when he wants to. You can almost see him grinning his way through this song. See how many tributes you can spot! Absurd seems to have several time signatures going on at the same time, and features some crazy call and response between the guitar and bass that seems chaotic but never falls apart.

The carefree and fun nature of the record shines through in the twists and turns of Disco Robot, and then we get to what for me is the high point of the album, the stellar exploration of Lost In Space, a languid and seeming casual trip through the cosmos that encapsulates the sheer vastness of the heavens with a subtlety that is quite delightful. To think that this is the same band that gave us the math-shredding of Upload earlier on is quite something.

The album ends with the tightasthis syncopation and guitar-as-treated piano-synth Frippian oddities of Bertiga, and 60 minutes have flown by. Only one thing to do now and that's hit the repeat button.

If you only listen to one non-Western plank spanker this year, you could do far worse than buy this fab album....or maybe Ligro...damn, there's some hot stuff coming out of Indonesia, and I ain't just talking about the food!