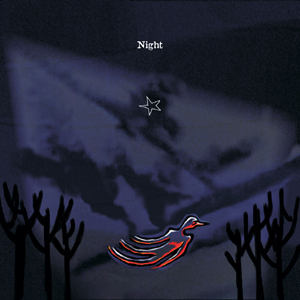 The excuse I have for reviewing this 5-year old album now is that it has just been reissued by kscope with slightly tinkered sound and a bonus CD of live tracks. A pretty lame excuse, but this record needs to be given as much publicity as possible, as it is simply too good to be ignored.

Night is ostensibly a 53-minute long five-song suite in G linked by a simple violin refrain, but in reality it is much much more than that.

Musing on the real and imagined memories of a character or characters as they flit in and out of a dream-like state, viewing the world from many perspectives may sound like an ultimate prog concept, and it probably is; assuming of course I've nailed the subject matter correctly!

Shutting themselves away from the outside world, the guitarist, keyboardist, and violinist and the singer emerged blinking into the almost-daylight with a beguiling song cycle that has stood the test of time...well 5 years at any rate...and is now my favourite album by the band, displacing even the wondrous March Of Ghosts from earlier this year that was, I'm ashamed to say, my entry point to the Norwegian band's epic sonic template. Having had versions of some of the songs from Night to listen to on the London live album, acquired at the same time as March Of Ghosts, I now have the real thing spinning in my CD player, and not a moment too soon.

This new version of Night features parts that were re-recorded, and I'll let the band explain:


We've 'polished' the existing version. We've always had the desire to revisit the album as it's "special" to us, and as Kscope were re-releasing it, this was an good opportunity to do so. Drums needed re-recording anyhow (as there was another drummer on the original), so we started to add and remove. As for repurchase for fans, we wanted to give more added value rather than "just" a remaster. And for potential new fans - a good introduction to the world of Gazpacho.Chances are the changes aren't audible for many of you, just a general feel of improvement is our goal - and not to change the mood of the album. By the way, on this digibook you'll get older pictures of us recording in the actual cabin where "Night" was written - back when we were young and hopeful.

Suffice to say that the remastered sound is huge, and the video below does not begin to do it justice.

From the moment the ghostly atmospherics and strange distant voices usher us gently into Dream Of Stone to the last cycle of the last returning violin refrain of Massive Illusion, leading us back out into the quiet of the night, this album is a joy to listen to, and one I find myself humming parts of as I go about the daily grind.

Comparisons have been made to the more epic side of Radiohead, and Talk Talk have been mentioned too, but this band have their own distinctive identity, steeped in a dark mystery; a murder mystery this time round perhaps, as allusions are made to the shootings of both Andy Warhol and John Lennon.

The brooding atmosphere is conveyed by textures rather than dramatic flourishes and each part/song stands in its own right. Some parts are stronger than others but the listener soon becomes engrossed in the unfolding sonambulistic trip through the netherworld of dreams. Taking a cue from classic post-rock but adding layers of instrumentation and sundry noises off, whistles and voices weave in and out as we progress in a stately fashion, much in the same way the Moon passes across the night sky.

Opening with the epic Dream Of Stone, anchored by Kristian's majestic deep sonorous bass and Lars' uncluttered but powerful on-the-one drumming, the song laps at your psyche in gentle but insistent waves and pretty soon the Sandman has transported you away into Gazpacho's dreamworld. The band function as a magnificent whole, there is no room for spotlight hugging by any one member, something lesser bands than this would do well to remember. This is BIG music that goes beyond convenient labels and simply IS. About 12 minutes in a haunting violin refrain conjures images of mist-shrouded grey hinterland as the song steps over a threshold, Kristian's insistent thundering propelling the thing to the edge of a rocky abstract place. Without a breather the cityscape that has appeared is swaying before your eye, and the journey continues, our hero seeing himself reflected in glimpsed lives on the 12th floor as he passes through Chequered Light Buildings. The music has taken on a symphonic piano-led theme, the simple chord progression not so much hampered by the need to stick to the theme, but attempting to shake itself free, as Jon-Arne chops chords straining against an imaginary leash, finally coming to rest.

Some lovely piano work leads Upside Down which is full of subtle electronica, keyboard maestro Thomas and guitarist Jon-Arne trading the melody before the textural washes resume, while "Rubicon's old bridges burn", reprising a theme from Dream Of Stone. Ending with owl hoots and the accordion and whistles of The Duke, whose contributions throughout have added to the spooky miasma. Harking back to an earlier more folky version of the band, Valerie's Friend, a story from the perspective of Warhol's would-be assassin, suddenly explodes with massive chords and becomes a righteous sonic beast of a thing. This is heavy, but most definitely not metal, and as fine an example of the old quiet/loud routine as I've heard in a long time.

We end with Massive Illusion which alludes to the death of John Lennon and morphs into a campfire clap-along about "living your life as a ghost" and how the anti-hero (the assassin?) has been "freed from the chains of what has remained of a life". If the old Radiohead comparison raises its head, it's here, as the song lurches along in a threatening fashion, but soon the lovely violin refrain from earlier has returned and we're coming to the end of a night with Norway's finest exponents of epic modern folk music, for that is what this beauty is.

Buy this, you know you need to, buy it here!