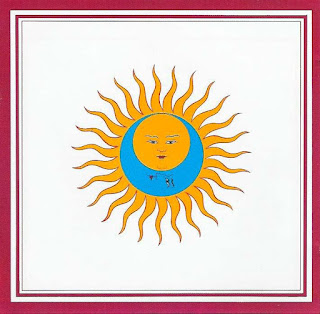 The latest in the King Crimson 40th anniversary remixes from Professor Steven Wilson's laboratory is their 1973 opus Larks' Tongues In Aspic, which marked the debut on vinyl of the core Bruford/Fripp/Wetton line up, that, in my opinion was the most adventurous of all the line ups of the band and with this album, 1974's Starless And Bible Black and Red they gave us three albums unsurpassed in musical adventure and envelope pushing. These three albums are the first wave of prog's pinnacle, and only Van Der Graaf Generator were as consistent in actually doing what the genre label implied; progressing.

Those KC fans with fat wallets and too much time on their hands can indulge themselves in the 15(!) disc box set that includes various polished live bootlegs and Robert Fripp's laundry list, Bill Bruford's drum sticks and Jamie Muir's empty blood capsules...or something similar I've no doubt.

Me, I've made do with the CD/DVD package, and boy does that contain some stunning music. With previous remixes SW has remained relatively faithful to the original mixes, merely adding clarity and restoring lost subtlety. As was often the case back in the day, bands had to rush to record albums while on the road or in between tours, and this one was no different. The band were dissatisfied with the end product at the time, and so Steven has allowed himself freer reign and together with Robert overseeing they have come up with what the thing should have sounded like in the first place.

From the very first Eastern percussive tinklings of Larks' Tongues In Aspic, Part One you can hear things in here that you were not aware of on the old vinyl record. Listening to the 5:1 mix on the DVD is like discovering a completely new KC album, or to put it another way, it's like listening to LTIA after an ear syringing with a firehose. LTIA, Part One was never one of my most returned to KC tracks as it had the air of, well not filler exactly, but it seemed like a good idea stretched too thin; well, now I understand; the tension created in those first 3 minutes is the perfect foil for John Wetton's monstrous wah-bass and Fripp's mekanik riffing. I wonder, listening to this with fresh ears, if John was aware of Jannick Top from Magma, for their approach was very similar, as both have a penchant for crushing slabs of marching beats that brook no opposition, and previous to Crimson Mr Wetton was nowhere near as fierce. Quite how David Cross coped onstage competing with a mere violin is beyond me, but his contribution on this record is essential, lending some much needed sonic relief, as his near-ambient counterpoint 8 minutes in attests.

Pete Sinfield having left the fold, the lyric writing is contributed by Richard W Palmer-James, and his first contribution is to Book Of Saturday. Less mystical and away with the fairies than Pete, Richard's lyrics are less ambiguous and more human. John now becomes Crimson's fourth singer in as many years, and although his voice is not particularly distinctive, it does the job well enough. A welcome piece of structure after the avant opening track, Book Of Saturday is a quite charming little ditty with some nice violin, backwards guitar, and effect-free guitar. It's over in no time at all, and we're into Exiles, one of Crimson's best pieces of strangeness...and there's a song in there too. Steven has really gone for it on this one as the opening with its introductory bubbling synths and washes of layered violin and mellotron are brought well to the front of the mix before the plaintive song gets into its stride. Here, John shows that, yes, he can actually sing a bit. The instrumental sections between the verses are given a great treatment by Steven and what was already a marvellous piece of work is now simply no less than stunning. The between-verses instrumentation adds a layer of dislocation commensurate with the subject matter of an immigrant adrift in a strange land related in the more conventional sung sections.

Easy Money for me is the one song in Crimson's repertoire that I had thought I'd be quite happy never to hear again, even more so than Schizoid Man, as I thought I was way too familiar with it, as the live recordings from this era are über-plentiful, and it seems to appear at least a hundred times in my collection. Boy, was I surprised that Steven Wilson had managed to inject fresh life into the old warhorse, as right from the start when Jamie's clanking chains and metal sheet clanging underpin the slow funk introduction to the song, it opens up like an alien flower. It's Jamie's hitherto only glimpsed percussive frills that illuminate the song and give it a new life. The instrumental section takes on a spacious groove that lets the listener into places previously barred. You can feel Fripp oh-so-slowly ratchet up the tension with his familiar cyclical guitar figure as it pulls and stretches the song to new heights. Bonza!

The climax of the album has now arrived, and Talking Drum, driven by John and Bill charges along at a pace. Bill Bruford has until now been in the background, content to keep the train on the rails while Jamie does his court jester thang, but on this song he keeps Jamie's madcap antics well in check with some great tom-tom work, rimshots aplenty, matching Jamie beat for beat. David Cross saws away in the background like an angry bee as the for once simple rhythm is at first quietly and later pounded out by John in typical muscular fashion, left foot pumping away on the old wah-wah pedal, while Jamie's bongos chatter away like a troop of chimps. Robert's sustained guitar rings with a reinvigorated clarity over the top, begging you to turn up that mother. If this thing doesn't get you tapping your feet, then I'm afraid that you must have already died.

Then it's that storming riff that every prog fan worthy of the name knows inside out. Ensemble playing tight as a gnat's chuff, this is a group that know they're on to something a bit special. The sheer power of the thing hints at what is to come on the Red album, but David's violin, which will be missing then, gives this line up an air of completeness that Red would miss. Bill's powerful and no doubt complicated fills behind the riff after the famous drop-down still brings a smile to my face, and now I can hear everything that's going on with 100% clarity. Thanks a lot Steven, you have done a sterling job on this one that's for sure.

Amongst the extras on the DVD is the Alternate takes and mixes run through of the album, including an instrumental mix of Easy Money complete with a Jamie Muir solo section. For this fan the alternate takes section is worth the entry price alone, and hearing false starts to Larks' Tongues In Aspic, Part Two and a stuttering entry into THAT riff section makes you appreciate the hard work that went into creating the finished song. Exiles sounds completely different and far more musique concrète than it ended up, and another run-through of Easy Money ends the alternate takes section with a longer and looser version that sounds like it is being improvised on the spot, Fripp building the melody line up and up into the stratosphere; the whole shebang is captivating.

You can also see the line up in action on the video footage included from Germany's Beat Club, and being typically perverse here the band decided to do a 30 minute improv and the least radio-friendly track from a new album on a rare TV showcase. Never one to take the easy route was Robert, eh? The 30 minute improv wasn't broadcast; it's not particularly stellar, but it is an invaluable document, and as David says in the expected comprehensive and informative booklet, he was scared witless as he had not a clue where it was going, and the only way to avoid being drowned in John's pounding wah-bass was to stare him in the eye throughout. It makes for compelling viewing!

If you're a prog fan you've probably already got this, and if you haven't, why not? Put that rubbish neo-prog codswallop down and get some real music, ya softy!

Buy both the gargantuan and sensible versions at Burning Shed - you know it makes sense!