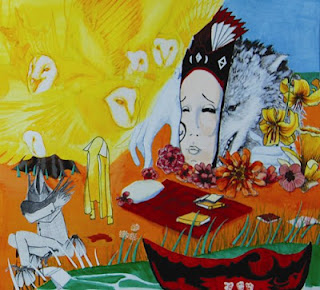 Formed around the core of brothers Patrick and Dan McGowan, New Jersey's The Tea Club have recently completed their third album Quickly Quickly Quickly, out on 15th November.

If first album General Winter's Secret Museum was progressive pop, and sophomore effort Rabbit is neo-progressive; both if you will serving an apprenticeship, then Quickly Quickly Quickly is a full-blown progressive rock spectacular, complete with obligatory epic songwriting, myriad time signature shifts and complex instrumentation.

The band's musical ambition is easily traceable by the ever-lengthening song times from those on General Winter... onwards through to the 18 minute Firebears that opens this album. By necessity the increasing duration of the compositions make this album less instant that the previous two, and the increased complexity of the music requires more patience from the listener. Having given the album time to sink in, it may be the case that in certain aspects the band have let their vaunting ambition get the better of them, as Firebears can come across as being a little too clever for its own good, and gives the impression of being less that the sum of its parts, good though those parts may be.

Charging out of the gates at a joyous canter, the opening theme sounds promising as the track builds, referencing Yes and The Mars Volta. The former's influence is down to the epic intent of the song and the sometimes Squire-like bass sound; the latter's simply because of the way their songs in general are vocally structured, TMV having been a long-term influence. Classic prog references continue in the quieter and much less frantic middle section, where a Genesis atmosphere is present, until some lovely piano work from Becky Osenenko takes it somewhere else.

However, that opening theme is difficult to pin down, the melody sometimes getting lost in the technical overload; that's not to say there's pointless shredding, there isn't, the song just seems over-fussy in places to this listener. "Did this song actually need to be 18 minutes long?" I ask myself, and, so far, I can only say "No, it didn't".

I think that the main problem with this epic is that it sounds like three songs cobbled together: as I said earlier the opening fast-paced theme is rather good but soon gets lost, and the slower-paced middle section is actually a damn fine song in its own right, but the end section is frankly a bit of mess. Of course my opinion may change the more times I listen, and as The Tea Club are such a talented group of musos, and a decent bunch to boot, I only hope it does.

Always a strong feature of this band are the strong vocals of the brothers McGowan. On Firebears Patrick takes the lead, his voice being similar to that of Matt Bellamy of Muse, and brother Dan whose higher register can bear an uncanny resemblance to Jeff Buckley, joins in on the harmonies. As for the subject matter, abstraction is the name of the game, although like the song itself, the lyric seems a little unfocused.

The rest of the album, I'm happy to report, is far more successful at getting its point across, and The Eternal German Infant instantly redresses the balance and is a much more cohesive song than its predecessor, Dan lending his soaring voice to a fairy tale seemingly about the tipping point for chaos to a soundtrack that while complex stays just this side of chaos itself. I've made the comparison before, but this song is "Jeff Buckley goes prog", no question,and I don't have the slightest problem with that.

Mister Freeze is a slow-paced funereal thing of Gothic menace homing in on loneliness and the protagonist's disillusion with an unknown text, built around a dark bass melody. After the frantic twists and turns of what has gone before this is a welcome, if slightly unsettling, change.

Closing number I Shall Consume Everything which as the title may suggest is a song of unfulfilled lust, both physical and material, and clocking in at well over 9 minutes, is the other "long 'un" on the record. The convolutions of earlier are back but make more sense than on Firebears, the unsettling nature of the frantic musical changes matched by the unsatiated lyric which builds into angst-filled barely suppressed rage as the narrator is not getting as much as he thinks he needs. He arrives at a sort of redemption, reflected in the airborne vocals, borne aloft on a chorus of ringing bass and guitar; all very Yes-like, but without being copyist and still very recognisable as The Tea Club.

It has been the case with the last two albums that the CD booklets were full of the brothers' idiosyncratic artwork, and I'm sure the same will be true of Quickly Quickly Quickly, judging by the ambiguous cover art.

Always in a state of flux, the group who recorded this album has since reverted to a trio of the two McGowans and drummer Joe Rizzolo, keyboard player Becky and bassist Charles Batdorf having since left for pastures new, so touring this record is going to mean new recruits and no doubt further shifts in the band's sound, but always led by Patrick & Dan's epic pop sensibilities. The ever-changing line up may well have been a factor that contributed to the sometimes incohesive feel of this album, particularly on Firebears. Indeed, the band had already recorded 80 minutes of material for this third album with a third guitarist in the line up who then left, necessitating the remaining five members re-recording the tracks that ended up on Quickly Quickly Quickly. That cannot have helped matters at all, as I'm sure time constraints came into play, but one can only hope a bit more self-editing in the "long song" department is displayed on the next album. Incidentally, I'd love to have heard all 80 minutes of the material with the third guitar player!

In conclusion, Quickly Quickly Quickly is a classic case of "difficult thrid album syndrome", and is half of a very good record indeed plus the 18 minutes of the slightly disjointed Firebears; but at just under 43 minutes long in total the album doesn't outstay its welcome, and like I said up there, Firebears may yet worm its way under my skin. Quickly Quickly Quickly is still definitely worth checking out as it shows no little ambition and skill and could show a lot of so-called prog bands quite a few tricks that don't rely on cliché.