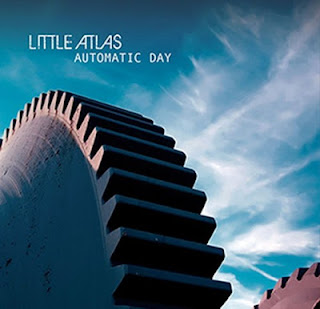 Miami new art rockers Little Atlas return after a gap of six years since 2007's Hollow with an album that is nothing if not ambitious.

Blending the influences of classic progressive rock of both the British but more so the American variety, the vast cinematic scope of the compositions that comprise Automatic Day fill nearly every available second of a single CD.

As a result, this is not a work that can be readily absorbed in one, two, or three sittings. Personally, I find that the ideal length for a CD album is around the hour mark. Any less than that and the listener can sometimes feel short changed. Any more and it can become hard work maintaining a level of interest, and unless the compositions are consistently gripping, or offer enough twists and turns to justify what can be an excessive length, I find my attention wandering.

It is just as well then that there is more than enough going on here to tempt me back several times, although it might have been a good idea to be a little more inventive in the running order. With the exception of the ten minute Illusion Of Control, six of the first seven tracks are all around the eight minute mark. Maybe this procession of similar length songs could have been broken up by the three shorter tracks, all stuck at the end of the record?

Despite me mithering on at length about this it is only really a minor drawback, as the music itself is intricate and involving without being knowingly complicated or self absorbed. The songs are mostly written by the core members Steve, Roy and Rik, with relative newcomer drummer Mark Whobrey co-writing "a few" as leader Steve Katsikas tells me.


Covering subjects linking the mythical, the stellar, the metaphysical and the politick, both personal and impersonal, Steve Katsikas has crafted a set of intelligent lyrics that to highlight one particular trio of songs make a stately progress from Greek mythology (Twin of Ares) to man's helplessness at the mercy of the passage of time (At the End Of The Day), via a depiction of Nature as the true deity (Emily True), without seeming in the slightest part contrived, or indeed jarringly disconnected, as could have been the case with a blunter intellect holding the pen. OK - so the lyrics to Emily True are actually by poet Emily Dickenson, but these three songs manage to flow seamlessly nonetheless!

Musically, Emily True manages to mix Rush and Blue Oyster Cult with an epic vision to come up with a new art rock template for the 21st century, and a fine beast it is too.

Illusion Of Control continues an undercurrent of darkness that runs through the album, and would not have sounded out of place had it been penned by Amplifier around the time of The Octopus. Although not quite as heavy (but heavy enough!) as the Manchester sci-fi prog metallers, it is yet more evidence of a new post-prog zeitgeist currently weaving its smoky tendrils through the subconsciousness of a fair number of bands around the globe.

The song contains a cool synth solo after the prog-metal-lite first section, before turning around on an acoustic refrain, with Steve's voice and the entwined backing vocals, a feature of most of the songs here, recalling fleeting visions of British prog giants of yesteryear, but never as mere imitation, as Steve muses on subsumption by isolation into the self.

Never forgetting the value of a structured song, there are no aimless instrumental passages, and no displays of musical ego on Automatic Day. Everything is kept tight and to the point. Probably the best song on the record is We All Remember Truth, which within its economic four minutes manages to display all the virtues of the first two sentences in this paragraph.

Ending with a jaunty, almost throwaway new wave number, Escape Velocity is a fittingly upbeat end to a fine record.

While this album may have worked better as a double CD, there can be no doubt that this is a triumph of modern progressive rock, with a high degree of skill shown in arrangements and in compositional ability, and can be recommended with assurance to any lover of the genre.