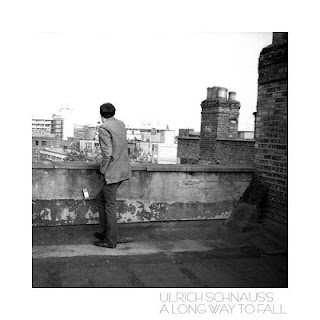 Bringing glacial Teutonic soundscapes into the world of UK shoegaze, Ulrich Schnauss is something of a celebrity down that particular musical side road.

To a greater or lesser extent his previous solo albums have all fused the dreamy nature of the original UK shoegaze movement with the caress of synthetic polished melody, mostly to good effect.

Ulrich has also had a hand in numerous collaborations and is (was?) also a member of UK post-prog band Engineers. A Long Way To Fall is his fourth solo album proper, and takes his sonic template to a slightly different place from before, a place where the skies are darker. The melodies slowly reveal themselves to you after several listens rather than the more instant appeal of some of his other work, and that's just how I prefer it.

Enigmatic and engaging in equal measure, right down to the high quality and subtly humorous art prints in the digipak, which features several glossy photos of run-down sheds, A Long Way To Fall is a highly enjoyable slice of modern progressive electronica.

Being entirely instrumental, I did not immediately pay attention to the track titles, but it seems the music conveys the intended atmosphere. An atmosphere that led me to describe this as coming from "a place where skies are darker" above, and indeed The Weight Of Darkening Skies shows that Ulrich has nailed that particular perception.

Not that it is all doom and gloom, far from it, for opening song Her And The Sea instantly transmits that trademark Schnauss mix of melancholia and optimism, with washes of minor chord synth ebbing and flowing above the upbeat sequencers, all very nice indeed.

Anyone familiar with UK business-pitch reality show Dragon's Den will recognise the synth patch chording at the beginning of Broken Homes, but according to The Gospel Of Almost Truth that is Wikipedia, the TV series' incidental music was down to one John Watt, so it must be a coincidence. That aside the song, with its disembodied voices and embellished retro computer game sonics sounds like FSOL in places, not that there's anything wrong with that.

The upbeat Europop of Like A Ghost In Your Own Life is followed by the title track, and we are back to gorgeous melodies buried just below the quicksand surface of shifting synth washes. A truly lovely piece of music.

I Take Comfort In Your Ignorance, remixed four times as bonus tracks on the expanded edition of the CD, is a much darker and brooding affair that fans of Depeche Mode should dig. The previously smooth sounds on the album are now beginning to be submerged by something nasty rising from the deep, distortion making a muted appearance. Played loud this is one monster of a track and my favourite from the album.

Oddly enough, The Weight Of Darkening Skies does not carry the menace it implies despite its odd melody structure, and is almost jaunty, albeit in an unexpected fashion.

Ten Years unfolds like a cinematic vista in a seemingly benign landscape where time has stood still for centuries. Both vast and intimate, this is another song that could only have flowed from Ulrich's banks of technological wizardry, and it is another high point. Play it with the lights out and the volume turned up for maximum effect.

The album ends with the equally out-there A Ritual In Time And Death, the bubbling sequencers recalling Klaus Schulze who must have been a backdrop to Ulrich's early musical development, given both his instrument of choice and his country of birth. While Klaus is undoubtedly an influence, with A Long Way To Fall the pupil has shown he has left the teacher way behind.

Schulze would have been proud to have come up with something as refreshing and adventurous as this rather than his somewhat tame latest offering Shadowlands, but equally I am sure he would give credit where credit is due to his compatriot and modern-day alter-ego.

A couple of weaker tracks aside, this is an enjoyable and complete album, a must for fans of modern electronica and progressive music in general.

Ulrich does not appear to have his own website, so buy it from Amazon. You don't need a link for that, surely?! :)