The Wrong Object - After The Exhibition 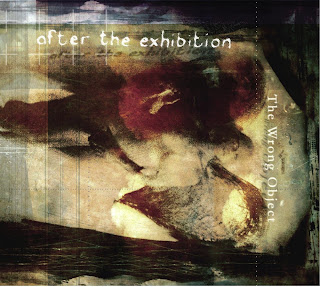 Every once in a blue Moon in June, an album comes along that even on first hearing knocks you sideways with its consummate brilliance, and for me After The Exhibition by Belgian jazz-prog-fusion collective The Wrong Object is that album.

There have been records recently with a similar initial impact but you can tell on listening to this that unlike most of the others After The Exhibition is that rare thing; an album to love at first hearing that you just know will only get better and better with the passing of time.

The group started out as a Zappa covers band in 2002, and went on to make two albums with jazz big hitters Elton Dean (The Unbelievable Truth) and Annie Whitehead (Platform One) before having the confidence to strike out on their own back in 2008 with Stories From The Shed. They have also made a couple of live albums, one as part of Zappanale 2008 with Stanley Jason Zappa.

Led by guitarist extraordinaire Michel Delville, who is also involved in many other projects, this therefore is really only the band's second studio album proper and the first in five years. A refreshed line up includes keyboard player Antione Guenet, the mastermind behind punk-jazz-fusion band SH.TG.N, who has also recently joined the ranks of RIO luminaries Univers Zero; that I must hear! Joining Antoine are two new saxophone players, and a new bassist, and together they join with Michel and the other original member, drummer Laurent Delchambre, to create a solid and frighteningly proficient unit. Guest appearances on several of the songs by Benoit Moerlen (Gong) with his marimbas and vibraphone add another sophisticated layer.

For me, Glass Cubes, featuring the vocals of Susan Clynes, yet another product of the Belgian music scene and an accomplished jazz pianist and composer in her own right, is the high point of an album that, let's face it, rarely dips below the stratosphere. For a small country the consistent high quality and productivity of Belgium's music scene is quite remarkable. It must be that extra strong beer they drink! Susan's unaffected and natural tones combined with a lovely piano motif lends Glass Cubes a Canterbury atmosphere that fits snugly into the overall pattern of the album, and I for one would like to hear more of this track's particular musical combination. Susan is joined on the harmonies by Antoine, who also weighs in with the sort of deft and lightly toned piano solo that is a delight to behold. Antoine has a truly special talent, and the song's eight and a half minutes fly by in no time at all.

There are so many highlights on this record that singling out more individual tracks is somewhat pointless, although I'm going to have to at some point soon, I'm sure. Compositions twist and turn to great purpose and effect; there is no "complicated for the sake of it" on this album. Searing solo and sweet ensemble playing hits all the right spots, infused here and there with Zappa-esque humour. As well as the Canterbury jazz ballad that is Glass Cubes we visit out-there jazz fusion excursions, furious avant-rock spectaculars, quieter jazzy moments, spacey ambience and tunes that surprise and excite in equal measure, all in the relative blink of an eye. When this CD comes to an end it is so easy to hit "Play" again, and that is something that rarely happens these days.

And so, unavoidably, the time has arrived to pick out some more tracks. Let's start with the three part Jungle Cow suite, which creates a steamy jungle ambience followed by a determined lurch through the undergrowth with Michel's furious guitar scurrying around like soldier ants on a mission. Eventually, wah-bass and more marching rhythms sees the tune leaving a trail of vertiginous destruction in its wake, foliage crashing down, before calming to a gorgeous sax solo that builds to a defiantly noisy climax. Furious'n'fun!

You'll need to listen to Stammtisch at least half a dozen times before you can spot even a proportion of the melodies and counter melodies flying about in what is as classic an example of "tight but loose" playing I have come across in a long long time, and totally joyous it is too!

Right, that's enough highlighting, you'll have to find out the rest for yourself. I've made it easy with the Bandcamp link, too!

Less firmly rooted in avant-jazz-fusion than Stories From The Shed, this album launches the band into places while not uncharted, have not been visited with any regularity since Franz Zappa graced us with his presence, or since Soft Machine called it a day. Indeed, about the only modern band who come close to this glorious melting pot are Soft Machine Legacy, but even the very fine Burden Of Proof is overshadowed by the sheer scope and ambition of After The Exhibition, an ambition that is more than met by this marvellous bunch of musicians.

The Wrong Object take the adventurous spirit of their original inspiration and forge their own unique and regularly breathtaking sonic vision. After The Exhibition is an album that restores my faith in progressive music making, and is a shining example to any of the far too prevalent bedroom Mozarts-in-their-own-imaginings who consider that over-referential, over-long and wilfully complicated noodling constitutes good music.

In conclusion, BUY THIS NOW!!!! From Moonjune Records