Back in the dying embers of my teenage years, which coincided almost to the day with the sun setting on the 1970s I was going through big personal ch-ch-ch-changes. From the early years of my senior education at what was then Wellingborough Grammar School, having got into the A stream, for some reason I still cannot explain I gravitated towards the kids who were sons of well-to-do middle and upper middle class parents, who all lived in the more expensive enclaves of the posher villages of East Northants.

In those days England was still completely defined by the class system, your roots largely determining your destiny. Nowadays social strata is defined by money, class is largely irrelevant. I was from a family that was skilled working class morphing into lower middle class. Why I did not try to socialise with kids from my own background is a mystery to me, maybe I was subconsciously social climbing. I think I must have realised this, for almost as soon as I left that institution of pressure cooker learning I began to shed my school friends, who by now were attending Young Farmers Association discos and drinking in Conservative Clubs. I endured the former once, and a hellish experience it was too, picking up on the inmates' overbearing sense of entitlement and watching the gyrations of the Hitler Youth to the strains of Abba. Never again!

Another of the reasons I left my posh friends behind was that even though some of them had little interest in music, they all liked Genesis. This is the post Gabriel version that came to epitomise 80s yuppie culture, an icon for vacuous consumerism and totally meaningless. They said nothing to me about my life, as someone once said.

Helping me along the path to enlightenment was the NME, and previous to that a marvellously rebellious Eng. Lit. teacher. Between them I discovered left wing politics, Satre, Kerouac, Hunter Thompson, Malcolm Bradbury, and of course, punk rock. By the time 1979 rolled around I was already a gig going veteran, but being out in the sticks, revolutionary left wing post punks were thin on the ground and I had turned into an isolated angst-ridden socially awkward ultra left wing pseudo-intellectual. Unsurprisingly I couldn't get laid. Luckily, not long into the 1980s, or The Forgotten Decade as I like to (fail to) remember it, I discovered the deelites of t'herb an' t'ing, and chilled out considerably.

Back in 1979, the accoutrement of choice for the under washed and unshaggable was the army greatcoat, worn year round of course. One thing I have never been is a fashion victim, and I never owned one of those monstrosities, but I wore it metaphorically, oh yes!

The soundtrack to all this was the post punk experimentalism led by Public Image Limited, John Lydon having shaken off the shackles of the three chord strictures of the otherwise seismically revolutionary Sex Pistols, a band who changed youth culture and music forever. Bands like PiL had the freedom to do whatever they wanted and they took popular music to places it never knew existed, let alone visited. It was a time of crazy experimentation, some of which worked brilliantly, some not so much, but even the failures had a certain charm. 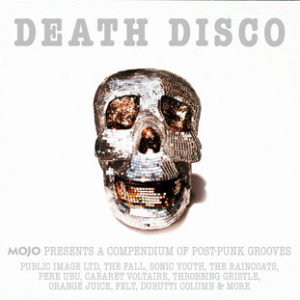 Which brings me round to this month's Mojo magazine cover CD. Mostly these things get played once, if at all, and binned. This time though the CD strikes a chord (probably Em) as it contains a fair few tracks from the personally defining era I have just rambled on about.

It wasn't all grim up (musical) north, as the opening track on Death Disco proves. Primitive Painters by Felt cheats a bit, as it came out in 1985 but the combination of Lawrence's trademark wandering melody lines and Liz Fraser's voice lets it off the hook, and then some. Probably Felt's finest six minutes?

Next up is Simply Thrilled Honey by the funkily poptastic Orange Juice. Released in December 1980 it seems that post punk miserablism wasn't all I remember it to be.

Tracks three and four passed me by at the time. This is an era when the only outlet for this kind of music was the John Peel show, aired on week nights between 10pm and midnight. Even the biggest Peel devotee can't have listened to every minute of every one, and if you missed it, you missed it. No podcasts or iPlayer back then boys and girls.

Some of these tracks I bought on singles or albums, some were preserved on now long discarded cassettes recorded from Peely's show. The punky Wire-like Ain't You by Kleenex, an all-girl band from Switzerland of all places was one of the latter, and it's nearly 35 years since I've heard this charming mess of a single. Words that don't scan, chord changes that make no sense, it's great!

As the daddies of post-punk strangeitude, the mighty PiL are allowed a track from their 2012 reformation album, the splendid Deeper Water. If you've not heard This Is PiL, you really should. Of course, what they should have included is the compilation title. Death Disco, to my then still naive musical ears was like something beamed down from an alternate universe, and it remains a timeless classic. Jah Wobble's thunderous bass shudders with murderous intent, over which Keith Levene's spider guitar weaves with spun glass and forms a web from the centre of which John Lydon howls a lament for his dying mother. Watching this on Top of the Pops amidst all the pop and disco trash was a jaw-dropping moment...no, really! Look out for Mr Wobble's gap toothed grin...

As ever with these compilations a lot of compromises have been made, probably because of licensing issues. So we get new songs from The Nightingales (Robert Lloyd of Prefects infamy), a growling rant that is actually rather good, and Pere Ubu with a typically bleak David Thomas lyric. Something from The Modern Dance would have been preferable. The mighty Fall also crop up with a new one. You either get it or you don't with Mark E Smith's charges, and I do. Rowche Rumble would be my preference for this compilation.

Next up are The Raincoats with Shouting Out Loud, another Peel cassette recording from my past, or did I buy the single? Who knows, but this band came across like a studious version of The Slits, the latter another glaring omission. The introduction of the violin on this record channels Amon Düül II's first album, no doubt unintentionally. The Monochrome Set are another bunch of oddballs, whose precise pop kind of predates math-rock, although you wouldn't know it from this number. Their Fun For All The Family is an inconsequential piece of fluff and comes from 1982 and their third album, by which time I'd lost interest in them.

Next are Young Marble Giants who were far too twee for me, and then comes Cabaret Voltaire, a bunch of miserablists from Sheffield who married primitive synths with industrial noise and dub guitars, creating a dirty funk dub in the process. No surprise then that Sly Doubt from the supremely individualistic 1981 album Red Mecca is right up my alley. It should have been Nag Nag Nag, of course.

Throbbing Gristle were so strange they flew beneath even my radar. As far as I recall I do not think they were ever played on Peel's show, if they were I missed it. I was aware of them at the time but their sex-terrorist image scared the shit out of me, wuss that I was! Hot On The Heels Of Love, taken from the equally ironically titled 1979 album 20 Jazz Funk Greats sounds like Kraftwerk and is nowhere near as frightening as I was led to believe at the time, as I later discovered.

The compilation ends with Vinni Reilly's sublime Durutti Column, and A Silence is taken from the 1983 album Short Stories For Pauline. A simple but effective song in the style of low key New Order, built around Vinni's trademark reverberating guitar, it is a good end to a CD that has flashes of brilliance but is largely frustrating, as is the manner of these things.

Mojo make up for it with a spread in the magazine on THE classic tracks of the era. Not that Mojo need publicity, but this month's issue is well worth a look if you were the right age at that time, like yours truly.