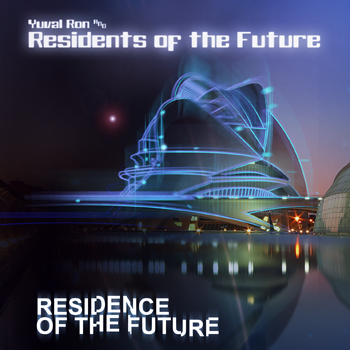 The rather wordy name given by Berlin based Israeli guitarist Yuval Ron to his band contrasts with the music they produce, which is not in the slightest unwieldy, unlike the name and this sentence!

This truly ambitious album is introduced by the wordless soaring vocals of Dorin Mandelbaum on Prelude, in a manner that would not sound out of place on a Magma album.

Her dulcet tones are also present on Objects In The Mirror Are Larger Than They Appear, a ten minute journey that neatly encapsulates what this band are all about. Taking in progressive and space rock, jazz fusion and Dorin's chiming vocals, the tune neatly avoids categorisation, and is simply a display of well played adventurous music that does not get lost in complexity for its own sake.

Never afraid to explore, the sonics become more stretched out on Watching Over Shizutani Kou Bay, a two part musical trip that begins in ambient territory, developing along avant lines with some atonal and minimalist piano over the abstract electronics. Part two is more conventional, the band locking into a nice fusion groove for the duration, enlivened by some fine soloing in the manner of Zappa from Yuval.

Residence Of The Future is undoubtedly Yuval Ron's baby, as he wrote all but one of the songs, as well as donning the producer's hat. Yuval lets his band speak for themselves and does not attempt to dominate proceedings, allowing his charges to revel in effortless ensemble playing, and there are no unnecessary star turns. The title track throws a dimmed spotlight on some delightful piano from Aviram Gottfried, and following this is a consummate fusion bass solo from Yaniv Shalev, and not to be left out some cool understated guitar work from Yuval. The song itself has a strong Pat Metheny Group feel to it, and there are far worse things to be influenced by.

This is an album that has an emotional depth, played by musicians at the top of their game. As well as being a classy record, it is not afraid to go out on an experimental limb now and again, successfully I might add. Residence Of The Future has been hanging around in my "to do" pile for far too long, and I am glad I finally got round to putting fingers to keyboard. Thanks must be given to Nick at Prog Sphere, who alerted me to this fine work in the first instance.

Highly recommended for fans of polished fusion and for those who like a record to take some risks.