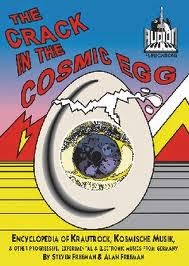 Since hearing Can on Top Gear in the 70s I have had a thing for what is commonly known as Krautrock, a coverall description for a lot of largely unclassifiable music coming from the German baby boomer generation in a golden period between 1969 and 1975 (approx). Unhindered by a forced marriage to the blues that became the roots of 60s popular music in Britain and, more naturally, in the States, our German cousins looked to jazz, ethnic folk music and avant garde European classical music for their inspiration.

Mix that with spoonfuls of psychotropic drugs and the radical politics of the European hippie movement, and of course, rock'n'roll instrumentation and amplification, and you have a veritable melting pot of sounds. Music that ranged from free-form jazz rock, through psychedelia and modern classical, and out, way out into the far beyond.

In 1996 the Krautrock bible for the serious follower and the simply curious was published. The Crack In The Cosmic Egg was an exhaustive reference book containing probably all anyone needed to know about the 70s German alternative rock scene. A labour of love produced by Krautrock devotees Steve and Alan Freeman, the book is now long out of print but is currently available in long and condensed form from the their website Ultima Thule, so named after the famous sub-Floydian single by Tangerine Dream, and also once an esoteric record shop run by the brothers in Leicester.

That's not all, the Freemans also occasionally release highly obscure music from the era on their own label on limited edition CDRs. Some of these are limited to print runs of only twenty, so you'll have to be quick. One such CDR is No.4 by Alcatraz, here's a sample:

I'll admit Alcatraz are not a band I am familiar with, but that was an utterly splendid piece of Germanic jazz fusion, described thus in The Crack In The Cosmic Egg:

"...they mellowed further on No.4, with a very much 1980's styled cross genre jazz-rock with a funky edge, akin to instrumental "guitar" Zappa, or the likes of David Torn or Terje Rypdal & The Chasers."

There is some groovy stuff out there on Ultima Thule, be sure to check it out!