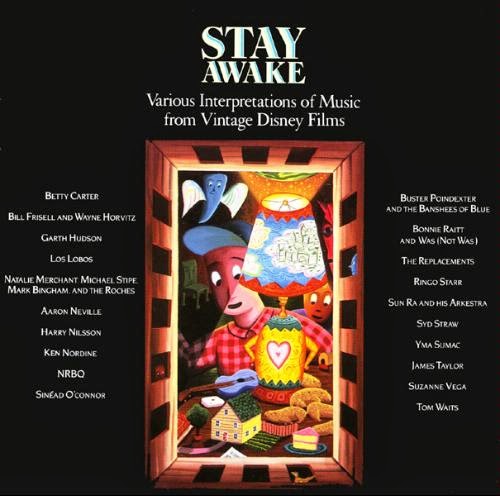 Thanks to my mate Phil I am now listening to a long forgotten gem that I used to have on cassette some twenty five or so years ago, around the time it first came out. The gem in question is Stay Awake - Various Interpretations of Music from Vintage Disney Films, which was put together by producer Hal Willner, who has a history of eclectic compilations, and boy is this eclectic!

This was Willner's fourth excursion into sonic exotica. In 1981 the first was Amarcord Nino Rota, a tribute to Italian composer Nino Rota and his music for Fellini films. 1984 saw That's The Way I Feel Now: A Tribute to Thelonius Monk, and in 1985 out came Lost in the Stars: The Music of Kurt Weill. All three saw large casts of sympathetic musicians lending their own takes on classic compositions. And so we arrive at  Stay Awake, another trawl through the seas of musical flotsam. The album was released in 1988, and continued Willner's tradition of esoteric reworkings of standards, and then some!

On Medley Four, to pluck one example, the way Willner manages to somehow make sense of a medley that contains Americana, C&W, a band of musical magpies, a jazz chanteuse, a garage rock band, and his trusty jazz guitar'n'piano backbone of Bill Frisell and Wayne Horovitz is nothing short of genius.

The album opens with a woozy take on Hi Diddle Dee Dee (An Actor's Life For Me), narrated in true basso-profundo thesp style by voiceover artiste Ken Nordine over Frisell & Horovitz's heady backing. This is followed by some charming singing in the round led by The Roches with help from Merchant and Stipe and long-time Willner collaborator Mark Bingham, presumably arranging the tune. The trip has well and truly begun!

Highlights are too many to mention, but I particularly like Bonnie Rait and Was Not Was' interpretation of Baby Mine from Dumbo. Bonnie's effortlessly smoky voice and the lazy bluesy backing from the "brothers" Was fit together just perfectly.This is followed by the instantly recognisable Tom Waits, then in his prime "kitchen sink music" period. Tom snarls his way à la Beefheart through a marvellously outré take of Heigh Ho (The Dwarfs Marching Song) to the backing of his trademark clatter and thrum.

As previously alluded to, the musical glue that links a lot of these performances comes from Frisell and Horovitz, whose various guitars and other stringed instruments, and keyboards of various hues keep this impossible construct on the rails.

Buster Poindexter is, as you no doubt know, the alt-showbiz alter-ego of none other than David Johansen, who is enjoying himself no end on the deliciously hammy Castle in Spain that opens the very odd Medley Three. Immediately following the incognito New York Doll, we have an operatic warble from the multi-octave range of exotica singer Yma Sumac, and following that, a dreadfully cheesy gospel version (!) of The Mickey Mouse March from Aaron Neville. It is so cringeworthy....it's still bad! I remember I always used to fast forward the cassette whenever this came around. I still cannot decide if Neville was being ironic, or if this version was recorded with po-faced seriousness! I suspect the latter, but pray it was the former. Awful.

Medley Four contains a joyful version of Whistle While You Work from musical polymaths NRBQ, and The Replacements' loose-limbed lurch through Cruella De Ville, but the highlight of this medley is Betty Carter's I'm Wishing. You can easily envisage her singing while leaning on the piano in a smoky jazz club. Marvellous! Frisell ends this section with some nice'n'dirty fuzzed up guitar on Dumbo and Timothy.

Sinead O'Connor's very short Someday My Prince Will Come, accompanied by her own acoustic guitar sounds like it was recorded in her front room, and then it's on to Medley Five, with the mighty Sun Ra And His Arkestra doing a surprisingly straight but nonetheless enjoyable take on the suitably lysergically titled Pink Elephants On Parade. Straight that is, until we get to an extended lounge jazz outro. This is the first part of Medley Five, the second part of which is Harry Nilsson's very probably well lubricated take of Zip-A-Dee-Doo-Dah which stumbles carefree down the hall and out the front door.

One tune that doesn't quite come off is James Taylor's curiously slightly out of tune wobble through Second Star To The Right. Perhaps he was in the studio at the same time as Harry Nilsson?

After the return of Ken Nordine's low rumbling voiceover on Desolation Theme, we are brought back to Earth by Ringo Starr's When You Wish Upon A Star, a version that suitably enough reminds us in a throwaway fashion that this is Disney music, after all!

Blimey, it was good to hear that again!

That was the basic track listing, and you can find more detail and the full line up on good old Wikipedia.


PS - Just lately Phil and I have been having heated debates down the pub on the subject of "kazoo jazz", as he likes to call the stuff I listen to, and the anodyne electronica he seems to love. The two circles comprising our poptastic Venn Diagram were parting at an alarming rate, but it's good to see there are still some musical oddities we can agree on. Then there's the rather good new Elbow album, which we seem to agree on too, so maybe those two circles are now being acted on by gravity rather than being flung apart by centrifugal force. I promise not to mention S..... W..... if he doesn't. :)
at April 19, 2014