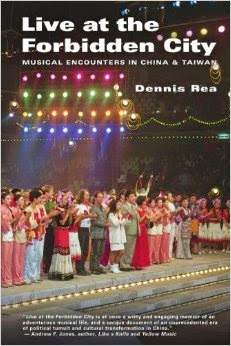 Most of us are born, live and die in the same country, but excluding those driven by economic circumstance, there have always been people with an innate sense of wanderlust and adventure that results in them living and working not just in different countries to those of their birth, but different continents.

Thanks to the internet, a handful of such free spirits I can now count as friends. Even though I have never physically met these people, I am sure if we did ever cross paths in the real world, I would not be able to restrain myself from interrogations about their highly interesting life choices and travels.

One such person is Seattle-based guitar adventurist Dennis Rea. Dennis and I have crossed interweb paths on several occasions; back in 2012 I published our interview and we then collaborated on his career retrospective in these very pages. It was during the process of those interactions that I became aware of Dennis' book Live at the Forbidden City, and Dennis, being a generous guy, was kind enough to send me a copy. It is a damn good read, and I think you should all be enlightened, so here goes...

In 1988 Dennis applied and was accepted for a post teaching English at Chengdu University of Science and Technology in order to join his fiancée Anne who was there on an academic exchange program. In January 1989 Dennis arrived from Seattle, USA, in Chengdu, China. Chengdu, then with a population of around three million is a central inland city, and capital of the remote Sichuan Province. According to Wikipedia, the city's population has since expanded to an alarming 14 million!

Eventually overcoming the inevitable severe culture shock, Dennis tentatively sows the seeds of his musical career in China by giving guitar lessons to university students. One thing leads to another, as we will see later.

The timing of Dennis' arrival in that mysterious land was significant, for a mere six months later China's leadership's dichotomy between the strict disciplines required for a centrally organised economy and the country's new flirtations with capitalism and its perceived so-called "freedoms" came to a head with what we in the outside world came to know as "Tiananmen Square".

Unsurprisingly, the kicking against the pricks was not restricted to the capital, although it may have seemed that way at the time to the outsider. There were few if any foreign journalists in other population centres, and the uprising in Chengdu suffered the authoritarian crackdown more than most. Dennis, his fiancée and a handful of other Westerners on the university campus were in the privileged if frightening position of witnessing the carnage firsthand. Dennis' account of those fraught times has since been quoted in numerous texts on the subject, most recently in a soon to be released book on the tumultuous events of 4th June 1989 entitled The People's Republic Of Amnesia: Tiananmen Revisited by NPR correspondent Louisa Lim.

China's relative openness to outside influences up to that tipping point was presided over by leader Deng Xiaoping, whose reluctant acceptance of his country's new direction is neatly summed up by his quote on the first leaf: "If you open the window, some flies are bound to get in".

The crackdown apart, Dennis, as one of those "flies", seems to have enjoyed a relatively hassle-free existence on the Chinese mainland as a teacher and also as a musician, the latter occupation starting from those previously mentioned small beginnings and culminating in massive China-wide tours and guest spots with the stars of China's then infant rock scene. Below is a shaky crowd video of Dennis and his band Identity Crisis backing the most important figure in Chinese rock, Ciu Jian, a man who Dennis describes as "a one man rock'n'roll revolution".


To our jaded Western ears this sounds pleasant enough, and puts me in mind of Peter Gabriel, but Yi Wu Suo You or Nothing To My Name was Jian's totemic anthem, a song whose lyrics of alienation and and isolation, helpfully translated into English in the book, struck a reverberating chord with Chinese youth, long suffering under the twin yokes of repression and stifling conservatism. With that perspective in mind it is easy to see how Nothing To My Name and the rest of Ciu Jian's 1989 LP Rock'N'Roll on the New Long March was inflammatory stuff indeed, and landed its author in all sorts of trouble.

The video was shot in early 1991, by which time some tolerance of decadent rock music had returned. The venue was Maxim's in Beijing, a restaurant owned by Pierre Cardin in a cultural "grey zone" where China's version of rock'n'roll excess was largely left alone by the Public Security Bureau. The sound quality of that clip is not the best, but it serves as a tantalising glimpse into the world Dennis portrays so well in the book. This is what the song sounds like on the original LP:

Incidentally, two of the comments below the live video come from members of Identity Crisis. Bryce Whitwam who is invisible in the video played keyboards, and an also obscured Tom Vest was behind the drums. Dennis is the slightly bemused looking fellow on guitar to the right of Ciu Jian as we look, and the bass player to the left is Andreas Vath. The crowd in the back room of the restaurant seem to be having a whale of a time, despite having been treated to the dubious delights of the expatriate support act, whom Dennis disparagingly described as "frat rockers".

As well as Dennis' many and varied musical exploits as he blazed a cultural trail across the country, the book is full of humorous tales of derring-do, and sundry farcical episodes. Life threatening equipment set ups arising from the technical limitations of China's wiring systems, and from misunderstandings by "sound engineers" abound, along with metaphorical crossed wires from the nuances of language lost in the translation.

Also highly amusing, but insanely frustrating for Dennis and Anne at the time was the protracted tale of their attempts to overcome Chinese bureaucracy in order to marry, a tale that ends in a kind of deflated success that encapsulates Elliot's "Not with a bang, but a whimper". Orwell had nothing on the Chinese. Also, the tale of his impromptu mountain trek wearing wearing only a dressing gown and slippers is a delight. I exaggerate there, but not by much!

Dennis also had the rare distinction of being one of the first Westerners to have an album released by the State owned China Record Company. A lot of thought went into that label name, obviously. Shadow in Dreams, on the back of his growing reputation as a messenger from the land of decadence went on to sell a respectable 40000 copies, and was listed as one of the ten best releases of 1990 by the Communist Party newspaper China Youth Daily.

Dennis' writing style is engaging and easy to assimilate, and much like his music there is a directness and absence of pretence, as well as an obvious joie-de-vivre. This was no place for a misanthrope, after all! The book has some amusing chapter titles which give an indication of the author's impish sense of humour and polished wit; Anguish as a Second Language, The Great Wall of Sound, The Feelmore East and The Gang of Formosa being but four.

That last one arrives about halfway through the book. In April 1990 Dennis and Anne leave China for Taiwan (the former Portuguese colony of Formosa), following Anne's work, and the prospect of better paid employment for the both of them. Taiwan, a capitalist state then run with an iron fist, and propped up by the Yankee $ was to prove a far less satisfying place culturally for Dennis, in thrall as it was to anything Western in general and American in particular. Because of this there was a sizeable Western ex-pat community, and communications with the outside world were easier, as was the forming of bands. And so it was that from his base in the city of Tainan that Identity Crisis evolved, and  in April of 1991 a tour of China was organised, this being the jaunt that included the Ciu Jian date above.

Dennis played with a vast number of different musicians during his time in China and Taiwan, and among the bands he formed were The Vagaries, who also toured China, in September and October 1991, a mere six months after Identity Crisis. The tale of that band's formation and the jumping through bureaucratic hoops required by the event organising committee in order to get permission to play at the China International TV Festival is another highlight. Incidentally, The Vagaries included a young William Rieflin, who later went on to drum with artists as diverse as REM and Robert Fripp; indeed, Bill will occupy one of the three drum stools in the 2014 reformation of King Crimson.

Being a man with a voracious appetite for knowledge, everything in the book is put into historical, cultural and geographical context, and just the right amount of background information colours the anecdotes sufficiently for Live at the Forbidden City to be an informative as well as a fun read.

You can buy the book HERE, along with a proportion of Dennis' vast discography!

Dennis Rea's website There are plenty of photos on the website featuring Identity Crisis and The Vagaries
at April 26, 2014