Necromonkey - (A Glimpse Of Possible Endings) 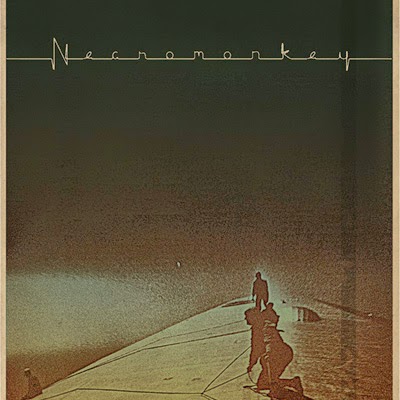 Necromonkey, the project of drummer Mattias Olsson, formerly of Änglagård, and keyboard player David Lundberg (Gösta Berlings Saga) burst forth upon an unsuspecting audience last year with their debut waxing, the bonkers but fun Necroplex.

Firstly, it has to be said that the two protagonists are much, much more than mere "drummer" and "keyboard player", for the description "musical polymaths" would probably be more appropriate.

(A Glimpse Of Possible Endings), to use the album title's rather than the track title's arrangement of parentheses, is a far more considered affair than the madcap debut, the duo having seemingly exorcised the "mad professors let loose in a musical toy shop" of Necroplex.

This new found maturity is a good thing, for it enables expansive sonic washes of sound to slowly cover the aural canvas, most evident on the epic title track, which, to be honest, would not have sounded out of place on a Gösta Berlings Saga album.

The album opens with "There Seem To Be Knifestains In Your Blood", all tribal drumming and early Cure dynamics, led along its path by that very odd thing, the theremin.

Being a big King Crimson fan, I cannot fail to notice the similarity in title of the second track to the Crim's The Sheltering Sky, from the mighty Discipline album. For me, the Crim track is one of the two lesser lights on that otherwise luminescent album, but seeing the title The Sheltering Waters made me listen again.

There is indeed a connection to the Crim track; both wend a slow stately course downstream, and both have a calming effect, and a structural similarity. The Crim connection is underlined by the presence of Rob Martino's Chapman Stick, but The Sheltering Waters is not a direct copy of a sound, but an homage, both in melody and in title. Quite nice it is, too...

The short atmospheric keyboard figure of The Counterfeit Pedestrian backed by synthesiser winds blowin' presages (A) Glimpse (Of Possible Endings). The epic track on the album slowly worms its way into your consciousness like a message from another galaxy, then the track takes off. The array of instrumentation played on this song by our two heroes takes up four lines of small print on the inner CD cover, and includes such exotica as; Glockenspiels, Persephone, Optigan, Orchestron Vocal Choir, and the imposingly named Roth Händle Pipe Organ, named after the studios where the album was recorded. A glimpse (heheh) at the video above will give you some idea of the vast array of kit used on this track. Being YouTube, the sound is not the best, but the production on the CD is top notch throughout. You will certainly enjoy this beastie on your monster of a hi-fi system, have no fear!

This smörgasbord of instrumentation combines with the traditional rock music tools of trade, and a Mellotron used as a sampler, with tape loops containing organ, 8 voice choir, and string section. As well as all that we have the additional musicians (see below), who include Gösta guitarist Einar Baldursson. The end result is grand symphonic progressive rock of anything but the usual kind.

The humorously titled The Worst Is Behind Us closes the album with a faux-Oriental widescreen soundscape. Close your eyes and you can see the credits rolling. This song needs to be nearly nine minutes long in order to fit in the vast array of musical knick-knacks used on this charming little album as they scroll past on your inner eyelids!

Yep, a really enjoyable trip, and a definite progression from the first album, (A Glimpse Of Possible Endings) is well worth a punt if you like sophisticated instrumental music that dares to be a bit different.

Reading the band's Facebook page tells me that the guys are well into recording their third album, which I look forward to with mucho anticipation.

Line up:
David Lundberg & Mattias Olsson - Between them, these two contirbute these instruments, uncredited to either: