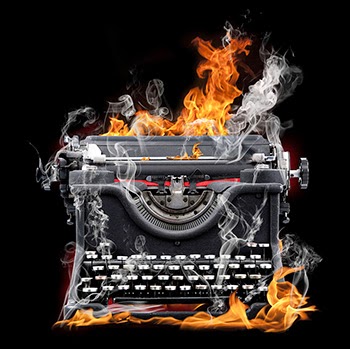 Stirring from my place on the well worn stool at the far end of the bar, where, slumped against the faded decor on the wall I have been enjoying a bit of single malt fuelled shuteye, I am wakened with the need to fulminate...Bartender my good man, make it a double...

The circling sharks in the pool otherwise known as record companies, once a licence to print money, are now not only vastly reduced in number after decades of slothful cannibalism, but also in their scope to make the big buck. Victims of the internet wars, the big players have been slow to adapt to a totally different market. Popular music, where once it was the main leisure activity of everyone from just-teens to forty-somethings, has now fallen way behind computer gaming as the main source of fun spending, particulary among the younger half of that demographic.

In the last ten years or so the few remaining big players in the music biz are blindly shambling along the road to inevitable self-destruction, despearately turning their attention to the folk who made them rich in the first place for their continued existence, rather than concentrating on new music and the way forward. The owners of the cash they are chasing has an average age of probably around the late-fities mark, and back in the day they ("we", actually, truth be said) bought all the vinyl that Pink Floyd, Led Zeppelin, etc etc could produce, and by the shedload, thereby allowing the record companies and the biggest bands their gluttonous indulgent lifestyles. This audience now has spare cash to burn and will probably be the last generation for some time to be in such a luxurious position. As such they are an easy target for that Fleetwood Mac 17-CD, 5 Bluray and DVD 5.1 extravaganza, complete with a bathmat made made from Stevie Nicks' leg shavings, and a replica of a snow mountain, out of which pokes a rolled up fake $100 bill.

Those first two Brit bands mentioned are the latest to be advertising "new" product. Floyd's version of The Emperor's New Clothes is a 20th anniversary multi-formatted splurge of The Division Bell, the band's last weary exhalation that even when it came out sounded tired and redundant. For a mere $134.98, or if you're unlucky enough to live this side of the pond, £99.99 (about $168) you can pre-order this little lot:

Oddly the UK Floyd website does not give an option for buying the 5.1 mix on DVD rather than Bluray, a pointless format and yet another example of the corporate hoodwinking of those who siimply MUST have the latest reproduction platform. However, back over the pond, the DVD with the 5.1 mix is available in the more expensive versions of the box set, the ultimate version of which includes, in addition to the gubbins in the standard box:

All yours for a mere $3500 and your left kidney...I wouldn't mind, if the album wasn't so ploddingly dull in the first place, as my left kidney has been shot for years.
...

The mighty Led Zep are back too, with yet another round of remasters of their back catalogue. One wonders what Jimmy Page has extracted from the mix that he missed last time round? And, if the much chattered about unreleased tracks are so good, why didn't they come out the last time Zep unleashed their sonic fury on a bored world? That last one is rhetorical...

It is rather ironic that the soon come reissue of Led Zep IV has prompted lawyers acting for Randy California's estate to consider suing Page over his alleged lifting of the intro of Stairway To Heaven form one of Randy's songs. What, Jimmy Page nick a riff? Shurely shome mishtake?

These are two examples of the latest major label wallet-fracking© exercises on those with more money and shelf space than sense, and if I may get serious for a moment, this is just the kind of thing that detracts attention and money away from new bands in the progressive scene. I have been told elsewhere that all this is opitional and I don't have to buy it, and I don't disagree, but if I spend £100 now on that Floyd debacle, apart from needing a search party sent out to see if I actually have a brain, it's £100 I won't be spending on Crow/Squirrel Death Match's latest fab waxing. I am in the lucky position of being sent some new bands' releases gratis anyway, for review purposes, but you still won't find me hitting pre-order for either of these excessively bloated and pointless packages.

I will admit to having bought similar boxes of largesse myself in the past, but not many, and most get played once and then sit on the shelf gathering dust. As a bit of a King Crimson fanatic, but not nearly enough of one so it seems, I bought the deluxe reissue of In The Court Of The Crimson King, an album that actually deserves that done to death adjective "iconic", as well as all of the band's 40th anniversary reissue series featuring mixmaster Steven Wilson's fab 5.1 remixes. However, there it stops, Mr Fripp and his wonderful band have seen the inside of my wallet enough for now...until the live gigs, of course!

The recent box sets of Larks' Tongues In Aspic and Road To Red contain a massive 34 (!) CDs between them, and that doesn't include the DVDs and Blurays. Add to that the upcoming and no doubt ginormous Starless box, and the choice-saturated and by now bewildered über-fan will have at their fingertips tens and tens of gigs from a much chronicled time in the band's history from which to choose to annoy the neighbours. Zappa and the Grateful Dead excepted, there cannot be many bands who have had what seems like every minute of their live appearances from a two or three year span released in one form or or another over the years. There is a magnificent live box set (a mere 4 CDs!) from this same period by the mighty Crim called The Great Deceiver (ha!), and as far as I'm concerned it is all you really need. I cannot understand the appeal of owning dozens of concerts from such a short time span by the same band. Yes, the improvs will be different and the dynamics of each concert will vary, but do I really need 27 versions of now ironically titled Easy Money?

In Crimson's favour, unlike the Floyd reissue, Starless promises a lot of previously unreleased material, and their two previous boxes also contained lots of "new" goodies, OTT as it all seems from this side of the bar. At least you can argue that Crim are good value for money, at around £100 per box. Even the Zep reissues contain some supposedly previously unheard outtakes and/or live tracks. This latest Pink Floyd box is an amazing rip off when you think about it, but as they say, a fool and his money are easily parted.

Unless you have far, far too much time on your hands, and no life outside of your hi-fi room, you cannot tell me that any of these oversized boxes of unnecessary consumerist clutter, whoever they are by, will get played more than a handful of times in their entirety. I should know, I've a few of them myself. As for reissues rather than previously unreleased archive material, the cynical ploy by record companies of getting us fools to buy the same album over and over again through the years only proves that we are as gullible as they think we are.

The biggest problem is that the majority of the prog buying audience, and let's not beat about the bush here, the sexagenarian bands themselves and a lot of the folk who scribble about them and the scene in general, are a conservative bunch. Capitalism being what capitalism is, it is inevitiable that record companies, and it now it seems cruise companies as well, will go after their nostalgia-fixated buck with gusto. It does worry me that the many decent young (and not so young) bands out there trying to do something different and away from the anodyne rock mainstream will struggle to survive as a result, as will the progressive rock scene they are pluckily trying to keep from drowning in a sea of middle class complacency, at least partly of its own making.
...

On an entirely different note, you've got to love that contrary old bugger Neil Young. No, you do, really. For ages now he's been raising mega bucks to put behind his new all-singing-all-dancing high end digital streaming system Pono, which aims to put mp3 back in the hole in the ground it came from. For those of you who know about these things, it offers "24-bit 192khz sound". Suffice to say, it will sound a whole lot better than 320kpbs mp3, the 21st century equivalent of a wavering transistor radio.

Then, right in the middle of the headlong promotional charge for Pono he releases an album of folk covers recorded in a near 70 year old "Voice-O-Graph" booth, of the kind once seen in fairgrounds, where kids could record and take home their very own vinyl record. This machine produces sound about as lo-fi as it gets, and here's some proof...

I must admit, the crackles and pops fit this particular song, the film of which was projected during last December's Bert Jansch tribute evening at London's Royal Festival Hall, and proved to be one of the evening's more poignant moments.