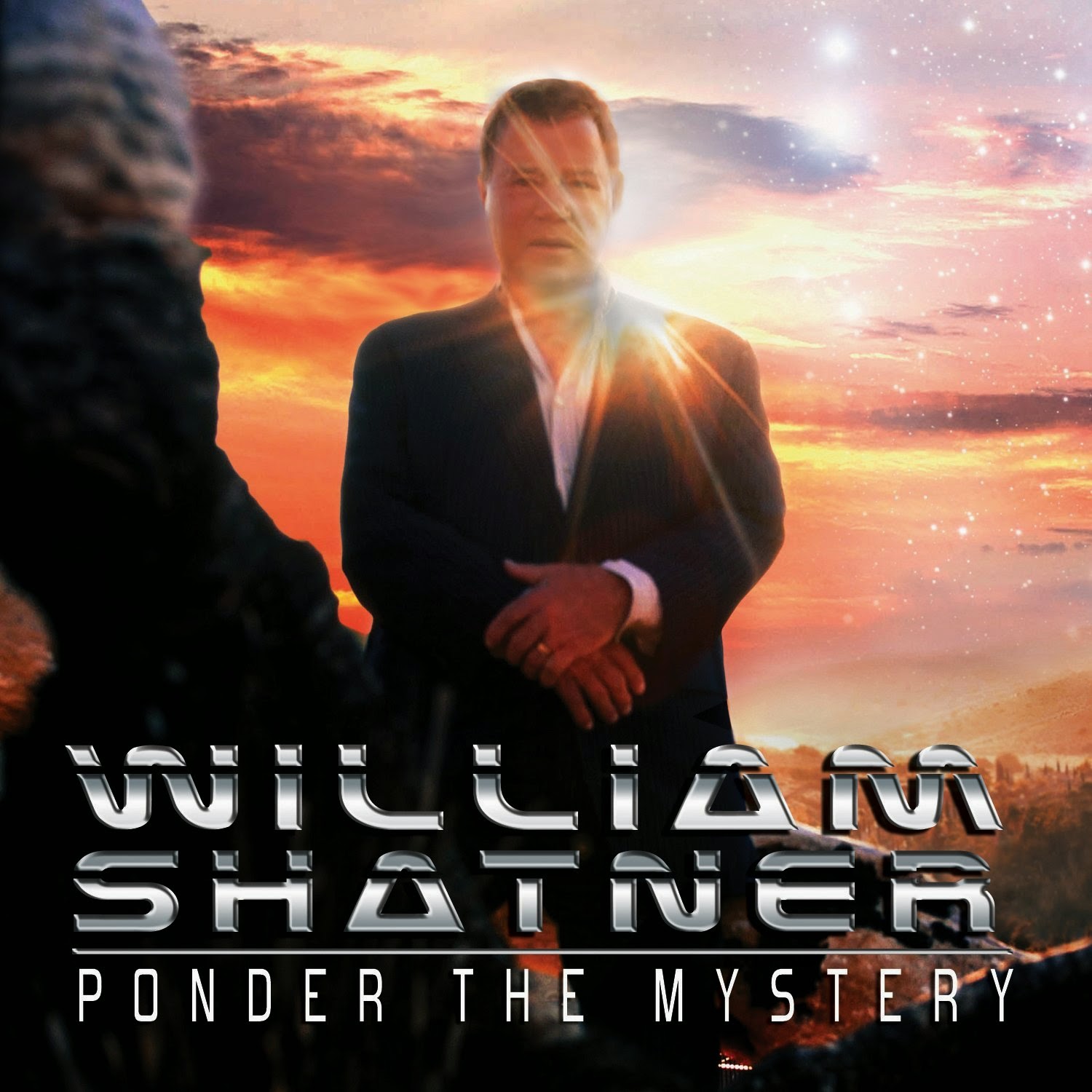 William Shatner is a man who has been around for my entire life; well, my TV watching life at any rate, as our house did not own a telly prior to the 1969 Moon landing, and lo, there was Bill. Not landing on the Moon you understand, although that would have been somewhat appropriate.

I'll call him Bill, as his strange acting style is part of the furniture and as familiar and as inflexible and unyielding as that massive polished oak dresser sitting in the corner of the room. Not particularly aesthetically pleasing, all the same you cannot bear to part with it, it is a family heirloom after all. The wooden monolith has taken more than a few knocks over the years, but they seem to have been absorbed into its highly polished sheen, and it carries on, unphased...

You may wonder what Zoot Horn Rollo, Mick Jones (the Foreigner one), Simon House, Steve Vai, Al DiMeola, Rick Wakeman, Joel Vandroogenbroeck (the man behind Swiss Krautrockers Brainticket), Edgar Winter, Nik Turner, Vince Gill (country music star), Edgar Froese, Robby Krieger, Dave Koz (smooth jazzer), and George Duke have in common? They all contribute to William Shatner's 2013 ersatz prog rock opus Ponder The Mystery. It would be tempting to say they are the "One Who Is Many", but I risk being phasered down by frenzied screams of "WRONG ERA!!" from the numerous sad uber-nerds who like dressing up as Klingons and going to comic conventions.

You will probably know of Bill's previous forays into what might loosely be described as music. Over the years he has treated us with his let's say, individualistic takes on such classics as Tambourine Man, Lucy In The Sky With Diamonds, and the so excruciating it's truly wonderful Rocket Man, and many others. These are not interpretations one can forget in a hurry, much as you might want to. Bill has put several pop classics through his portentous thespian mangle in a career that has seen him release a remarkable 4 studio "music" albums, beginning with 1968's Transformed Man, which included both Tambourine Man and Lucy In The Sky With Diamonds, and ending (so far) with this slab of inter-galactic whimsy. Ponder The Mystery is actually his third album in ten years, a late burst of activity for this octogenarian.

The music was written, produced and played by the ubiquitous Billy Sherwood, who seems to appear on just about every lower league American prog release these days. The "One Who Is Many"...soz, but it's too good not to use...contribute their individual solos to most tracks. I do not have a CD, only a review download, but it is fairly easy to spot where some of the guests make their appearances nonetheless.

Sherwood's music, especially when he multi-tracks his vocals, comes over in places as chicken-in-a-basket Yes, livened up by those guest solos. In no way is this progressive, and it only just ventures into prog territory. "Prog-lite" or "FM-prog" if you will, and quite forgettable. The guitar solo at the end of So Am I, which I guess might be Steve Vai* is the musical highlight of the record.

Of course, what we really want to know about is Bill's performance. Ponder The Mystery is a concept album, loosely bound around the subject of...err..pondering the great imponderables, the protagonist musing on aging and his place in the grand scheme of things, all as the sun sets slowly over the sea. Sounding in places as if it was phoned in from an alternate universe, Bill's unusual way with ENUNciation, putting emPHASES in a lot OF the wrong places is present and CORRECT. Brit readers will recognise that BBC journalist Robert PESton must either be related or went to the same stage school!

There is unintentional humour to be had here, Bill's strange inflections on Where It's Gone...I Don't Know brings a smile, as he muses "Where's the love, and what am I doing?" Well, if you don't know Bill, I sure have no clue whatsoever. With the exception of some actually rather clever wordplay on Rhythm Of The Night, unfortunately of a lot Bill's poems or lyrics are a bit dull, which only seems to confirm that this was actually meant to be taken seriously. It would have been far better and more enjoyable had he played it for laughs.


The title track meanders along to little effect, as does the rest of the album. The pace is fairly constant, at just above slothful, and a lot of the tracks are roughly the same length, which doesn't help the dynamics, and proceedings only get a bit more lively when a guest solo spot is inserted. Fair play to him, as Bill has actually performed this album live, backed by Billy's group Circa, and one wonders how all the solo sections were replicated.

In recent interviews Bill claims to have loved the original prog bands but when pressed can't recall any band names. Hmmm...but he did teach his daughter to ride her horse in a "progressive rock way". The mind boggles! Bill's most recent appearance on UK TV was as a guest presenter on long-running satire show Have I Got News For You, a performance that was far more off the wall and therefore fun, than this rather prosaic and plodding affair.

One wonders who is actually going to buy this...oh, hang on, there appear to be hordes of forty-something blokes dressed as Klingons heading in my direction shouting in what appears to be a guttural variant of Serbo-Croat. I'll bet their mums are glad to be rid of them for a day. I better get me coat...

Blimey...I managed to get through that without saying "Please beam me up, Scotty", or "It's prog Jim, but not as we know it"... :)