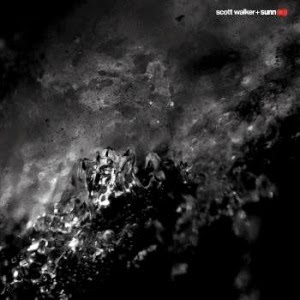 When Sunn O))) turned up at Westpoint Studios in London to record their parts for this collaboration with Scott Walker they brought with them so much amplification it would not all fit in the studio. Along with Sunn O)))'s motto "Maximum Volume Yields Maximum Results" which turns up on the back of the Soused CD cover you would be forgiven for thinking they are forboding portents of the album's contents, but actually you would be wrong. Soused, while drenched, nay, soused in sound is not the kind of full-on aural assault you might expect from Sunn O))), nor is it the wilfully difficult music-as-art-terrorism so beloved of Scott Walker of late.

Soused carries with it a weight so heavy that one expects the thing to buckle under at any point, only Sisyphus just keeps on pushing, never defeated. The massed guitars of Sunn O))) fed through all manner of trickery boxes create dark industrial drones and screaming backgrounds for Scott to invent the melody as he goes along.

Brando leaps out of the speakers from the get-go fully formed as if one had turned it on halfway in. "A beating would do me a world of good" croons Scott in character, for Brando is a tale of the monosyllabic actor's perceived flirtations with masochism underlined by the cracking of bull whips. Tos Nieuwenhuizen's angry whipcrack guitar figure is a prominent repeated feature as the first half of the song sees Scott transmit rising angst, his voice nearly cracking, too. The song ends on Sunn O)))'s drawn out drone, a device that will occur elsewhere on the album.

The tone has been set, and Sunn O)))'s monolithic fearsome noise played with the grim determination of infinitesimally creeping tectonic plates digs into your very core on Herod 2014, their menacing and barely changing low-end rumbles topped off with the piercing tortured seagull screams of (presumably) Tos' guitar while a moaning elephantine sound lumbers around.

Add to that the soon-to-be background noise that introduces the song sounding like the amplified heartbeat of a baby in the womb, and we are in familiar Scott territory, enhanced by some visceral and physical lyrics referencing disease, infestation and cigar ash. "The nurseries and creches are heaving with lush lice", another line amongst many over which imaginary therapists fight one another to use in dissertations.

The nightmare soundtrack grows until it is joined by an industrial hoover from Andromeda, sucking your brains inside out as the ante is upped with a now repeated four-note monstrously huge low-end guitar line, and later a reprise of the fragile feminine bell that introduced the song now transformed into an agonised distorted pealing. The pace never changes, and maximum volume does indeed garner maximum effect, as Scott mournfully sings in that distinctive baritone "she's hidden her babies away"...

Ah...the lyrics. No analysis of a Scott Walker album would be complete without at least attempting to describe the current literary obsessions of this most iconoclastic of writers. In actual fact the lyrics are less impenetrable than on Bish Bosch, and so a literary dissection is not necessary. For all that they remain flying around the listener in an esoteric orbit that bears comparison with no other lyric writer today.

Bull has sections that sound almost like a conventional rock song, but anchored by the crushing gravity of Jupiter - it is one damned heavy muvva. Here amongst the oblique lyric, repeating the phrase "Bump the beaky" we have examples of Scott's black humour; "Woke nailed to the cross. Could not give a toss", and "The leapin' - like a River Dancer's nuts". This song also includes the repeated phrase "Custodiunt migremus", which is Latin for custodial agreement. I have yet to unravel this dark treatise, and it may even be Scott's little joke - perhaps the clue is in the title? As if to confound earlier expectations of "rock" music, the longest drawn out drone of all plays out the ending of Bull for what seems like an eternity.

Fetish opens with avant-garde metallic shards of atonal sound, and is probably the closest track thematically to Bish Bosch. Peter Walsh is the star here, and the longtime sound terrorist partner to Scott's bloody and bodily lyricsmithery gets free range with all the dark effects he can muster, including a deranged crowing cockerel, before Sunn O))) return with another crushing blow of an Ur-riff. All highly unsettling, Scott intones blood'n'guts and catharsis by physical exorcism, as he "carves the ghost mascot the length of his skin".

Lullaby sees Scott chisel out his own version of a song written for musical polymath and modern day Dietrich Ute Lemper, one that appeared as a bonus track on the Japanese edition of her 2000 album Punishing Kiss, but was probably more widely known from its appearance on the only Scott compilation that matters, 5 Easy Pieces. It is an interesting departure from the original, with Sunn O)))'s menacing one note backdrop and some lonely synth strings replacing the initially sparse and latterly cinematic sound of the original with its swaying orchestral arrangement and dramatic intent. Both versions work in their own contexts. For what it's worth I prefer the Lemper version.

Scott intoning "The most intimate personal choices and requests central to your personal dignity will be sung" indicates that the song may be referring to assisted suicide as apparently confirmed in interviews by Lemper at the time - I have not found proof of that, but it fits. So, here we have a lyric possibly about assisted suicide, with added night-terror, juxtaposed with a chorus from William Byrd's innocuous poem My Sweet Little Darling to the backing of high-pitched synth screaming - would you expect anything else?

The much anticipated collaboration between these two utterly wilful but also utterly different groupings of musical visionaries is an undoubted success. Sunn O)))'s Greg Anderson and Stephen O'Malley have added heavy layers and a sense of infinite weight to the production of music-as-high-art espoused by Scott Walker and Peter Walsh, all to great effect. Soused is probably the most accessible collection of music to have come out of either participant's stable in the 21st century, but have no fear, you can't dance to it, and neither is it an easy listen.

Soused is not an album to be dipped in and out of. An album in the proper, if unfortunately old fashioned sense, it requires your concentration for 48 minutes, you are not permitted to wander. It demands "You will sit down and listen to me whole, or not at all". You cannot argue with it, for that would be pointless. Five tracks of roughly equal length and pace make for a hypnotic and totally immersive experience. Walker describes being in the centre of the sonic maelstrom as "like entering a furnace...a furnace of sound", where "you can feel it right up through your knees".

Turn the lights out and jump in!