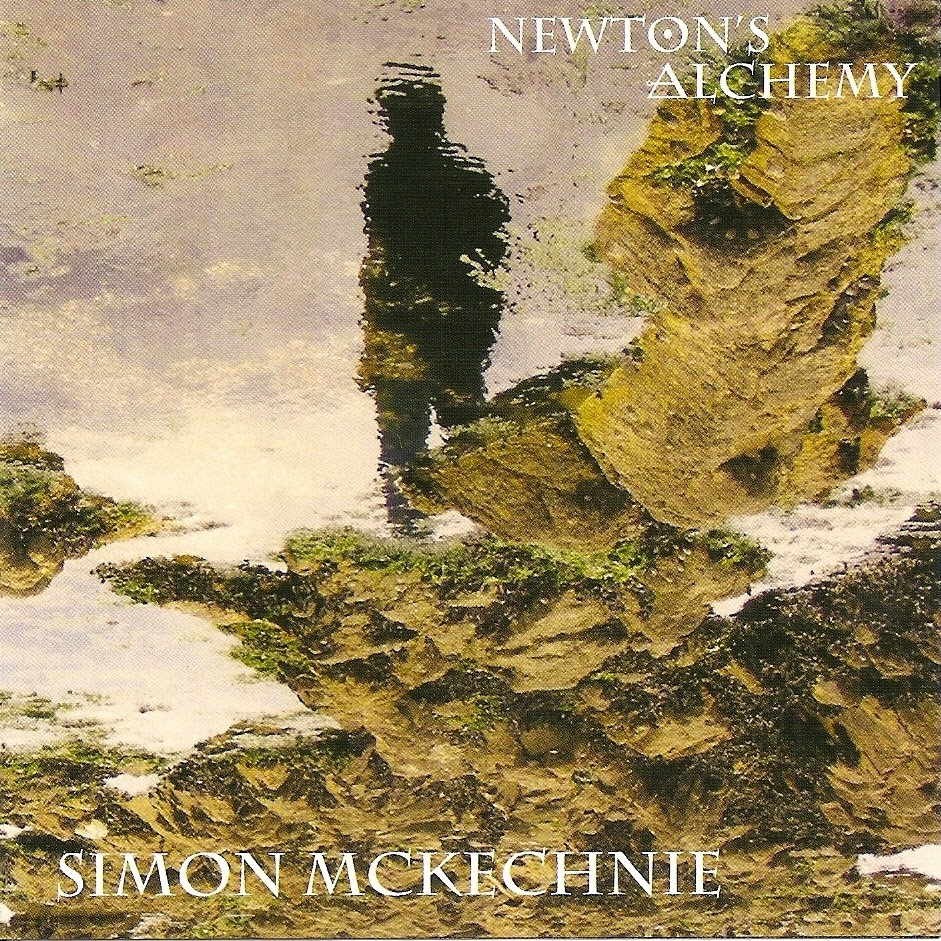 Just over a year ago I reviewed Simon McKechnie's second album Clocks and Dark Clouds. A highly intricate work recorded under the most difficult of circumstances, it is with some relief that I can report that Simon is well on the way to recovery from his long-running health problems, and that the recording of third album Newton's Alchemy took place under far more "normal" conditions, although Simon did have to take many breaks during the recording process. Clocks... arose from a series of improvised musical sketches that Simon recorded mostly while flat out on his back, not that you'd guess, for the end result was surprisingly cohesive given the circumstances. Newton's Alchemy on the other hand is a through-composed piece, written as one piece of music, and therefore it evolves more organically as a consequence.

Simon retains his fascination with mathematics, and Albert Einstein, the inspiration for Clocks... is here replaced by the father of modern mathematics, one Isaac Newton. Newton's Alchemy as the title suggests, is based around the Renaissance Man's other obsession, the transformation of elements, or alchemy to you and me. In common with many scientists of his era, Newton's quest for knowledge led down the path of the possibility, later debunked, of changing one base element into another. The Age of Reason idea that everything is connected to everything else is not that far removed from modern dark matter theory, and Newton was not after gold, but was attempting to unravel the deeper mysteries of existence in a thoroughly modernistic fashion with the tools at his disposal.

The lyrics include direct quotes from Newton's notes, and from his translations of the Emerald Tablet, also included in the CD booklet. The Emerald Tablet was an ancient text said to contain the secret of transmutation, a Bible for alchemists. Newton's translations and musings are linked by Simon's own weighty words, and it is all set to music that while split into separate tracks forms a developing whole in the grand prog sense.

Simon plays all the guitars, keyboards, the bass, and does all the singing, and the drums and percussion are supplied by Adam Riley. Extra textures are given by early music specialist Clare Salaman and flute expert Jan Hendrickse. The music is never bombastic, but certainly complex. There is a lightness of touch that perfectly compliments the at first glance impenetrable lyrics, which are all on Simon's website if you are curious.

Simon's voice is well suited to the mysterious subject matter as it has the otherworldly quality of a wizard casting spells. The guitar is Simon's instrument, and he plays everything from acoustic, through classically tinged plucking, ending up with spiky almost avant electric web weaving. This is the kind of eclectic prog that ticks a fair few boxes for me, and it is thankfully cliché free.

This is not an album you will be singing along to in the shower, but anyone into complex music that requires a bit of concentration, which probably means you will not be able to absorb it in one sitting, music that on the other hand is in no way inaccessible, should find plenty to enjoy here. This is definitely an album for prog fans, and one that lends itself well to a long session with the headphones accompanied by a good single malt and the lyric pdf on the laptop. Actually, you don't need the headphones, for my personal "racket barometer" aka my better half has not commented at all!

Simon McKechnie is a talented guy who deserves more exposure, and I recommend Newton's Alchemy to those who like me are always on the look out for something a tad different.