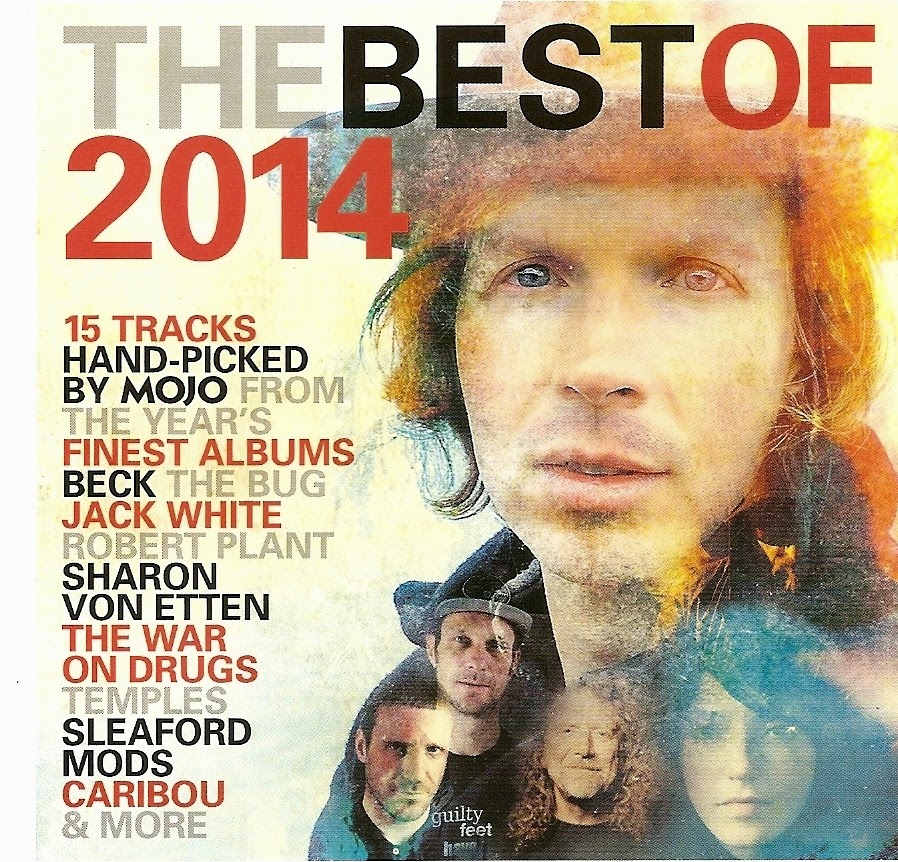 It's that time of year again when the "Best Of" lists start coming out. In order to give any band daft enough to release an album in December a chance, I always hold off until the Xmas holiday, but MOJO are there already with their picks of the year on January's cover CD.


Why do mags release issues in one month and call them by the month after next? Anyway...most of these are new to me, and here are my opinings:

1. Beck - Blue Moon (from Morning Phase, MOJO#1 album of 2014)
A typically lush and downbeat anthem from Beck's wonderful rise'n'shine album Morning Phase, which MOJO have as their album of the year. Do I agree? That would be letting the cat stick a tentative paw out of the bag now, wouldn't it?

2. Jack White - Lazaretto (Lazaretto/#4)
I quite like Jack White, the guy has a way with a choon and a dirty geetar. This noisy charge through White's garage rock workshop is enjoyable enough, and will certainly shake the dust off your shelves.

3. Robert Plant - Turn It Up (Lullaby And...The Ceaseless Roar/#19)
Percy's world music and rock'n'roll mash-up gets ever more eclectic. I might buy this album.

4. Sharon Von Etten - Nothing Will Change (Are We There/#11)
The first name new to me, this cathartic soul-bearing wouldn't have sounded out of place on Beck's album. Nice.

5. Temples - Keep In The Dark (Sun Structures/#32)
They do glam rock too, apparently. OK, but a bit tame. Goldfrapp does this kind of thing better.

6. Ty Segall - The Faker (Manipulator/#13)
Another 70s stompathon with freakbeat tendencies. If you had never heard this kind of thing before it would get you jumping like like a loon.

7. Steve Gunn - Milly's Garden (Way Out Weather/#6)
My first boss was called Steve Gunn, and our cat's sister that lives two doors down is called Milly. Actually, this is rather good - more wistful singer-songwriter stuff, from a guy who reinvented himself in a plaid shirt, for he was once an avant-guitarist, apparently. A bit Steve Earle-ish.

8. Sturgill Simpson - Turtles All The Way Down (Metamodern Sounds In Country Music/#15)
As far as I can make out, that mouthful of an album title translates as trad Nashville with a bit of sampling chucked in. Pass

9. Julie Byrne - Holiday (Rooms With Walls And Windows/#7)
Yep, singer-songwriters seem to have been this year's thang, at least as far as MOJO are concerned. You can imagine what this sounds like from the album title I'm sure, and it does. Gossamer-light and quite lovely.

10. The War On Drugs - Under The Pressure (Lost In The Dream/#2)
Ah...a band I've heard of at last...
Definitely the hipster group of choice at the moment, I struggle to see the appeal of this band with the wettest name imaginable. Listen to this and tell me it's not one of The Waterboys' lesser moments. It's a nice tune, but way too earnest and probably twice as long as it needed to be...does that make it prog?

11. Kasai Allstars - Yange, The Evil Leopard (Beware The Fetish/#29)
The only non-Western record in MOJO's top 50, this Kinshasa band play some nice Afrobeat, all hip-shaking rhythms and liquid guitar runs. This sort of music is timeless, and a nice change from the shedloads of angst elsewhere on this CD.

13. Caribou - Your Love Will Set You Free (Our Love/#12)
Mildly interesting electronica from Canadian Dan Snaith that doesn't live up to the Pseud's Corner hyperbole the mag lays on with a trowel.

14. Sleaford Mods - I Keep Out Of It (Divide And Exit/#3)
Described as "grot-hop", this Nottingham duo sound like the kind of fellas you'd cross the street to avoid. They look like it too. If I was 16 I'd love this. I'm not and I don't. Seems I've turned into my dad...

15. The Bug (Feat. Flowdan) - Dirty (Angels & Devils/#10)
Now this is how you do attitude. Dystopian rapping ain't my thing at all, but I can see where it's coming from. Makes Sleaford Mods sound like 14 year-old football hooligans, which is probably what they once were.