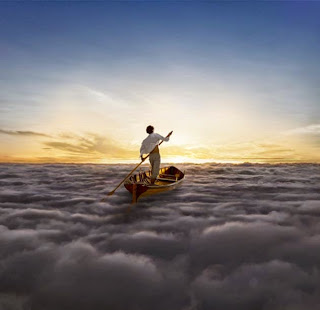 As this piece is only partly a discourse on the merits or otherwise of Pink Floyd's "new" waxing Endless River, I have avoided the usual "Band - Album Title" header.

Firstly, I have always been of the opinion that Pink Floyd were a) not a prog band as such, and b) stopped developing after Dark Side... came out. The Syd era will not be discussed here, it's another group effectively, anyway.

They tried being prog; the studio album of Ummagumma while it has its moments is largely forgettable, although it did give us one of the best track titles ever...you know what that is, I'm sure! Probably their most "prog" piece, Atom Heart Mother, was ok, but it cannot hold a candle to its peers of that era. Before you ask, Echoes is an enjoyable hark back to their own take on post-Syd space rock, and not prog in the slightest. Now, there is nothing wrong with not being prog, in fact many would say that's a bonus - me included, sometimes!

The post-Syd band peaked with Dark Side Of The Moon, which was an utterly brilliant piece of very English classic rock, and will always be regarded as one of the best rock albums by anyone, ever. If you disagree, you are simply wrong, and reading the wrong page. After that, Wish You Were Here was a good if not great album, and the start of their long march into moroseness courtesy of Roger Waters, who then and subsequently used the band as a vehicle to exorcise his sour demons. Animals was one-paced, self-indulgent and frankly dull, and as Andy Gill in The Independent rightly put it in his review of Endless River, made Floyd one of the reasons punk had to happen. As for The Wall, well by then Waters was telling us in practically every song how the mental scars from being buggered behind the bike sheds of his minor public school were still haunting him...well, not quite, but it's bloody grim. The best song by several country miles on that acerbic and self-absorbed double album was not written by Waters, let's leave it at that. Around this time, Waters was falling out big time with Dave Gilmour and more so with Rick Wright, who quit in exasperation at Waters' demanding attitude, or so one of several versions of the story has it. Not only did the autocratic Waters effectively sack Wright in all but name, but he had the temerity to re-employ him to play it live, the cad! As for The Final Cut, there is no involvement from Rick who may at least have leavened its Slough of Despond with some soothing keyboard atmospherics. A thoroughly dreadful album, and a full stop on the most commercially successful era of the band.

Endless River is culled from The Division Bell sessions, an album released in 1994, seven years after a Waters-less and Wright-less "Pink Floyd" reformed for the rather poor A Momentary Lapse Of Reason album. The Division Bell was by far the better of the two, as Rick Wright and his trademark atmospherics and piano flourishes were back in the fold. Stylistically, the trio had settled on a comfortable MOR rock sound, instantly identifiable as Floyd by Gilmour's iconic guitar tone. The album passed me by to be honest, as by then Floyd were hardly relevant. One reviewer called it "a glib, vacuous cipher" of an album, which is well over the top, but it certainly wasn't blazing any trails and sounds like the musical equivalent of wearing slippers and putting your feet up. Listening to it now, apart from High Hopes it is indeed somewhat soporific, but then post-Syd they always were to a degree, that was part of their charm.

All of which brings us neatly on to Endless River. As Gilmour and Nick Mason - can't really say "the band" with any justification - have pointed out on numerous occasions, this is NOT a Pink Floyd album per sé, but a tribute to their friend and colleague Rick Wright. The album shows that Wright was an integral part of the Pink Floyd experience, and it is a fitting tribute to the mild-mannered keyboard player. The only fully realised song on the record is the concluding Louder Than Words, and, listened to in context, I defy you not to have shivers running down your spine the first time you hear it.

Unfortunately it is by far the best thing on the album. The previous 17 instrumental tracks are pleasant enough, and sound like what they are - works-in-progress polished up for release. A disembodied voice (Wright?) introduces Things Left Unsaid, and we are off an a 52 minute trip through a late middle age dreamworld, to be helped along by your relaxant of choice. It's What We Do is basically a lift from Shine On..., Sum starts "Side 2" according to Spotify, and begins with some great keyboard sounds from Rick. Skins sees Nick Mason get slightly animated, and there's even a track called On Noodle Street, which at least shows they still have their sense of humour. No Floyd album would be complete without some languid sax, and along with some rather nice clarinet (?), that's what we get on Anisina, topped off by a short trademark Gilmour solo. Talkin' Hawkin' features the instantly recognisable voice of Prof. Stephen Hawking, telling us that "mankind's greatest acheivements have come about by hardship", making me smile, as Gilmour and Mason must be two of the most well-heeled musicians on the planet.

I heard Gilmour comment on Jools Holland's Later, in contrast to Mason and his previous caveats, that "there was too much for one album" at the time of Division Bell, but all that does is beg the question that if there was "too much" for the album, implying it was good enough, then why didn't it get finished and released at the time?

One final thought - Gilmour has said in an interview that he thought the reason Endless River topped the Amazon pre-order charts was down to younger listeners being discontented with the uniform blandness of modern mainstream music. Well, you can't get much more mainstream in the rock world than Pink Floyd, Dave, and no, it topped those charts because it was pre-ordered by thousands of (mostly) blokes my age hitting "Buy Now", people who lost interest in mainstream pop, if they ever had it, 40-odd years ago. These folk are now part of a very conservative demographic who will readily open their wallets for the latest rock nostalgia-fest, while truly impressive, cutting edge music, be it prog or not, struggles for an audience.

I do not begrudge the existence of Endless River, for it is a fitting and dignified tribute to Rick Wright's contribution to an, if I may employ an over-used adjective in its proper context, iconic British rock band. As that has been stated by Gilmour and Wright as its raison d'etre, one hopefully assumes that Wright's family will profit from the lion's share of the royalties, and so they should.

All that said, I won't be buying it for there are far more worthy musical causes deserving of my support, and the band will not miss my £15 anyway.