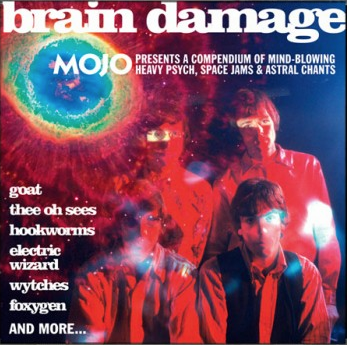 Yep, it's another keeper in the MOJO cover CD series. It is no surprise that one of the best tracks on this compilation is a cover of a classic from the original psychedelic era. Having said that their are some other corkers on here too. Celebrating modern psych-rock in all its many guises, Brain Damage is the kind of glorious racket that can really only be played LOUD.

The psychedelic classic I refer to is Interstellar Overdrive, which, along with Astronomy Domine started the British version of acid rock in 1966. The tracks that make up Brain Damage all share some degree of inspiration from the freedom expressed in Syd's formative forays into lysergically propelled acid-rock expression.

Everyone knows the story behind Syd's primal descending riff that bookends Interstellar Overdrive, surely? No? OK then - Floyd's manager had an earworm going through his head, but he couldn't remember the title. So, he hummed the riff as he semi-remembered it to Syd who then played it back on his guitar. Liking it so much, Syd used it in what would become Interstellar Overdrive. The tune Peter Jenner was trying to remember was Love's Little Red Book, itself a cover of a Bacharach/David composition, from the band's 1966 debut album. As Roger Waters noticed at the time, Interstellar Overdrive also bears a fleeting resemblance to the theme from Brit sitcom Steptoe & Son, a coincidence that points to the impish humour so often seen in Syd's work.

1. The Coffin Daggers - Interstellar Overdrive
If this band were my age, they'd no doubt be called The Coffin Dodgers.

It's hard to get this one wrong, and they don't. Even the lysergic breakdown in the middle is right on the button. This is taken from their 2002 debut album, which apparently is a mix of damaged originals and all sorts of interesting covers - might be worth checking out. A great start to this collection!

2. Pontiak - Ghosts
A pleasing and rumbustious mix of stoner rock and 13th Floor Elevators acid-infused pop hooks from this American band, named after their hometown in Virginia.

3. Anthroprophh - Crow With Sore Throat
Pere Ubu on baaad acid, speeding toward the centre of the Sun. It's great!

4. Foxygen - Star Power II: Star Power Nite
This band are currently so hip it hurts. As a result they may well be the first band on this CD that you've heard of. Had Jack White been brought up on a diet of 60s garage psych music, White Stripes might have sounded like this. They probably would have tackled this simplistic mess of a tune in a far more appealing manner, too.

5. The Wytches - Digsaw
Ah...now this is more like it. The singer changes from wild-eyed high register incantation in the verses to Black Francis throat shredding on the chorus where the band rock out in fine punk-psych style. It will get your toes twitching. They're from Peterborough, of all places. What with Kettering's Temples is there an East of England new psych scene in the offing? No, for this lot sensibly decamped to Brighton.

6. Goat - Gathering Of Ancient Tribes
The second helping here from Rocket Recordings comes from these charmingly bonkers masked Swedes, whose live appearances are something of an event. Mixing classic fuzzed overdriven guitar with mantra-like rhythm sections, and shamanic twin lead vocalists, the band also dabble in world music influences, making for a heady mix. Undoubtedly much better in a live setting, this is still a blast. This short video, awful sound quality aside, will give you an idea...

7. Dead Skeletons -Dead Mantra
They're not wrong, and dead good it is too, as motorik rhythms meet post-punk doom laden guitar. From Reykjavik, you would therefore expect nothing less than slightly odd. The "look at me, aren't I clever" hyperbole in MOJO's preamble made me smile, for apparently they "conjure up the brilliant sound image of Goethe's Der König in Thule brought to the stage by Television, live at CBGB's in 1977". Not having a degree in German literature, I had to look that up!

8. Gnod - Visions Of Load
A sinister but low key and single note guitar riff, which is a millimetre away from being a direct lift from The Stooges 1969 forms the basis of this eight-and-a-half minute long spacerock excursion. Another one that probably works far better in a live setting.

9. Hookworms - On Leaving
Great band name! And a decent tune too, another repetitive riffer with that ubiquitous Farfisa-like organ sound. Builds up nicely to some frantic single note guitar squalling, as indeed it damn well should. MOJO describes them as "too young to have seen Spacemen 3 or Loop live", which made me feel quite old.

10. Hills - Master Sleeps
Third bag of goodies from psychrock sweetshop Rocket Recordings, who are cornering the market in garage psych it seems. Some gloriously dirty but languid fuzz guitar and some blissed out vocalising does not take this nine-minute non-tune out of the garage, but instead locks it in and buries it in the inspection pit where it writhes around in a lackadaisical fashion for many minutes before entering an altered state and slowly dying out.

11. Lay Llamas - We Are You
Second band on here you may have heard of, and yet another on thee olde Rocket Recordings. Actually, I've no idea why you might of heard of this band, but I have! Hailing from Sicily, this duo show the similarly constituted Foxygen how two people should make psych-pop. This tune is a beguiling mix of hypnotic mid-period Can and Europop. Nice!

12. White Manna - Acid Head
You can probably guess what this sounds like. It does, too, all acid-fried guitar and thunderous bass turnarounds, this Californian band freely admit to ingesting psychedelics for musical inspiration. Julian Cope will see things in here I can't, but I like it all the same.

13. Thee Oh Sees - Penetrating Eye (Feat. Chris Woodhouse)
I was wondering if there would be a band on here spelling the indefinite article with an extra "e". The best song title on the compilation is somewhat spoiled by the "Feat." addendum. Taken from the band's eighth (!) album, this sees a return to the inspiration behind this fine compilation, banged out with a devil-may-care panache.

14. Electric Wizard - Sadiowitch
Actually, take that last one back; this is the best song title on here. They also have the best label name - Spinefarm Records - marvellous! I have heard of Electric Wizard, too. Ending the CD in fine fashion, this is a shapeshifting beast of a riffmonster from dirty acid hell, blasting away the wasted synapses of the free festival crowd like Black Sabbath leading a tripping Panzer division through Hades. As the blurb says "Electric "Fucking" Wizard are back!" The fact they are from Dorset rather spoils that image...then again, Dorset is where one Julian Cope resides! ;)
at November 08, 2014