Seven Impale - City Of The Sun 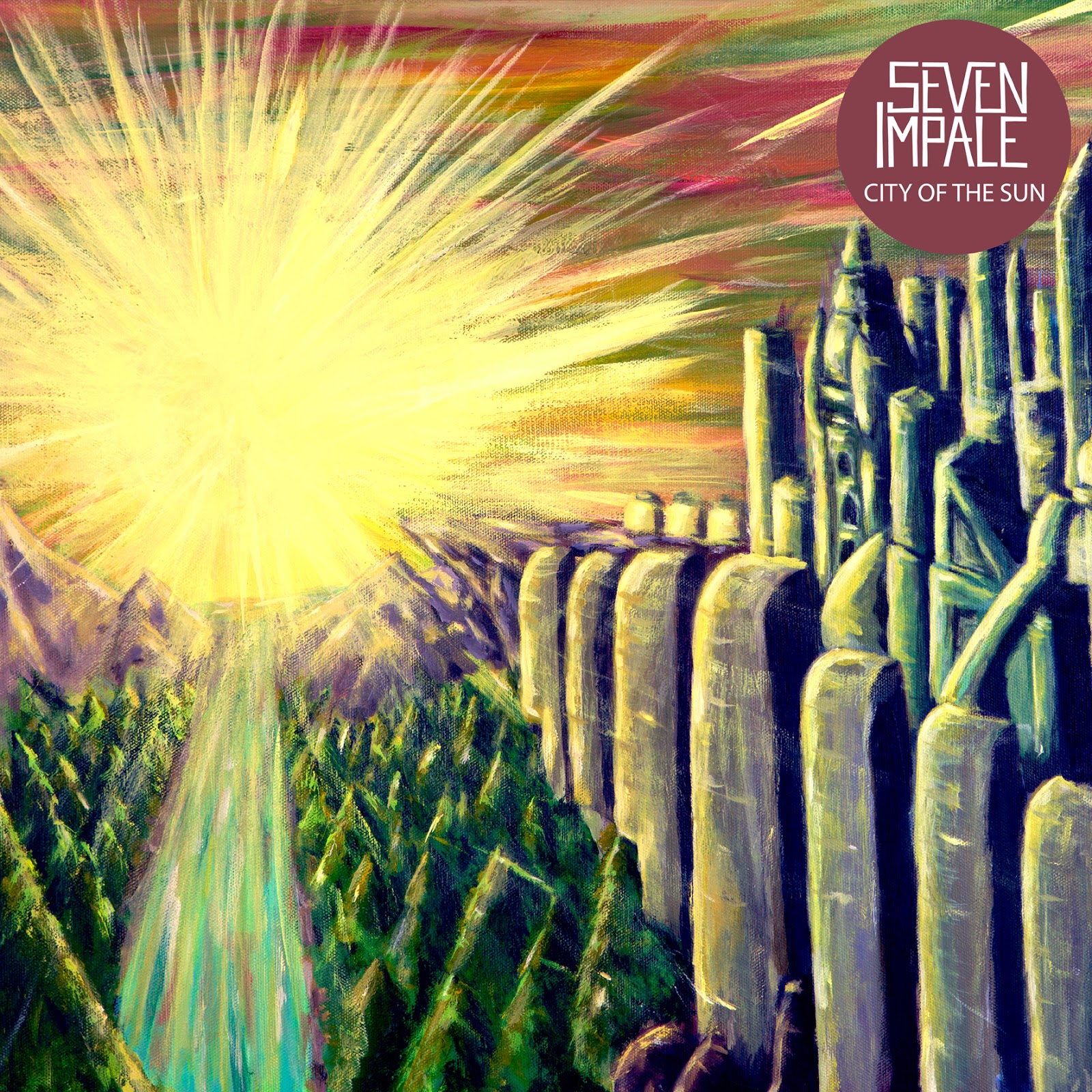 It seems I have followed the careers of Norwegian proggers Seven Impale on this blog since the beginning, reviewing their debut EP Beginning/Relieve back in March 2013, and following that up with an interview. This was not planned, it just panned out that way, so rather than write this review on TPA or DPRP, for the sake of continuity, I shall wibble on and on and then a bit more, right here.

Well here they are then with their first full length album City Of The Sun, and they seem to be coming along quite nicely, albeit a tad in thrall to their influences, particularly on opener Oh My Gravity! which runs the gamut of VdGG and the mighty Crim, the latter even down to a take on the stop and start section of 21st Century Schizoid Man in the middle of the song. It's still a fun ride though, and the boys in the band show they are getting rather skilled in the arrangement department, contrasting a repeated gentle guitar run with Tormod Fosso's growling bass. The latter will become a feature of the album, popping up now and again to rattle the collective cage. Charging from a quiet start to a furious denouement, Oh, My Gravity! ticks all the heavy prog boxes, and although it is obvious which records these guys have been listening to, they inject armfuls of youthful enthusiasm to drag it out of the museum and into the 21st century street, kicking and screaming. Playing out on the reprised hypnotic understated guitar run from earlier, the song is something of an emphatic statement. We are impaled.

For all that, I much prefer it when they run with their jazz instincts, as on second song Wind Shears, containing as it does some great interplay between the guitar of Erlend Vottvik Olsen and the saxophone of Benjamin Mekki Widerøe. The song builds to a jazz-symphonic bombastic conclusion, of a style that is beginning to sound their own.

This nascent individuality continues into the initially deceptively calm Eschaton Horo which opens the gates of Hades to reveal a scorched earth VdGG-styled angular and angry blast right out of Still Life before descending further into the abyss on the back of a neo-RIO segment, then returning to the lounge jazz song of the start. Again, there is enough in here to make one forget the obvious influences after a while, and this song shows undoubted promise.

The dirty and grungy bass of at the start of Extraction develops into a meeting between between the heaviest of jazz-prog, grunge, and freakrock. The declamatory and dramatic vocals wouldn't sound out of place on a metal album, but there is no grunting, thank your deity of choice. This tune changes tack more often than a straggler in the Fastnet yacht race, and I think maybe it is trying just a little too hard to impress. One thing this band are not short of is ideas!

The album ends with the full-blown epic, the daftly titled God Left Us for a Black-Dressed Woman a song that builds slowly and purposefully, Håkon Vinje's atmospheric keyboard effects to the fore. The sudden interjection of a few seconds of Jannick Top-like gnarly fuzz bass hints at what is to come. This time singer Stian Økland leaves the bombast at the door, and his vocals are all the better for it. Much syncopation between guitar and sax interweave with subtle percussion led sections as the tune reaches a furiously swaying bridge, blown about in a blast of some more of that heavy jazz-prog.

In structure this epic is again similar to the first 70s reformed version of VdGG, and it has to be said that Seven Impale have become a whole lot heavier since the Beginning/Relieve EP eighteen or so months ago. It will be interesting to see where they go next.