Well, we have not long returned from a long weekend in "That There London" as it is now henceforth known to us mere yokels, or hicks, if you're on the other side of The Pond. The weekend came after another visit a few days earlier, and taken together we have now attended four events sponsored by the EFG London Jazz Festival in under a week.

This cultural extravaganza started on Tuesday 18th November with a gig by Snarky Puppy at the famous rock venue, the Chalk Farm Roundhouse. The actual raison d'etre of this particular soirée was to meet up with a handful of regulars from Pete's Nice Enough To Eat Facebook page, a place where several stoned hippies (and me) gather together in a cave and groove with...YouTube videos of psych and prog music past and present.

Pete I've met before, but it was great to put faces to "Dave Maximum Darkness", "Arv Lotus", and "Diane Sofer", which could well be her real name! :)
Also, a shout for Toby Mearing, who actually got us all interested in Snarky Puppy in the first place but circumstances conspired to force him to miss the pub meet-up and the gig.

As for the group, well until a few months ago I had never heard of Snarky Puppy, and it's not often that a band you've never heard of can quickly sell out a venue the size of the Roundhouse. Around 3000 mostly 30-somethings amongst whom was a large smattering of bearded hipsters got well into the band, who have been going quite a few years now, and seem to have built their audience through ceaseless gigging. Their music is beat-driven jazz-fusion-lite with world music influences, and while certainly very well played I found it a tad difficult to make a connection. 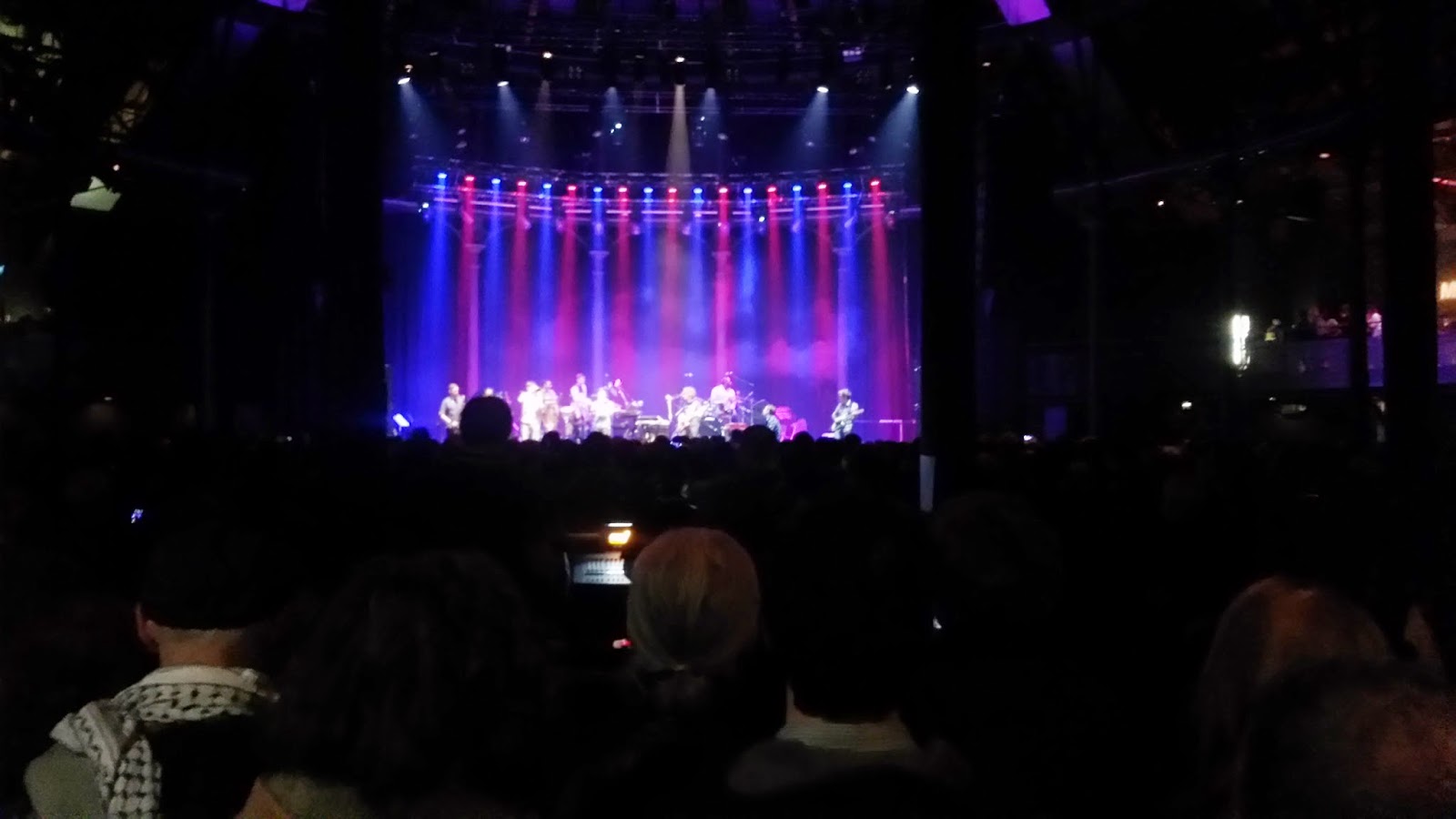 There was even a twenty-minute drum solo, augmented by furious bongo-bashing, the likes of which I thought had ceased to be around 1976. During this overlong percussive interlude one poor chap behind us slipped and fell near the bar, banging his head and passing out, causing much panic among the venue staff. One hipster wag near me said to his mate "maybe the excessively long drum solo made him come over all unnecessary". I hope he was OK...the tumbler, not the hipster.

Much as the music did not do that much for me, it was great evening from a social point of view.

On the Friday, off we went "darn sarth" again, this time for a long weekend with our better halves, as Phil W and I had a gig on that night, and a book launch on the Sunday night. The gig was A Celebration Of Lindsay Cooper, and my full review can be found HERE.

Again the social side of things made an already memorable evening into a special occasion. Phil and I met up with Billy and Martine from Billy Bottle & The Multiple, whose delightful album Unrecorded Beam is certain to make my "Best of 2014" list. Much post-gig nattering initially in the foyer of the Barbican Centre and later at a nearby overpriced yuppie pub by the name of The Jugged Hare meant we did not get back to our hotel until some time well after 1am.

I often consider that some amateur scribblers have far too cosy a relationship with some of the bands they write about, and I rarely go out of my way to meet the objects of my keyboard tappings in order to retain a modicum of objectivity, but in this particular instance I am glad I did, for Martine and Billy are genuinely nice people without a hint of the infamous artistic ego. 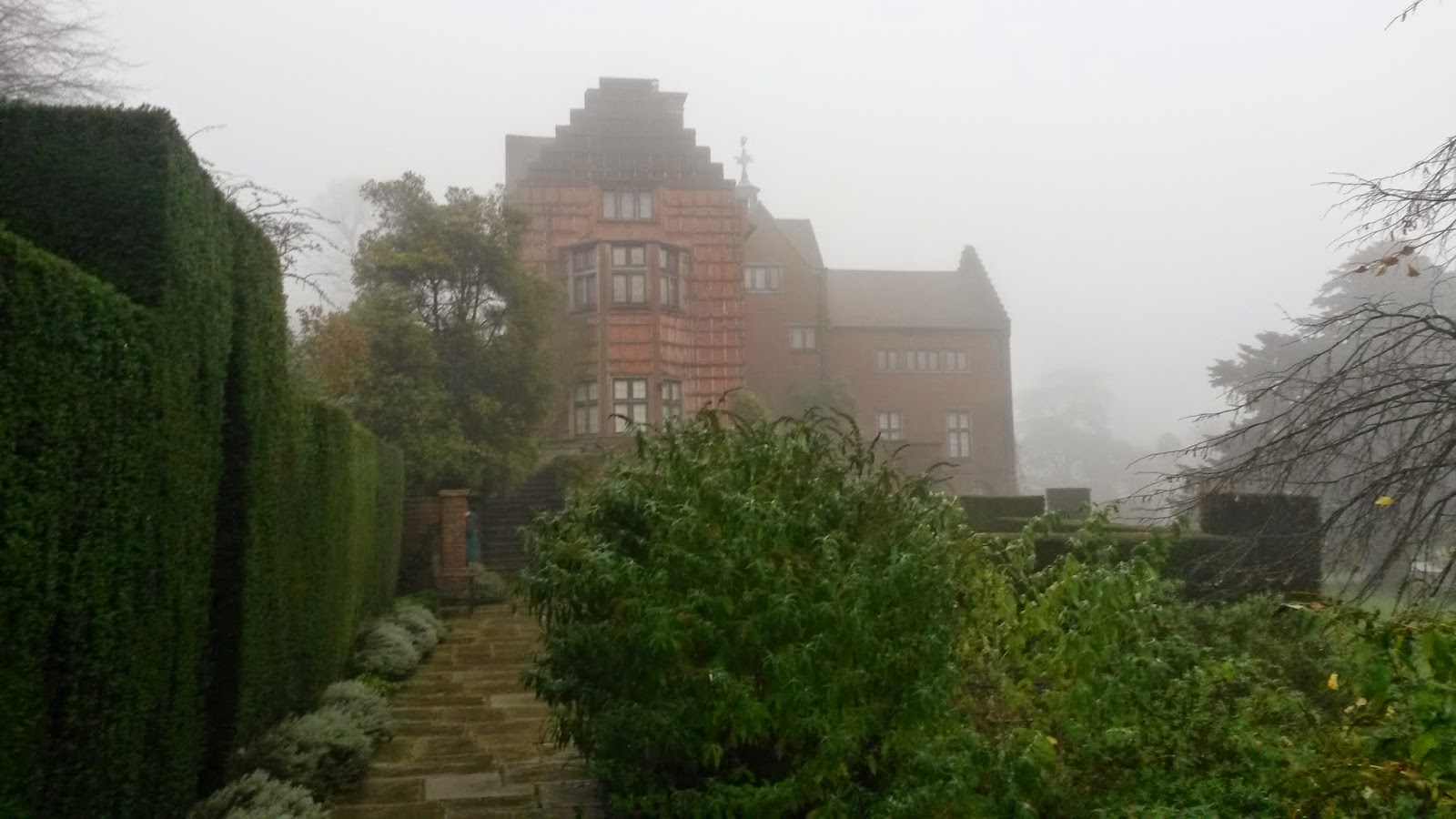 I had a bit of a thick head on the Saturday morning, and Phil and I and our partners spent a rather nice relaxing day at Chartwell, the country house of Winston Churchill. The building looked suitably mysterious and spooky in the unshifting winter murk, as you can see.

A very wet Sunday was sensibly spent under cover in the Science Museum, and after a late afternoon meal, we sauntered on down to the Queen Elizabeth Hall in the Southbank Centre for An Evening With Robert Wyatt, the book launch for Marcus O'Dair's biography of the great man. This was to take place later in the evening, and the reason we got there early was to catch Billy and Martine's bandmate Roz Harding playing as part of the free concert in the foyer. 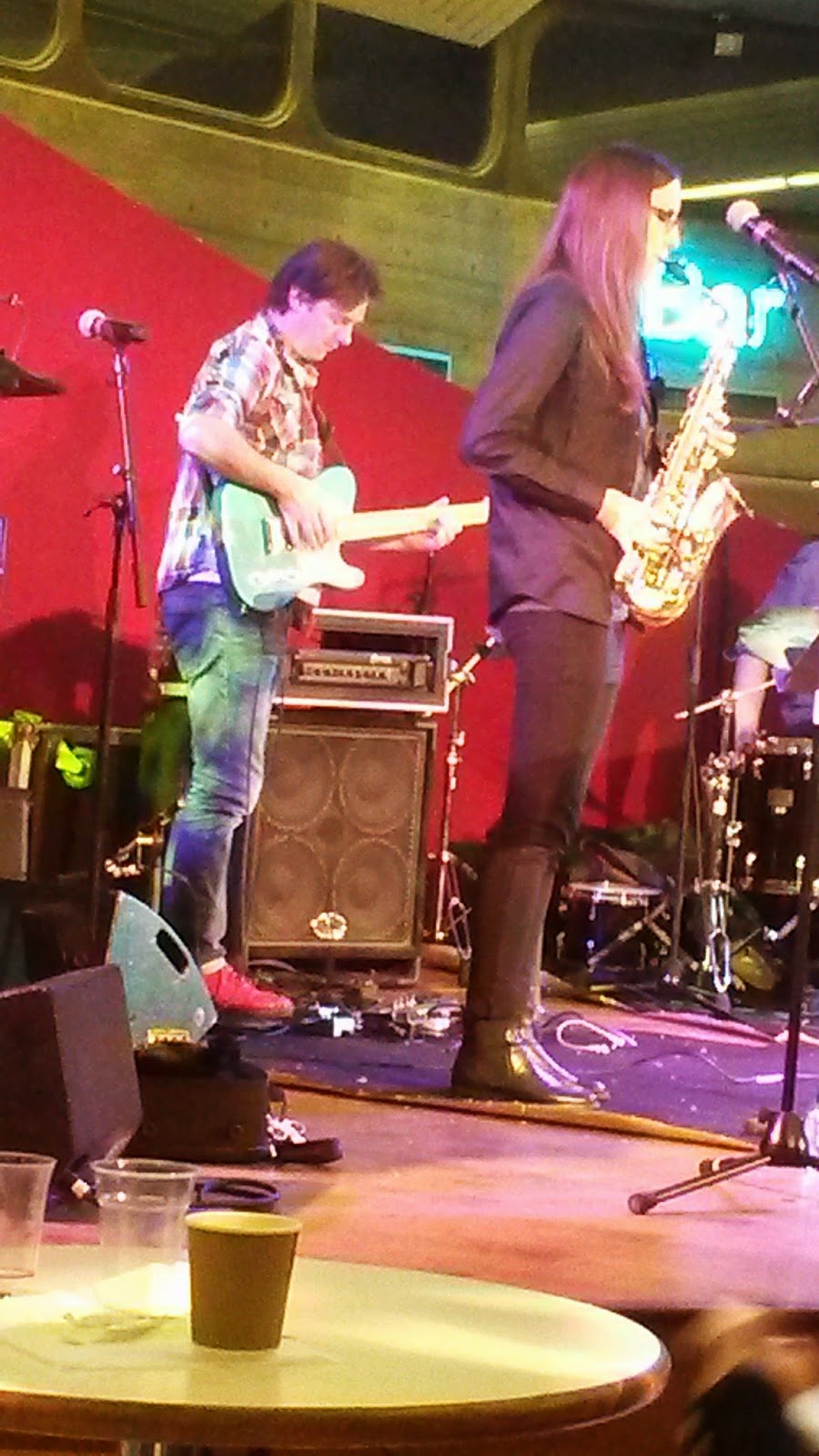 Roz Harding's Wave were performing as one of four female-led ensembles as part of jazz club and label Blow the Fuse's 25th anniversary celebrations. We got there early enough to catch the Chelsea Carmichael Quartet too, and damn good it was! Roz Harding's Wave followed and she was supported by Mike Outram on guitar, who also appears on Unrecorded Beam, and Jim Bashford on drums, the trio playing out an enjoyable sparse modern jazz set.

The free concert was headlined by Blow the Fuse founder Alison Rayner's Arq, playing tracks from their new album August. Despite Dierdre Cartwright's guitar amp spluttering and eventually going FUBAR and having to be replaced mid-song (well done the guitar tech), the set was hugely enjoyable and perhaps more melodic than Wave's. That was a shame as our partners had decided to call it a day before Arq came on, leaving us two reprobates to our own devices.

Alison informed us all that their new CD was for sale from the merch desk, to the bemusement of the guy standing behind it who thumbed through the box on the table without finding it. Phil informed Alison about this, and the CD seller reaped the whirlwind, as the dozy sod had a full box of Arq CDs under the table by his feet!

And so on to An Evening With Robert Wyatt which commenced with Marcus O'Dair interviewing Robert, who arrived onstage to a long and thunderous ovation. As Robert does not play live this was as close to a gig we are ever going to get, so we took the opportunity to let him know how much he is appreciated. Marcus's questioning took in Robert's songwriting and collaborations, with a brief detour into his radical politics. There then followed a Q&A session with the audience, and the all too brief encounter was over.

Next up was a short set by vibraphonist and software manipulator Orphy Robinson, another and recent collaborator with Robert. Taking in sound samples that included a humorous take on the shipping forecast of all things, Robinson played his looped vibraphone to create a dark soundscape. The evening was concluded with an airing of the BBC documentary Free Will and Testament:The Robert Wyatt Story.

By now it was a lot later than we had expected and we had to dash across town to get a tube train and then an overground train back to our hotel in south London. This was compounded by an enforced detour up the Northern Line due to some unspecified problem on our preferred line, but we managed to get "home" a minute before the witching hour, so all's well that ends well.

We didn't get the chance to say our goodbyes to Billy and Martine, so, if you're reading this, I can't wait to hear your new single!