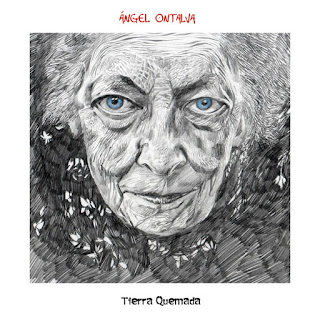 A mark of a good album is how much it resists being filed away in a neat little niche, and Tierra Quemada by Spanish guitarist Ángel Ontalva is defying my efforts in that direction very nicely indeed. You may know Ángel as the guitarist and leader of Spanish heavy eclectic prog band October Equus, but this album proves there is far more to this man than meets the ear on hearing his band's music, nicely angular and coruscating stuff as it may be. Indeed, anyone familiar with Ángel's work will know he likes to branch out.

Three consecutive releases show the highly varied and always interesting scope of Ángel's muse. 2012 saw the release of Mundo Flotante, his first solo album, and a thoroughly enjoyable and languid album it is, too. Then in 2013 we had two concurrent releases; Permafrost from October Equus, and its companion album Isla Purgatorio, which was something entirely different to the band's usual output and was released as October Equus Quartet, essentially the usual group minus Victor Rodriguez' keyboards, and coming over as if the Mel Collins' era live King Crimson had been a product of the 21st century rather than the early 1970s - a truly stunning album that deserved more than the scant attention it got at the time, for it is far more than an afterthought to Permafrost.

That brings us up to date, and Ángel's second solo album Tierra Quemada. Translating as "Scorched Earth", and utilising the rich talents of the rest of October Equus behind the keyboards, bass, and drums, plus additional musicians lending saxes, clarinets, cello, hurdy gurdy and duduk to the heady mix, this is an album that is full of musical flavour, and is anything but the kind of heavy blast you might expect from the title and indeed from his avant-rock band. For all that, Tierra Quemada is a fulsome and spicy work that will satisfy even the most jaded palate. Mention must also be made of the fine artwork in the booklet and inserts. Ángel is also a highly gifted graphic artist, another string to his rather full bow!

The music on this fine album is often laced with a more than a hint of Oriental zest, apparent from the first track onwards. Tarlaya Ektim Sogan marries an insistent rhythm with a snake charmer of an arrangement from the tightly knit ensemble. All the tunes are composed by Ángel, who knows how to evoke an Eastern atmosphere without cliché as the gorgeously liquid Ugetsu highlights. I have not heard anything this evocative of the mysterious East, be it Near or Far this side of Dennis Rea's spellbinding Views From Chicheng Precipice*.

Some great sax work weaves through the more insistent rhythms of El Telele, and a repetitive but nonetheless intriguing bass line of one sort or another is becoming a feature of the album. One exception is the plaintive melancholy of Bicycles were quite popular in the Forbidden City, which serves as a short, highly musical entrée for the climax of the album.

Fittingly enough, Tierra Quemada achieves an apogee of bliss with the final track. Cobra Trap is a sun-kissed delight of warm and sinuous themes coming to a natural climax, playing out on some marvellous fretwork from Ángel. Introduced with the cello, the guitar winds around until a calm but insistent bass line allows the ensemble the freedom to weave clarinet, saxophone and keyboard melodies on to its steady framework. Soon, Ángel teases with a few lines of molten gold as the tune is taken to the bridge with more fabulous reed work from Pablo Hernández. A great end to a contender for Album Of The Year in my tiny universe.

Bandcamp - Isla Purgatorio (yes, you need this, too!)

* Dennis Rea is an outstanding American musician with a long connection to Chinese and Taiwanese music, and interviews, reviews, you name it, can be found on this blog by typing his name into the search box.
at November 12, 2015