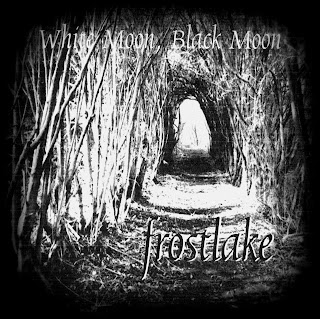 Martin Archer's Sheffield-based Discus Records is a home for the wilfully strange, and the occasionally unfathomable, but with frostlake the label presents its most conventional face yet. frostlake - the lower case "f" is deliberate - is a mysterious pagan goddess who weaves hymns to winter spun from the crystalline mists of the dark months on her debut album White Moon, Black Moon. She is also a member of Discus acts Juxtavoices, and Orchestra Of The Upper Atmosphere, the former an enticing "anti-choir", the latter a magnificent improvising cosmic rock beast. On her solo album and left to its own devices her muse crafts delicate but dense psych-folk, in so doing highlighting her many and varied talents, showing that she is not content to be pigeonholed into one genre.

This introspective and beautiful album stirs into life with Black Winter swooping across the still land, a song sung from the perspective of a bird in flight, frostlake's picked guitar and echoey atmosphere forming the background for Nigel Manning's flute which becomes the airborne avian, carried aloft on frostlake's multi-tracked harmonic choir. The restless protagonist of No Looking Back seeks escape, driving her car far beyond the originally intended destination to "...leave this madness behind, follow a road that has clearer signs". Haven't we all thought that way at one time or another?

The muffled stillness of snowfall, the contemplative effects of moonlight in a dark room, the hypnotic power of Dark Winds made moan, all this and more marries the natural phenomena of the dark months with its power to turn us towards the introspective side of our psyches. The warmth of this record is an aural equivalent of curling up by a roaring fire while outside one of those strangely calm winter snowstorms blankets everything in white inertia.

In addition to painting the eternal English winter canvas, there are human songs in here, too. Connection bemoans the surplus nervous chit chat that fills all the gaps, because there's nothing to say, really, no common ground. Judicious use of a chorus pedal on the electric guitar and minimal Korg piano combine to produce a forlorn atmosphere redolent of Nick Drake.

Quiet Storm is a tale of darkness rising, like a river soon to burst its banks, with subtle use of accordion and field recording over the plucked strings, painting a melancholy picture.The never ending wet grey of English winter is perfectly described in Endless Rain, frostlake gently bemoaning "Where do birds go to hide from rain, think I'll join them in their waiting game", while cyclical arpeggios gently tinkle away, and the subtle addition of clarinet in counter melody is a nice touch.

Sombre while simultaneously radiating warmth, White Moon, Black Moon has proved a timely, reflective, and spiritually cleansing soundtrack after the recent horrific events. It reminds me that those of us with a soul and a culture to cherish and respect will always triumph over the indoctrinated and spiritually bereft who through their misguided acts of pure evil would do us harm.