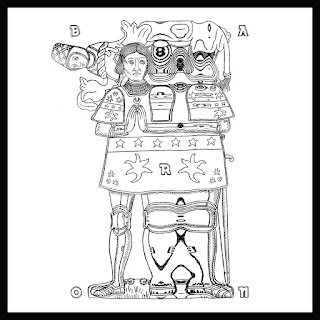 With their previous album, the rather upstanding Columns, Brighton post-everything-rockers Baron described themselves as playing "Neo-Monastic Byzantine Psych Art-Rock", and now they have moved on, adding vegetables and Germanic ambience into the mix, becoming purveyors of "Neo-Monastic Byzantine Pastoral-Kraut-Drone-Lettuce-Rock". A nifty little pigeon with asymmetric eyes fits in that odd-shaped hole, I'm sure.

Based in Brighton and employing some big fish from the small but highly talented pool of musicians that you will find cropping up in other bands based in that fair city, such as Diagonal, and Autumn Chorus, both of whom may or may not be currently in stasis, Baron are led by singer and guitarist Alex Crispin. Alex has a distinctive baritone croon that paints his songs of mysticism and pastoralism in a melancholic hue, aided and abetted by his favoured guitar sound, reverbed and echoing, swirling round in the wide open spaces afforded by the airy mix.

"Torpor" is a state of physical and mental inactivity, or lethargy. The feeling one has occasionally when the weight of the world presses down and one's limbs seem to become immovable objects. The feeling transmitted by this record, for me at least, is one of a more contented state of immobile bliss than the dread implied in the album title. Carrying on from where Columns left off, the band's sound takes on a heavier tone when additional guitarist Joe Hollick from psych-folk troupe Wolf People stirs up the mix.

One of his two guest appearances is on the track Stry, which builds as a moss gathering stone rolling down a low incline, gathering momentum by increment to become a post-rock mash-up of irresistible power, but it is all done rather deftly, the climactic bludgeon riffola and guitar freak out will hit you as a hundred tonne feather.

The band carry on with their peculiarly filtered take on post-spacerock with Sleepless, swapping a peace pipe with The Blue Nile, early Felt (UK version) and The Chameleons and exchanging stories of cosmic derring-do. Baron have not entirely left behind their inkling for pastoral dreamscapes, as the lovely and elegiac Dark Down proves, but there is an over-arching psychedelic shamanism at work in these zeros and ones, one example being the hypnotic fire dance of Deeper Align with its call to ancient wonder made over a repetitive mantric guitar and drum groove.

The quasi-religious atmosphere of that last track and indeed the whole album no doubt owes more than a nod to the fact that "parts of the album were surreptitiously (and not entirely legally) recorded at Purton Green, one of the last surviving medieval halls in the UK". This otherworldy imagined landscape is immediately apparent in opener Dragonfly, Alex intoning mournfully "Dragonfly over me" as the mystical tone of the album is apparent from the outset, laid before us with this highly charged psychedelic mantra, the swirling guitar and keyboard figure taking the song to an abrupt end.

Highly meditative as well as uplifting, this fine album is out on 6th November (see pre-order links below), and well worth investigating if you dig the modern psychedelic seam, baby!