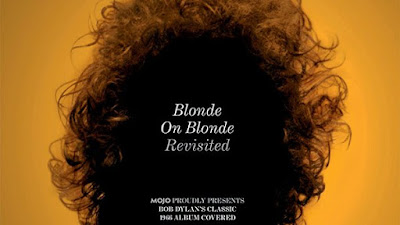 The best MOJO covers CDs are usually their classic album reinterpretation extravaganzas. This time around it's an album that probably gets in every Bob Dylan fan's top five, the iconic and groundbreaking Blonde On Blonde, half a century old this year. This artist is a natural for the MOJO treatment, as it has often been the case that Dylan's more accessible songs in particular often sound better performed by someone else. I mean, even the most fanatical Dylanologist cannot deny that Hendrix's version of All Along The Watchtower takes that song into another universe. That's probably the most obvious example, and as you know, there are several others.

However, some Dylan songs can and should only be played by the Minnesota Bard himself, and there are many of those on this classic album, so let's see how it rolls...

As ever, the best way to cover an iconic tune is to reinvent it, and here Middleton does just that, turning Dylan's stoned showband stagger into a menacing electro-drone march of the undead, which I would imagine is an atypical approach for the indie-folkie. You don't have to be stoned but it probably helps. A promising start.

My Darling Clementine - Pledging My Time

MOJO being a mainstream magazine, and me being buried deep within the obscuranist culture bunker, it comes as no surprise that most of the artists on this CD are names hitherto unknown to me, and this country duo are no exception to that rule. This is so stripped back and downhome, you can almost see the porch of the tumbledown shack from which these two strum and croon their thang. Yee-ha!

His voice may sound like this anyway, I wouldn't know, but Gunn's otherwise warm-hearted countryfied cover of this song struggles with and occasionally fails in its task to not become an admittedly decent Zim impersonation, but an impersonation nonetheless.

Chip Taylor - One Of Us Must Know (Sooner Or Later)

A funereal atmosphere pervades a claustrophobic version of the tune from the songwriter best known for penning Wild Thing. Unusually for the Zim the song contains a relatively literal lyric that is not much open to interpretation. Taylor turns up the melancholy to 11. Pass the hankies. One of the better covers on this album.

Phosphorescent - I Want You

Dylan's allegorical paen to desire given a subtle treatment by American singer-songwriter Matthew Houk aka Phosphorescent. Although there is nothing particularly remarkable about this version, as with others on this CD, the strength of the song easily overcomes any tendency by the artist in question to meekly follow in Bob's footsteps. Quite nice actually

Ah, this is more like it, someone with the cojones to stamp their own identity on a well-known tune. Country-psych reverb-heavy wigginess makes this a joyful little romp that while not as radical as Malcolm Middleton's approach does enough to be different, flying off into the cosmos at the end in a heady swirl of sound.

One wilful and highly individualistic talent covers another, and such is Chapman's weight of experience, the tune becomes instantly his. Some great slide work at the end of this 12 bar boogie-shuffle is a delight to behold.

A common approach on this album is for the artist to strip away the music and expose Dylan's lyrics for the wonderful things they are, and this is another that takes that route, slowing the tune down to a crawl into the bargain. The trouble is, it seems to suck the life out of the thing. A good cure for insomnia, methinks.

Whereas the last one was soporific, this fizzes with attitude and a funky swagger and is far better as a result. Another of the better ones on here.

Kevin Morby and his acoustic guitar do Woody Guthrie covering Dylan, and given the obvious connection it works just fine. Sounds like it was recorded on one microphone in his kitchen, which only adds to the atmosphere.

This CD is somewhat lacking in female representation, and here we have only the second female voice on the album. Marissa Nadler, who has already released an album of cover versions that included two Dylan songs turns in an ethereal version of the tune with an elegiac feel. Spooky.

As for the lack of female interpretations, I would have loved to have heard The Unthanks cover one of these tunes.

This version of the energetic Obviously 5 Believers by Night Beats, whom MOJO describe as a "psych-soul" band fair zips along with youthful zeal. Sounds like an 18-year old Dr John, heavy on the voodoo gumbo.

...and we end with only the fifth artist I'd heard of before on this compilation. The multi-talented O'Rourke is a natural to cover the "epic" on the album, Dylan's song of awe to his then new wife Sara Lownds. Mixing found sounds with simple but effective instrumentation over its gently unfolding 13 minutes, this is a great way to end a largely successful album of reinterpretations.