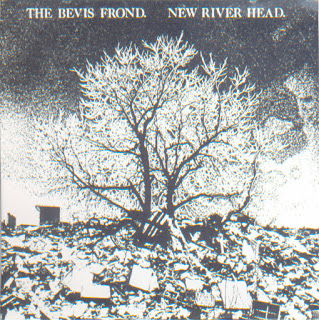 At the end of the 1980s I discovered this strange psychedelic rock band called The Bevis Frond. I cannot now remember how or exactly when I came across this fabulous noise, it was the 80s you see. That decade was my version of the old mantra about the 60s "if you can remember them, you weren't there". The Bevis Frond was actually one bloke and a portable studio, at least for the first couple of albums, not that I knew that then. They/he made a noise out of time, transposing 1967 psychedelia with a heavy Hendrix fixation into the modern age with the help of Nick Saloman's world weary lyrics and careworn nasal London intonation. The second album proper Inner Marshlands released in 1987 remains a classic of the psych genre.

By 1991, and by now a proper touring band, the Frond were up to their fifth album, and when you include two additional collections of early and unreleased recordings, this prolific songsmith had released seven albums in four years! With New River Head, the Frond hit creative heights, cramming every imaginable style into four sides of vinyl, from folk influenced tunes featuring violinist Barry Dransfield, to Stoogian punkarama with honking sax, to grungy pop, and angry psych-punk, via full on guitar freakouts, to reflective singer-songwriter fare, and not forgetting a lysergic ambient trip though imaginary landscapes. Those latter lunar undulations feature in the ten minute plus excursion on side three under the title of The Miskatonik Variations II, probably the trippiest thing heard back in 1991 since well before punk broke cover.


The universe in eight minutes...

Producing countless albums and playing hundreds of gigs up to a hiatus in 2004 brought on by the death of his mother, Nick Saloman and his trusty band of cosmic warriors played music that was simultaneously nostalgic for scuzzy late 60s hippy/proto-punk noise, but brought bang up to date with the furious energy of modenistic outsider blues narrated with a drawn out sigh, or a cynical sneer. all played out well below the radar, the preserve of a select few. Consequently, The Bevis Frond have been something of a best kept secret, but with Fire Records ongoing reissue program getting attention in the mainstream music press, hopefully Saloman's rightful place in Rock's Rich Tapestry is now assured with the re-release of New River Head, his most all-encompassing work.

This track listing is from my original Woronzow double LP. The tracklisting on the Bandcamp download after the end of "Side 2" is in a different order, and also includes bonus material.


"I got no point I wish to make. I just wanna be your undertaker"