This month the MOJO cover CD features sounds from across Western Europe that contributed to the musical zeitgeist that serenaded David Bowie during his brief stint in the German capital in the later years of the 1970s, to tie in with their feature article on Mr Jones' time in Berlin. Twelve of the fifteen tracks are German and the CD forms a loose collection of the less obvious Kosmische Musik of the times, less obvious because more than likely licensing issues prevented the use of the usual suspects. This makes it far more interesting than it might otherwise have been, and Neu Decade seems at times like a trawl through the lesser played slabs of vinyl in my small, yet perfectly formed Krautrock collection. 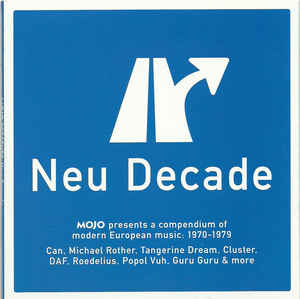 Developing free from the constraints of a deeply ingrained blues and latterly, rock'n'roll heritage, these bands and artists naturally ventured well beyond those base building blocks of all British and American alternative musical culture to forge something entirely new from the ruins of post war Germany, and beyond.  These musicians lived in a brave new world where electronics and keyboards often took precedence over the electric guitar, with a few very notable exceptions of course, and these pioneering sound technicians were boldly going where no ostensibly "rock" bands had gone before, and in that sense were making truly progressive music.

Michael Rother - Karussell
In keeping with the Bowie-in-Berlin theme it is fitting that the opening track comes from Deutschrock luminary Michael Rother, who was due to collaborate with Bowie in 1977, a pairing that unfortunately didn't come off. This track, from Rother's first solo album sounds like his former band Neu! with electronic motorik rhythms replacing Klaus Dinger's thunder.


Brainticket - To Another Universe
This multi-national band always gave the impression that they were powered by the choicest psychotropic drugz, as this dislocating voyage along misfiring synapses testifies. This track is lifted from the 1973 album Celestial Ocean, a fried trip recounting the "after-life experience of Egyptian kings traveling through space and time", and who am I to argue? Brainticket made much use of narration instead of singing, a gimmick that does wear a bit thin after a while. I can think of a modern band who should take note.

Amon Düül II - Fly United
One of the big names now... this track is lifted from Amon Düül II's 1973 Vive La Trance album. By then, the splinter group "II" from the original Amon Düül agitprop hippy commune had lost some of the more outlandish and experimental musical edge that gave birth to such masterpieces of unclassifiable lysergic wiggery as Phallus Dei and Yeti, but this song is still a fair representation of their loose acid rock vibe.

Can - Future Days (edit)
From the Cologne masters' new singles box set, Damo and the boys craft three minutes, twenty two seconds' worth of seemingly effortless sassy elegance. However, why bother with an edit when the full nine and a half minutes long version awaits you on the LP of the same name, I wonder?

Cluster - Dem Wanderer
Hans-Joachim Roedelius and Dieter Moebius were perhaps the most bookish pair in Deutschrock...well, they were on a par with Schneider and Hütter at least. This intriguing example of what I can only term intellectual ambience from their marvellously rarefied 1976 Sowieoso album goes "sproing" in a fetchingly chin-stroking fashion.

Deuter - Der Turm/Fluchtpunkt
Primitive and experimental, this is what Deutschrock is all about. Listen to this free form piece of music from multi instrumentalist Georg Deuter and you can hear elements common to the early explorations of all the more well known bands that fall into this singularly individualistic category.

His first album, from which this track is taken was released in 1971 and is simply entitled D. It is something of a below-the-surface classic of the time, since when Deuter has gone on to amass a huge discography of exploratory music.

Guru Guru - Electric Junk
Apart from the later Roedelius track and the album closer, this is as close as anything on this album to rock music. But this is free rock music or ur-rock musik, as Mr Cope would put it. There are no rules, and after charging out of the traps, the LSD takes hold of the elephant as it wastes all before it. About halfway in the whole band decide...heeeyyy...let's talk about this, as they loll about on a burst sofa discussing the next move before a rolling bass line takes the tune down the road in the company of some fine Hendrix inspired wigout. Bloody marvellous! This is from their 1971 second album Hinten, part of a run of unmissable early albums you need to hear if you like having your mind fried by off the wall guitar music with seemingly no precedents.


The band are led by a wonderfully barking and very powerful drummer by the name of Mani Neumeier, whose Bonzo-on-acid tub thumping wanders up the garden path to Earthly Delights hand in hand with Uli Trepte's thunderous bass. The spearpoint of this unfettered power trio was a guitarist whose untramelled riffing and spiked soloing made for a whole that is a parallel universe Cream, born in a world were the twelve-bar had never been played. Also, the plank spanker has possibly the best name for a guitarist one could possibly wish for - come on down Ax Genrich!

Popol Vuh - Steh Auf, Zieh, Mich Dir Nach
Popol Vuh were formed in 1969 by classically trained pianist Florian Fricke, who, thanks to his rich family was one of the very first owners of a Moog Synthesiser. Depending on which source you believe, it allegedly cost up to DM800,000, and was probably the size of a small shed. Who said prog wasn't a middle class sport? Wanting to take his already reverential music in yet more elegiac directions, Fricke later sold his synth to Klaus Schulze, making him doubly influential in the instrument's beginnings.

This track is from 1975's Das Hohelied Salomos, the Vuh's sixth album, by which time Fricke's use of the synth is eschewed for a more organic and ethnic approach, with guest musicians playing sitar and tabla.

Roedelius - Am Rockzipfel
A later entry into the fray, this is from Roedelius' first solo album in 1978, and presents us with a very untypical bluesy chug that keeps on breaking down like it realises it doesn't quite belong in this universe. Satisfyingly odd.

Conrad Schnitzler - Die Rebellen Haben Sich In Den Bergen Versteckt (Schaltkreis Edit)
An early member of Tangerine Dream, and Kluster, the pre-Cluster group with Roedelius and Moebius that reflected the harder inital consonant in its steely-edged industrial soundscaping, Conrad Schnitzler went on to have a long solo career. His career-long experimental inclinations are present and correct on this sparse electro march of the robots from 1974.

Tim Blake - Metro Logic
The only Brit on this compilation, Tim Blake was of course a member of Gong, before escaping the mothership in 1975 to make some langorous synth music of his own.

Pyrolator - Danger Crusing
The next three tracks take us into the post-punk era. Pyrolator was ex-DAF member Kurt Dahlke, who here makes some almost friendly, yet icily creepy noise.


Richard Pinhas - The Last Kings Of Thule (Part 1)
Mavellously left-field French guitarist Richard Pinhas of Heldon fame should need no introduction if you've been paying attention, and here we have a track of typical brooding strangitude from the 1979 album Iceland, one I admit I have not heard before and will now be searching out.

DAF - Bild 4
Another entry from the post-punk years, DAF were a full-on music-concrete-with-a-punk-sensibility experience. This is from the group's feral 1979 debut album Ein Produkt der Deutsch Amerikanischen-Freundschaft. Uneasy listening to rattle yer fillings.

Tangerine Dream - Ultima Thule Part 1
Pick a tune to represent one of Krautrock's top six bands, in this case West Berlin's Tangerine Dream, whose Edgar Froese first used the words "Kosmiche Music" to define his and his peers' common ground, and it wouldn't be this VERY sub-Floydian throwaway debut single from 1971, that sounds like it should have been recorded in 1967. Still, a strangely neat end to an interesting CD, nonetheless.
...

As ever with these magazine CDs, there are some obvious and some not so obvious omissions. It is a shame that there is no Ash Ra Tempel from their early "guitar" daze, a band so out on limb they made Guru Guru sound like a completely rational proposition, but for anyone unfamiliar with all but the most well-known German rock of the 1970s this is not a bad compilation at all.