When is a review not a review? When it goes Grrrrnnnnggghh, that's when...

This started out as a review of an album entitled Synchromysticism by a band of renegades calling themselves Yowie...

Apparently first used after an incident in Prague Castle in 1618 that initiated the Thirty Years War, “defenestration” is the act of throwing someone out of a window. This begs the question that, being Prague, it must have been spoken in Slavic tongue and therefore was not “defenestration” at all, but some semi-guttural utterance us pampered Anglos would have no hope of pronouncing. Anyway, nitpicking at the technical niceties of language while simultaneously having a dig at the limitations of Wikipedia aside, the drummist and de-facto leader of this band of American lunatics goes by the name of Defenestrator. If that isn’t a reason to review an album I don’t know what is, and boy, do I need a reason right now.

You see over the past couple of months I have lost my writing mojo, and no doubt that provokes a sigh of relief from you, dear long-suffering reader. In fact if you’re still reading this, you are one of only thirteen people worldwide who do not merely skim-read these missives, and for that I commend you. If I were giving out prizes you would get an overripe banana sent by elf piloted moose to any destination you choose. I'm not so you'll have to make do with feeling superior...it works for me!

Actually I haven’t so much lost my mojo – as this stream of liquid brown stuff proves – as I am increasingly despairing at the incessant tsunami of musical flotsam, jetsam, sewage, and worse, that rises in never-ending huge waves and breaks over the collective hard drives at Astounded by Sound Towers, falling away to leave behind piles of indistinguishable fare that 40 years ago would not have got much further than the limited imaginations of its creators. I include much-lauded name acts in this invective as I do the most unknown of amateur bedroom musicians.

The rock era is dead, there are no stars any more. Cynical exploitation knows no bounds and now includes tours of holograms of dead rock stars fronting bands of bewildered musos who must be wondering what the very fuck they’re doing there...oh yeah, it’s a wage, ain’t it? The latest of these farces, following on from the pioneering “Ronnie James Dio”, is the Zappa estate’s latest bid to kill off the career of the only true representative of the great man’s music, his son Dweezil, by way of a hologram of the icon fronting gawd knows who as a backing band. Whoever they are should be thoroughly ashamed of themselves. Next up, watch as the tour industry for actual living bands and musos dies on its feet as this new Frankenstein’s monster in the nostalgia industry eats up all before it in an orgy of race-to-the-bottom capitalismos, co-sponsored by the shiniest of regulation sidestepping teflon-coated taxi apps. Get driven to the gig, and possibly home if you’re lucky, but via the woods, by an un-vetted leering psychopath who puts up with being paid £2.31 an hour by his “employer”, because it gives him the chance to indulge his dark obsessions. Imagine said swivel-eyed dribbler delivering you to your favourite bar to watch “Frank Sinatra” fronting “The Sex Pistols” while you enjoy a hummus burger with mogo chips served on an upturned toilet seat. Actually, don’t imagine that at all, it’s not good for the soul. At the going down of the sun and between the jumpers for goalposts, it’s all our fault ultimately as “we” will head off in droves to watch these atrocity shows while real culture dies starving.

Oh...hang on...Synchromysticism by Yowie....it’s certainly different, to a point. They obviously love Ruins. I'll review it properly, later...maybe. To be fair to them, you can hear it all HERE.

That is all, now go and away and do something useful like hacking into the mainframe of a hologram projection company and turning all their holograms into Hitler...or summat. 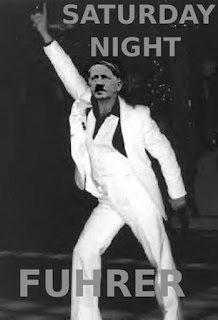 Yours explosively, Roger McNasty
at September 23, 2017