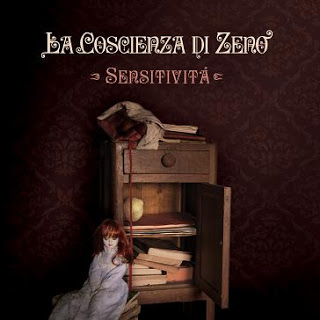 La Coscienza di Zeno formed in Genoa in 2007, and they released their now hard to find self-titled debut album back in 2011 on Italian label Mellow Records

The band are named after a novel by Italo Svevo. La Coscienza di Zeno, or "The Confessions of Zeno", is a fictional diary written by the protagonist at the behest of his psychiatrist, depicting his problems with his business partner, his father, his wife, and his addiction to smoking, shining a spotlight on the contradictions therein. The diary was published by the psychiatrist in revenge for Zeno suddenly discontinuing his visits. Sounds like an interesting read!

Keyboard player and lyricist Stefano Agnini used themes from the novel in the lyrics for CdZ's first album, and it is fairly clear on listening that the lyrics are an important part of the musical jigsaw. Unless the lyricist writes in a fictional language, or is Jon Anderson at his most fanciful, understanding the lyrics in their native tongue is obviously a great help to any would be listener. However, as with all good Italian progressive music, the overall feel of CdZ's songs is transmitted more than adequately through the long instrumental passages in the music, and of course by the sheer sonorous beauty of the Italian language in the vocal sections.

With this new album, the lyrics for all but Tenue (Colombi) and Chiusa 1915 (Scherani, who also wrote the music for this one) were penned by Agnini, but the music for the whole album is spread fairly evenly between all the group members in various combinations. The only other solo composition on the music side is Tenue (Agnini). A quick Google Translate of the track titles reveals that "Tenue" is "Small intestine". I would love to see a translation of that particular song*!

The fact that this record is on AlrOck's subsidiary "traditional" progressive label Fading Records indicates that this band may be of the dreaded "neo-prog" subset. I do so dislike that term, but I suppose genre labels are initially useful if you know nothing of a band, although everyone has their own interpretation of what constitutes "neo" I'm sure. A quick glance at PA's page for that genre shows that the vast majority of the more well known bands listed there are not ones that I would normally listen to. But, hey, what it comes down to in the end is that any music is good, bad or indifferent, and we all have our own way of reaching our own subjective conclusions to that particular conundrum.

Why not ditch the categorisation and listen to this while reading:

When they started out the band used classic 70s English prog as their template, but soon changed direction to a more RPI based sound, a logical thing to do given the vast legacy of that marvellous scene. I profess to have barely scratched the surface of Italy's progressive rock heritage, but I can hear Banco del Mutuo Soccorso in there as well as Locanda delle Fate.

CdZ take these influences, and I've no doubt many more, to create lovely grandiose sweeping emotional epics, the 12 minute title track building to a giddy climax on the back of Alessio Calandriello's pleading but never straining vocals and the massed keys of the band. The end section revisits their earlier Genesis influence, and while I can only take this kind of thing in small doses, you can't help but be impressed by the band's sheer musicality.

A good Italian singer like Alessio could sing out his laundry list and make it sound like a love song, and the melancholy writ large in Tenue, the "Small intestine" song, might be a case in point. Where's that translation when I need it?

The intro of Luca Scherani's Chiusa 1915 is a Yes homage, replete with some highly Wakeman-esque piano, before turning back to the Italian atmosphere once the vocals kick in. The guitar and synth solos turn to Genesis, and this has turned into perhaps the most derivative song on the record, but it is redeemed by Alessio Calandriello's vocal performance. If I was in possession of such a thing, this is one track that would make my "neo radar" go into bleep overdrive. Nice if you like this sort of thing I suppose, but not for me.

Alessio continues to guide the band through the next song, a fairly sombre affair that definitely loses something for me, not being able to follow the lyric. A decent if fairly low-key piece of music, it has led me to the conclusion that the album flags a bit in the middle.

However things pick up with some sharp guitar picking over Mellotron backing to kick off Pauvre Misère, that although still heavily 70s influenced it is a nicely structured song, combining angular sections with a high sense of melody. This and the title track are my two favourite pieces of music on the album.

The modernistic twists on the classic 70s influence continue into La Temperanza but possibly not quite as successfully. There are moments of inspired writing on this album, but also moments of high cheesiness. I cannot fault the playing, but the sooner the band leave the 70s behind the better, as I am sure they are more than capable of writing a modern progressive rock epic. Perhaps Alessio's recent stint with avant-prog AltrOck supergroup Not A Good Sign will provide some of the inspiration?

* I think I know who can help on that score :)
....later...Raff came to the rescue as I knew she would. "Tenue" in this context means faint, subtle or flimsy. Never trust Google Translate!