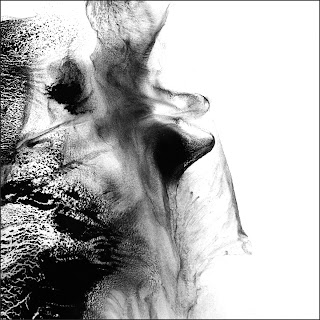 The Stargazer's Assistant is a side project of Guapo co-founder, David J. Smith. In that band he is a tremendously imaginative drummer and percussionist, but here he spreads his wings to experiment with many instruments and found sounds (see below), only to fall just short of "playing" a kitchen sink.

This delightfully presented double 10" 33rpm set is encased in a fine art print, and the whole package is simple yet effective, evoking just the right mood to compliment the wide cinematic vistas of the music. The art was by Patti Jordan, the design by Keith Utech, also the man behind the label of this release.

The album consists of a new EP Mirrors & Tides, which comprises the first three tracks, and a reissue of the Shivers & Voids EP from 2008, again on Utech Records.

Our journey begins with Coral Butterfly. We enter a submerged dreamscape through a portal provided by way of an analogue tape machine on fast forward. Our listening perspective is then left to swim around the murky depths inside the rotting hull of a long sunk ship on the ocean floor. Eerily calm, but ever aware of imminent danger and impending flight, the 17 minute Coral Butterfly wends its stately way in a world where time has stood still. Largely created by industrial synth washes and treated piano (possibly) the tension builds on a rising chord that drops away suddenly, and we are now in another universe entirely. Gossamer wings flutter, collide and separate incessantly to the sound of low bells echoing in the distance.

The bells quietly signal a change in atmosphere as multi-tracked and reverberating voices courtesy of David and Mika Rättö create a meditative mantra around the bells' low key but continuing insistence. I am put in mind of Bowie's Warszawa and the second side of Low in particular. The mantra slowly builds in volume but is never threatening, unlike the first part of this engaging and strange musical adventure.

Mirrors & Tides invites us to look inwards and inspect some dark and long forgotten corner of our psyche, to a repeated cyclical piano riff that ebbs and flows to the call of the Moon. Calming and not at all ominous this track perfectly compliments the previous intense epic.

There is a vastness and feeling of awe in the sounds on this album that you cannot help but be enthralled by. The delicate sounds of ghosts in caverns collide with helter-skelter darting hither and thither in the Secret Kingdom Of The Swift. Order is restored with tribal percussives and suddenly the chaos has a sense of purpose.

There is far more in this album than you will ever get out of a cursory background listen, although strangely it works that way too. I know I have said this before in many a review, but, if you have the chance, listen to this on a good hi-fi, or through decent headphones. It will be the aural equivalent of watching flowers bloom, albeit black roses.

We leave the dreamy world of Mirrors & Tides and head down to the spooky nightmarish scenery of Shivers & Voids. Night Soil should ideally be listened to in near total darkness for full frightening effect. There is a proper "jump out of your skin" moment in this track, but I will not spoil the surprise. The track ends with the monstrous being leaving the room, hidebound by chains, or at least it does in my imagination.

I had not heard this now five year old EP before, but Night Soil fits more into the dark territory of Guapo than the new tracks, but it is certainly not "Guapo-lite", and sufficiently different to be very interesting indeed.

The track Shivers & Voids features a darkly beautiful chanted mantra over a simple backing of reverbed low-end guitar notes, and it is very effective and emotive.

Ending with The Dream Kingdom, we enter an ancient world where gloomy pine forests that have stood undisturbed for centuries let in chinks of light on the rare times when the sun pokes its way through dark over-laden tumultuous clouds, always moving at a pace. Occasionally a dried out and dead branch crashes through the timeless canopy to the barren forest floor, strewn deep in very slowly decaying pine needles. In the distance an unseen small animal lets out a final breath....

Well that's how I see it, although I'm sure everyone will have their own interpretation. This is an album for those who love adventurous music making, in other words, true progressive music. Head over to Bandcamp and buy it now, and for those who can remember proper audio fidelity, buy the vinyl version at Utech Records. In any event the vinyl is worth buying for the artwork alone.