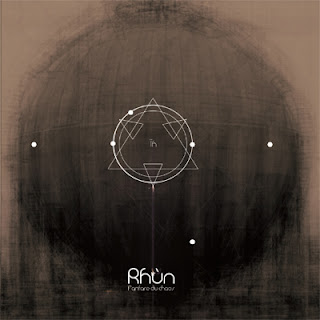 Rhùn are a French band, obviously in thrall to Magma, right down to the sub-Kobaïan language their songs are sung in, by a band-leader drummer in partnership with a female lead, no less!

With the apt tag line "Fanfare du chaos", Rhùn charge straight into your personal space with opener Toz, the first of three tracks that comprised their debut EP Ïh, released back in December 2012, and now represented here along with three earlier demos to flesh out the running time to a not over-taxing forty one minutes. The whole thing has been mastered by the skilful hands of Udi Koomran to his usual high fidelity standard.

This is the previous edition of the EP. For the remastered samples, go here:


Thanks to Udi Koomran for putting me right!


Toz is a crazy runaway train of a track, featuring traditional Zeuhl call-and response vocals, honking saxes, wild guitar sections, and all-encompassing madness. It is a fitting introduction to Rhùn's wild but familiar universe. Then we have the charming Intermud, starring Ensemble Patagrulair, a chamber rock quartet of some style and panache. While none of this is particularly unique, it is an involving and soulful experience. The band obviously love what they are doing, and their take on the Magma experience is given some individuality by the frequent interjections of Thybo's angular and occasionally jarring guitar runs.

No Zeuhl sound is complete without some thunderous bass playing, and Damoon does not disappoint. The final track of the EP triumvirate, Dunb, is a mini-operetta and symphony that builds on a theme underpinned by a crashing behemoth of a bass part from M. Damoon, eventually developing into one of those lurching marching rhythms so beloved of the genre, to the accompaniement of a repeated vocal chant and sundry strange shouting. Nice stuff, indeed!

The Bhönus (demo 2008) is a more stripped down affair, and features a slightly different line up, and Udi Koomran has done a fine job tidying up the audio of these demos. The sound is more open and spacious, though the Magma influence is still writ large. I'm also put in mind of the crazier elements of Gong, especially with the crazed loon lead vocals and squealing sax runs on Bùmlo.

Some nicely busy but never intrusive drumming on Mlùez show that the good Captain Flapattak knows his way round his kit when he's not barking his odd utterances into a microphone. This track is jazz, Captain, but not as we know it. The ensemble of saxophones play tag with the guitar, everything else joins in, and we're off on another charge through the countryside leaving wanton destruction in our wake, the guitar of Thybo going on a slash'n'burn mission at the finale. It's a bit of a riot, this album!

The belated title track is left until last, and a quiet intro starts off on a slow trajectory, psychedelic guitar upping the ante, but pulling up short leaving us with a fleeting but curiously late period Soft Machine figure that takes its own languid path to some far-flung galaxy where off-kilter jazz-fusion at the edge of space charms our Zeuhl-obssesed companions with a laid back and woozy groove. This is different to what has gone before and shows that this mad Gallic band are not merely slaves in the temple of Magma.

Rhùn are a fine and capable band who show more than a little promise on this great little album. One hopes they further develop their twist on the Magma sound into something as unique as their undoubted talent deserves. One to watch out for in the future.

Buying links are few and far between, but you can get this from AltrOck in Europe, or from Wayside in the States (possibly!).
at July 23, 2013