King Crimson - The Road To Red 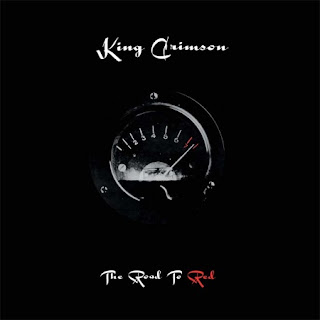 He powered down the central hub for the weekend, locked the pod, and made his way down the long flight of stairs to the exit. By the street door and lying on the floor was a small envelope. He picked it up, turned it over to inspect it, but found no indication of its origin; indeed, there was no writing or typed text on it at all. He opened the envelope and inside was a small craft knife and a handwritten note. "For the shrinkwrap - use with utmost caution" was the sum of its content.

Curiosity roused, as usual he took the Metrobus home, which deposited him at the city transport hub at the top of his street. He then walked the short distance down the hill to the entrance to his block. Taking the opportunity to forgo the elevator he ascended the three flights of stairs at speed, the only exercise he got all day in the week, and, breathing hard he arrived at his apartment door. He passed the keycard through the lock and stepped into the hallway.

When he walked into the living space, there it was. He approached it in a state of nervous apprehension. Viewed from the left side it appeared to be black. He noticed that subtly changed as he looked at it from different angles. It spoke to him without a voice. He sat down cross-legged in front of it and stared deeply at it. He was vaguely aware of a passage of time, for a faintly gnawing hunger eventually forced him to leave it and make his way to the kitchen. As soon as he opened the fridge door he realised he was missing it already. Hurriedly, he grabbed a bottle of beer, opened it and threw together a cold meat sandwich, and then rushed back to the living space fearing it would be gone.

It was still there. Instantly discarding his untouched sandwich, he took a deep slug from the beer bottle, put it down and resumed his position of supplication, this time at a different angle, to see if another perspective would be illuminating. Again it tugged at his soul. He was compelled to pick it up, and passing it from one one hand to the other he noticed it bacame heavier and heavier, weighing down on his very being, crushing his spirit and lessening his will to live. After an aeon that can have lasted no more than a minute, and unbowed by its ennui inducing properties he put it down, just then noticing a small tear in the wrapping. He was nothing if not determined, possessed of an iron will, he refused to be defeated by it. He rose from his cross-legged seated position and went back into the kitchen to retrieve a pair of scissors.

Then he remembered the craft knife. Changing direction, he rushed to the coat stand by the front door where he had hung his jacket, seemingly in another era. He retrieved the envelope, tore it open and extracted the knife, while running back to the living space. He sat back down in front of it. The tear was no longer there. Panic rose through the very core of his being. His heart rate was increasing alarmingly. He picked it up again in his left hand and it stung like a thousand wasps, but he could not let go. Shaking with the pain that had subsumed his fear, he discovered that simply by transferring it to his right hand, all the pain went away. He put it down again and the slight tear had magically reappeared.

Taking a measured approach, and with a steely gaze, he gently inserted the craft knife into the enticing opening offered by the tiny rip. Later, he could not recall removing the shrinkwrap, but he did remember being suddenly filled with a surge of joyous wonderment as everything was revealed in its stark beauty.

Days later, he told his psychepractor "I remember very little, but I know it took a long long time. And when it was over, it had really only just begun".

...Meanwhile, back in the real world, if you bought the 2009 40th Anniversary Red remix with the 5:1 DVD-A disc, and you already own the Great Deceiver box set and the Collectors Club CDs from this era, you should be more than sated already. After all, just how many versions of Starless does one really need? Over 20 apparently, and should Santa send me this exercise in excess for Xmas I won't complain!

Even more perplexing than this mammoth slab of audio largesse is the recent separate issue of yet another version of the Red album itself with a new stereo mix from Steven Wilson and Robert Fripp and a few bonus tracks. Of course, this "2013 Stereo Mix" is also included in The Road To Red box set, both in CD and Bluray formats, although I lost the will to live searching the thing for the bonus tracks on offer with this new separate CD issue. Some if not all of them are in the box, I guess.

Why issue this separately, exactly? Those of us without the fat wallets or the obsessive inclinations to buy the box set who already own the 2009 40th Anniversary reissue don't need it, so who is it aimed at one wonders? It all seems like milking the cash cow dry to me, but I suppose keeping three drummers happy to be with whatever they're happy with does not come cheap, just think of their dressing room cleaning bill, for starters! :)

Line up:
Get outta here!

But it from I Have More Money Than Sense And A Very Understanding Wife And Probably Need My OCD Sorting Out.com
at October 30, 2013