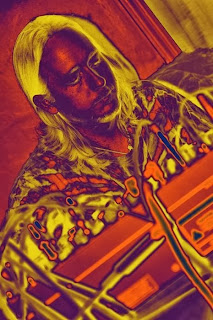 RyN is Ryan Melanson, one half of refreshingly different Floridian space rock duo BSI, whose fun ride through innerspace, Clevarity, was reviewed by moi on DPRP fairly recently.

When left to his own devices Ryan takes us on a near two-hour long trip through the cosmos, that is unhurried, charming, and just the right thing to get that 5-day-week monkey off your back, in the company of a smoke, or bottle of wine, or possibly both, who knows?

Mostly improvised, the approach is expanded on by Ryan as he explains The Garden of Up (featuring Rick Horton and Scott Fitzgerald) on his Facebook page:

"Introspective piece of music.... With found Shortwave radio bits mixed in that happened to be playing at the time I hit RECORD.... amazing how these bits ended up in key of the song, and rhythmically correct.."


The short notes by Ryan that go with each track under the "Info" link are useful insights into the creative process, and hints are given as to the "on the hoof" nature of the improvisations, as well as illuminating explanations of the composed pieces. The tracks sometimes recall early Tangerine Dream at their most ethereal, and at others exude a playfulness and a passion for contemporary experimentation, and the album runs in parallel with BSI's positive approach to making ye olde Kosmische Musik in a modern way.

An example of his ear for the odd, Ryan makes Kweeno sound like Wire jamming with Klaus Schulze. There be funk in them synth patches, oh yes! Proceedings get even stranger on The Flooje', as you can find out for yourself. Essentially this song is a BSI track in all but name as it features Jay Lewis, the other half of that spectral duo. Blink and you'll miss them.

Aided by electronic ambient musician Adam Matza, Droning Man, the longest track on the album, is a menacing synth soundscape in the manner of Pete Namlook that flies away to the outer reaches of the pairing's cinematic imagination, and, as Ryan puts it in the accompanying note to the track "it's a tale that you create as you hear it".

Ryan's principal instrument is the bass guitar, and he messes about with them to great effect on the superbly titled The Shark Attack of Papa, a "Reverse Bass Guitar" being used to unsettle the listener. The two fuzz basses and organ of Dreftoi make for a heavy Suicide-like sound, yet another twist to enjoy.

Similar to the BSI album, this is a compilation of recorded works stretching from 2000 right up to date, and the joins are seamless. The album shifts through styles without being at all disjointed. The aforementioned synth workouts sit neatly alongside Cure-like psychedelia, lush ambient pieces, sampled beats, and off-kilter strangeness to produce an album high on the charm quotient.

Damn, it's free, so what have you got to lose?