Read It In Books - Part One

...and magazines, and the "inkies" as they were affectionately known. Music for me is, as anyone who reads my nonsense must have worked out by now, an obsession. Even more so back in the days when that which came under the all-encompassing umbrella of "rock music" actually mattered to the teens-to-twenties generation.

This means that we of a certain age don't just listen to the music, we devour the printed word on the subject, too.

Here, I begin an occasional series of discussion, mini-review, call it what you will ("bollocks" perhaps?), of the countless thousands of words I have read on the subject of Mr Rock & Mrs Roll over the course of my many years on this planet. This will unavoidably be UK-centric, and there are obviously important books on The Noise I'm not even aware of, so feel free to make your recommendations in the Comments section at the end.
...

As a mid-teen I first bought what would soon become my Rock'n'Roll Bible, the New Musical Express. Back in those days there were three weekly black and white broadsheets devoted to "rock" as opposed to "pop" music. They were printed on flimsy newsprint, and the ink used to come off on your hands, hence the affectionate sobriquet "inkies".

If I may draw parallels between this triumvirate and UK newspapers, we had:

Melody Maker
(Rock) Establishment in outlook, looked down on its rivals, scared of change, worthy and somewhat dry in tone, never swore, dots its "i's" and crosses its "t's", this was the Daily Telegraph. Note for non-UK readers - the Daily Telegraph is read by those who always have and always will run the country, even when The Guardian's natural followers think they are running it.

Sounds
Brash, anti-intellectual, populist, swore a lot, no sense of irony, right wing, shouty, probably supports Chelsea. The only thing missing was a naked woman on page three. The Sun, obviously. Note for non-UK readers - Sun readers do not care who runs the country, as long as she gets her baps out.

The NME to its readers, this was the oldest and first music magazine in the UK, but little more than a Vanity Fair for the UK music industry in its early 1960s incarnation. It even had its own massive annual awards concert.

Sometime around the late 60s and early 70s, and before I bought it regularly, inspired by the likes of Rolling Stone, Creem, Oz and IT, the title underwent a radical overhaul and became hipster friendly, increasingly left wing, radical, and later into the 70s, up itself. I was going to use the word pretentious, but "up itself" conveys the intended meaning far better! Add in annoying and posturing, and pseudo-intellectual. The latter description meant its swearing and put downs were oh-so-tongue-in-cheek, to point where I sometimes threw it down in exasperation.

It was by far the brashest and boldest of the three, and I loved it. It was of course, The Guardian. Note for non-UK readers -The Guardian is written and read by those who occasionally think they do run the country, only to drown in good intentions and a stiflingly politically correct attitude, while Daily Telegraph readers smile knowingly, sat in their private clubs, snifter in hand.

From being a callow proto-youth and onwards I was steeped in the writings of Mick Farren, Charles Shaar Murray, and to the most extent by Nick Kent, the UK's very own Lester Bangs, a man who wore his excesses and bruises as a R'n'R badge of honour. All of these three to a greater or lesser extent took the rock star lifestyle as a given, in Farren's case legitimately as he came from the agit-prop hippy music scene, and played and released records with, amongst others, his own band The Deviants and The Pink Fairies. Farren was the reverse of the truism that all rock writers are wannabe musicians.

Slightly later, the Stalinist revisionism of Tony Parsons, and the trouser-wearer in their tempestuous relationship, Julie Burchill, suited the punk goings-on perfectly. The "up itself" pseudo-intellectualism referred to was personified in the post punk era by Ian Penman, a very annoying bloke who could write hundreds of words of self-referential Clever Trevor bollocks without once mentioning the music. That was probably when I started falling out of love with the rag.

So, let's have a look at three books by or about rock journos...

Nick Kent - Apathy For The Devil 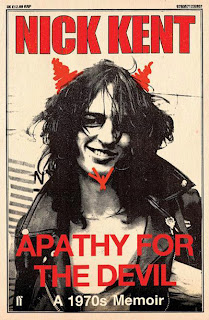 Nowhere is that old wannabe musician adage more true than in the case of Nick Kent, who it seemed was either very briefly in, or about to join, nearly every significant early punk band. Prior to punk Kent was allowed into the inner circles of the "TV through the 20th floor window" crowd of 70s excess, in particular The Rolling Stones and Led Zeppelin camps.

Kent frequently indulged in more substances than the people he was writing about, and often more than met his match with his mate/idol Keef, and has also been the cause of many fights. As he is built like an emaciated pencil he has therefore lost as more fights than Frank Bruno.

On a serious note, along with Charles Shaar Murray and Ian McDonald, Kent turned the NME into a force to be reckoned with, another marker that makes our first book to feature here a must read.

I think I read it in two sittings, so I heartily recommend it. A collection of Nick Kent's writings, The Dark Stuff should be a good read too. I don't own this one, as I read most of his NME writings at the time, but I probably should get it!

Jim DeRogatis - Let It Blurt: The Life And Times Of Lester Bangs 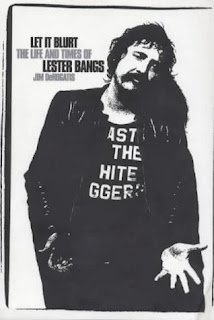 Of course, there would be no Nick Kent as we know him without the daddy of 'em all, the one and only Lester Bangs. With Creem and later Rolling Stone Bangs changed rock scribbling forever.

With his speed-freak-at-the-typewriter stance, Bangs introduced the music fan to gonzo journalism, channeling Hunter S Thompson and Jack Kerouac through the visceral outpourings of Iggy Pop and Moby Grape.

This biography chronicles his too short life in an honest and poignant fashion, telling the tale of an obsessive doomed romantic in an alternately sad, funny, but ultimately humane and reverential fashion.

Obviously this is THE must read for anyone wishing to take up the metaphorical pen in pursuit of The Noise. Read it in conjuction with Psychotic Reactions and Carburetor Dung and Mainlines, Blood Feasts and Bad Taste, both unputdownable collections of Bangs' writings. 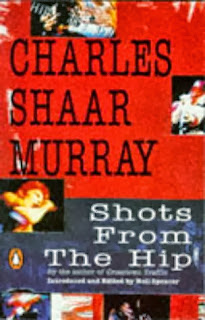 When I tired of Nick Kent's louche demeanour and so-hip-it-hurts attitude in the NME, I would always search out the articles and reviews written by CSM, as he was known.

More down to Earth than Kent but still living it large in the rock'nroll world, and not adverse to the leather trouser himself, and another disciple at the altar of Mr Bangs, CSM had a way with his descriptions of live gigs that made you feel like you were there.

This, an introductory line to a review of an Ian Dury And The Blockheads gig from 1979 - " "Good evnin' I'm from Essex..." The Hammersmith Odeon is soft and warm and awash with beer and love" tells the reader all they need to know.

It has been said that CSM is being somewhat revisionist in his still burgeoning hate for anything "prog", a stance that shone through in the very personal and as a result very hit and miss The Seven Ages Of Rock TV documentary series. Well, having picked up this book for the first time in years, I can safely say he has never particularly liked the genre, as this review, in its entirety, from Oz magazine in 1971 testifies: