Thieves' Kitchen - One For Sorrow, Two For Joy 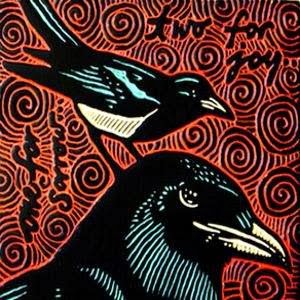 Why had I not heard of this fab band before reading my good friend Raffaella's review for DPRP? Who knows, but, casting my net far and wide on the endless seas of left-field music in my never ending quest for the new, I seem to have missed what is right under my nose. A case of not seeing the wood for the trees, methinks.

Right, that's enough metaphor stew to be going on with. Thieves' Kitchen are a UK/Swedish band, who because of their geographical spread are unfortunately unable to gig at the moment. I hope this changes soon, as I'd imagine that this intimate and thoroughly musical album would sound mighty fine being belted out live.

This is the band's fifth album since 2000, and in that time they have gone through several combinations of personnel, the only constant being guitarist Phil Mercy. Now down to a trio, the other two are Änglagård keyboardist Thomas Johnson, who played on the band's fourth album, 2008's The Water Road; and last but by no means least, singer Amy Darby, who has been lending the band her expressive but unaffected tones since 2003's third album Shibboleth.

For One For Sorrow, Two For Joy, the core members are joined by a very fine rhythm section in Paul Mallyon on the drums and Brad Waissman plucking bass, which goes some way to explaining a fleeting Canterbury atmosphere on some of the songs, coming as they do from that very fine modern Canterbury band Sanguine Hum.

Completing the guest list is Thomas's Änglagård band mate Anna Holmgren on flute, cellist Tove Törngren, and trumpet player Paul Marks. More Änglagård connections are present behind the mixing desk, and you would be forgiven for thinking that this is going to sound like a Scandi-prog workout. While that influence is there it is by no means overwhelming. This band have been going long enough to be confident of their own rather special identity, expressed through Phil's soaring guitar playing and Amy's unforced and distinctive voice.

Right from the first 16 seconds, starring Amy's reading of the nursery rhyme from where the album title originates, some individual but not too quirky stylings are apparent, stylings that make this album appealing to both the the lover of angular sounds, and to the connoisseur of more traditional prog fare. The rhyme reading heads straight into Deor, dominated by Phil's none too obvious guitar runs over Thomas's Mellotron backing. Amy's lyrics are highly poetic, dealing with the cyclical passage of time, and on the following Hypatia, cryptic allusions to fate and religious belief. The verses are structured in the vein of a jazz song, blending perfectly with highly skilled guitar runs.

An atypically "rock" riff forms the backbone of A Fool's Journey, but it is not straightforward and indeed is in 6/4, I'm told. Another treatise on fate and fortune with a historical bent and more than a hint of menace reflects the magpie nursery rhyme theme of both the album title and the lovely artwork, taken from woodcuts by Lisa Brawn.

Germander Speedwell, a flower steeped in folklore, continues the mystical leanings, and is introduced with the sound of a wind-up musical box and birdsong followed by the winsome combination of flute. cello, and acoustic guitar, evoking just the right atmosphere. According to legend, if you pick a speedwell your eyes will be pecked out by birds; "Damned are his eyes, the man who would try to pull up the bloom". This song develops along ambiguous lines as the pastoral backing wends its merry way. It is a truly beautiful thing.

The Weaver channels Sandy Denny era Fairport and illuminates the ease with which the band can transcend genre pigeonholing while effortlessly making the album feel complete and whole. The album ends with the slowly building and anthemic and rousing Of Sparks And Spires, a song that plays around motifs from English classical music, and features that most famous of prog time signatures, 9/8. What more could you ask for?

Thieves' Kitchen is a place where classic English pastoral folk and prog influences meet with a modernistic sensibility and some highly skilled composition and arranging to produce a charming and endlessly interesting listen.