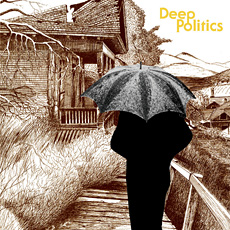 The album starts with the nonchalant groove of Future Primitive, almost Gothic in atmosphere, setting the tone for this, the 6th Album by Grails, nigh on undefinable psych-space rockers-postrockers (?!) from somewhere in the USA. There is a strong Swans influence pervading some of the tunes which while mostly calm have a mysterious dark cinematic undertone, something Swans specialised in particularly on fantastic albums such as The Burning World and White Light From The Mouth Of Infinity (if you've not heard these, you really should). This would explain Michael Gira's attraction to the band many years ago when he asked them to support Swans on tour. Gira was also instrumental in them getting their first record deal.

For some reason All The Colors Of The Dark, while continuing with the Gothic vibe, puts me in mind of Spaghetti Westerns. By Corridors Of Power things have taken a more spaced out vibe with some flute warbling on top of deeep bass drum and oriental vistas are imagined. Things slow down further on the minor key piano led title track, a mournful introspective piece of music that stops and then builds to a film noir climax, scratchy feedback guitar occasionally making an attempt to break through as the stings buck and sway. Quite and quietly magnificent.

If this is post-rock, then I might be fan after all, having been increasingly underwhelmed over the years by the likes of Mogwai and their ilk. Although the music on this album is not really complicated, and uses post-rock methods in its build and fall, it is far more than that over-hyped genre and there is more than enough going on in the instrumentation to keep this listener interested. Actually I don’t care what label I or anyone else might want to stick on this, it’s just good music, pure and simple.

Daughters Of Bilitis (mmmm. nice!) gently plinks along down a dark rainy alley, but watch out, for there be monsters, monsters like Almost Grew My Hair, which sees some guitar to the fore in an almost jaunty melody, and leans more towards a space-rocky vibe. A break in the song halfway though, and we’re off again, prodded back into life by some bass guitar from somewhere down an echoey corridor…..then guitar, and my word, that was almost a powerchord! I’m really digging this one, it’s a bit of a mini-epic. Building with a wah-fuzz noise, the song ends in a wail of guitar protest and we’re left in an orbit round a far off planet.

I Led Three Lives at 8:49 is the longest song on the album, another construct of ethereal menace led by a synth pulsebeat before a simple but effective guitar motif takes the song through to a calmer place.

Things conclude with Deep Snow started on a slowly plucked circular acoustic guitar line, which has an almost Spanish feel in contradiction to its title. The song brings us back to base in a cosseted gorgeousness of sound. Four minutes in and we’ve arrived back home where the sound of a full sonic orchestra greets our arrival, the song ends quietly with some slightly strange discordant piano chords.

This a is great album and stands out like a diamond in the recent slew of so-called prog releases as something that goes its own way without being a slave to the past. A fine effort.