In The Beginning - Part Two

In which we discover the important influences on what would become the UK Progressive Rock scene.

As an almost uniquely British phenomenon to begin with it is no surprise that most of the bands listed below are from the UK, but of course this is entirely subjective, as I'm sure we all hold differing opinions on this subject.

Morphing from psychedelic rock and blending influences from jazz, classical and experimental music, and featuring many jazz and classically trained musicians playing rock, progressive rock produced many moments of sheer brilliance as well as more than a few turkeys, particularly towards the end of its period of dominance.

These then are my thoughts on the bands that became or were an influence on UK prog rock...

Pink Floyd
Already blazing a trail with their unique blend of quirky psych-pop and longer more experimental journeys when playing live, Floyd's The Piper At The Gates Of Dawn album from 1967 (see Part One) was a benchmark for UK psychedelia. Syd's unfortunate meltdown meant that the following year's Saucerful Of Secrets was a stop-gap before the band's first truly prog LP, 1969's Ummagumma.

It is difficult to assess their influence, but I suppose the Barrett live era, on songs such as Interstellar Overdrive and Set The Controls For The Heart Of The Sun showed the world what could be done with two chords and a sequencer and a light show.

Formed as early as 1964 in Canterbury, England, this band were not so much influential, as they never released any recordings, as they were progenitors. Passing through their ranks at one time or another was entire original line up of Caravan, and two of the original line up of The Soft Machine, and Hugh Hopper, who joined the Softs after Kevin Ayers' departure in 1968. All of this led to that major prog tributary, and personal favourite, The Canterbury Scene.

Procol Harum
With their 1968 sophomore effort Shine On Brightly they introduced the world to the 20 minute song cycle, "In Held 'Twas In I". With Keith Reid's verbose and intriguing lyrics and Gary Brooker's R&B meets classical inspired tune-smithing, along with Robin Trowers' acidic guitar breaks here is the first true proto-prog epic.

The Who
"What are they doing here?" you may well ask, but don't forget that they gifted the world the "Rock Opera" with 1966 sophomore release A Quick One While He's Away, a format that would soon morph into the dreaded concept album. No other prog credentials to speak of.

The Moody Blues
Days Of Future Passed (1967) & In Search Of The Lost Chord (1968) both qualify as proto-prog efforts, the former being the first group/orchestra collaboration. It's probably only the pop leanings of Hayward & Lodge that stopped this band turning into a veritable prog monster. This band also discovered the early prog instrument of choice, the mellotron, hiding in a bush in Aston, Birmingham. They took it home, fed it, and the rest is history! What would King Crimson have sounded like without this band's influence is difficult to imagine.

The Pretty Things
1968's S.F. Sorrow is credited as being the first concept album, and were it not for record company admin errors it would have been released a year earlier, and given the right promotion could have given the ubiquitous Sgt Pepper a run for its money. If you've not heard this you should search it out. An underrated masterpiece in my opinion.

The Crazy World Of Arthur Brown

Their one marvellous self titled LP (1968) is full of weird effects and strange time changes and contained the keyboards of Vincent Crane, the man who wrote Fire, and the not yet over-the-top drumming of Carl Palmer. Both left the band in 1969 to form Atomic Rooster. The booming baritone of Mr Brown went on to grace Kingdom Come who released three prog classics in the early 70s. Well worth checking out. 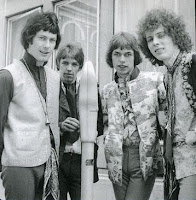 Great acid rock band unfairly mainly remembered for My White Bicycle, that although not that commercially successful were a musos band, having many connections within the London music scene, and they were even known to Frank Zappa, who was particularly enamoured of a certain Steve Howe's guitar playing. The band also boasted drummer John Charles Alder AKA "Twink" who later joined The Pretty Things, playing on S.F. Sorrow (see above), and later still The Pink Fairies.

The Mothers Of Invention
Fusing acid rock, jazz, and Mr Zappa's off the wall sense of humour, this lot were almost a category on their own, but were no doubt highly influential on the nascent fusion scene, both in the USA and in the UK. Releasing their first album Freak Out! in 1966, and Absolutely Free the following year, a die was cast. An oft quoted review from the LA Times by Pete Johnson describes Freak Out! thus...

I guess you might call it surrealistic paintings set to music. Not content to record just two sides of musical gibberish, the MOI devote four full sides to their type of 'artistry.' If anyone owns this album, perhaps he can tell me what in hell is going on...The Mothers of Invention, a talented but warped quintet, have fathered an album poetically entitled Freak Out, which could be the greatest stimulus to the aspirin industry since the income tax...

Haha! I wonder what he made of Captain Beefheart's Trout Mask Replica? Which brings us neatly to Zappa's buddy..

Captain Beefheart And His Magic Band
With 1967 debut offering Safe As Milk the slightly crazed Van Vliet and his crew dipped their first tentative toes into the waters of avant-blues, which would later see them almost drowning with 1969's Trout Mask Replica, an album so strange that in spite of being played many many times over the years chez moi remains just out of reach. What I mean to say is I still cannot decide if it was genius or trash. Beefheart & Zappa must have been an influence on Henry Cow, Samla Mammas Manna, and the rest of what would become the Rock In Opposition movement.

The Zombies - Came up with Odyssey & Oracle in 1968, a true pop-psych masterpiece from the band that morphed into mid-table proggers Argent.

Ian Carr - UK jazz trumpeter who formed the fusion band Nucleus in 1969, deserves a mention for having most of the UK jazz-prog alumni passing through his band's ranks at one time or another.

Next in Part Three - We'll skip the obvious albums in the first wave prog explosion and highlight some of the lesser known but still wonderful recordings of the era.