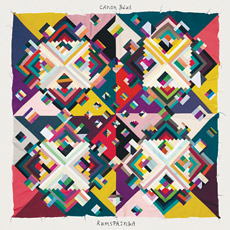 Canon Blue are essentially Daniel James with a whole host of mostly Scandinavian back up. As part of Efterklang’s touring band, Daniel, while not on the road with the Danish alt-pop ensemble had been intermittently working on this, his second album as Canon Blue. This may explain why each of the eleven songs here are bookended with the names of US cities.

There were sessions in Iceland with Amiina, better known as Sigur Ros’ string section, and the album was put together in Copenhagen with producers Mads Brauer and Casper Clausen of Efterklang.

Opening song Chicago (Chicago) features some choppy modernistic classicism to start, but soon finds its way into a gorgeous pop groove propelled along by a jaunty horn led electronica melody. “I keep searching for the thrill of it all” is the opening lyric and sets the theme for the album, with Daniel by turns questioning, optimistic, resigned, in awe, and in love, for the album is a road movie of the emotions. Trite the lyrics are not, and it’s good to hear such intelligent lyrics on a pop album for once.

The first and obvious single off the album was Indian Summer (Des Moines) which has some more swoonsome strings while Daniel intones a song of  weariness and longing as the strings weave in and out of the harmonies like a breeze through a wheat field. Utterly charming and seemingly effortless.

The interplay of strings, electronica and close vocal harmonies is prevalent throughout the album and is also what makes it so attractive, like a yearned-for hug. The European influence is all over the strings and glockenspiel intro to Heavy Heart (Minneapolis A) which morphs into a Madonna-like pop song. Following song Lulls (Memphis) is the only instrumental on the album and gives us a deeper look into the initially simple sounding, but on closer inspection densely layered music. A Steve Reich/John Cage influence is heard. At only just over two and a half minutes I would have liked to have heard more of this.

The choppy horns of the opening song are back on Fading Colors (Bloomington) backed by fast and complex rhythms that I would like to think were played although they sound programmed. A Native (Madison) strays into fast Arcade Fire territory and is the most upbeat tune here. I defy you not to dance round the room to this one. The album ends with Andalusia (Davenport) in an understated fashion and lets us down gently from the Canon Blue train. I await its return to Platform Alt-Pop with interest.

Line up:
Sorry, no info other than what I've scribbled above!

Buy from Temporary Residence
at August 29, 2011